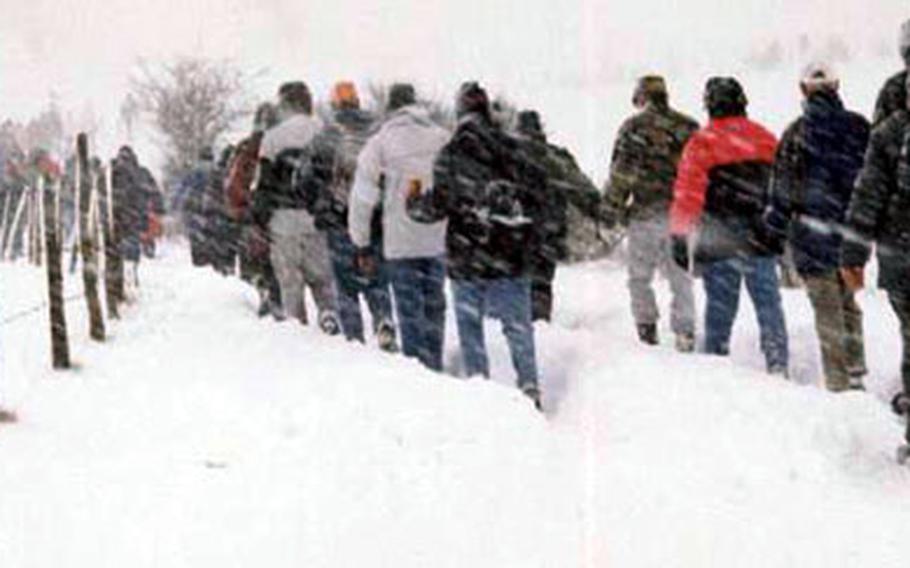 Participants to the 2003 edition of the Historical Walk in Bastogne slowly progress in the snow. They experienced the same weather conditions soldiers taking part in the Battle of the Bulge did in 1944. This year, the walk will be on Dec. 17, departing at 8 a.m. from the Bastogne Sports Center. (Special to S&S)

Later this month, Maj. Boris Brglez plans to pack up his Army uniform and Kevlar helmet and head off to a battlefield.

Every year organizers hold a memorial walk that covers a section of the Allied perimeter around Bastogne. The event is part of the commemorative ceremonies marking the Battle of the Bulge of December 1944.

The walk &#8220;honors not just our fallen comrades, but the people serving in Iraq,&#8221; said Brglez, who is based in Landstuhl, Germany.

Brglez will be among hundreds of Americans expected to come from near and far to take part in the Dec. 17 walk. Participants will have the choice of walking 6, 14 or 20 kilometers.

&#8220;It matters not to me that [the Battle of the Bulge] was an Army event,&#8221; said Air Force Chief Master Sgt. Gregory M. Fleming, assigned to Geilenkirchen Air Base, Germany. &#8220;I feel, as an American servicemember, that I owe it to my fallen comrades to learn more about what they accomplished.&#8221;

What the Army achieved in and around Bastogne 61 years ago is now as legendary as D-Day or the battle for Iwo Jima. Despite being surrounded, soldiers, such as those of the 501st Parachute Infantry Regiment, 1st Armored Division, repelled numerous attempts by the German army to take Bastogne.

More than six decades have passed, but the people of the Benelux &#8212; which includes Belgium, the Netherlands and Luxembourg &#8212; have not forgotten the sacrifices the Americans endured in liberating them from Nazi Germany.

The Battle of the Bulge actually encompassed a series of battles fought over several hundred miles from Dec. 16, 1944, to Jan. 25, 1945. More than 1 million combatants took part, and U.S. forces suffered 19,000 deaths.

This year, the walk covers the eastern defensive line, which was held by the 501st PIR. It takes about four or five years for the annual walk to cover the entire perimeter.

In addition to the walk, which begins at 8 a.m., there are several other events. There will be wreath-laying ceremonies and the traditional &#8220;nut throw&#8221; from the Bastogne town hall balcony in the afternoon.

&#8220;Everyone who comes to Europe should come to Bastogne,&#8221; said Brglez, who is the deputy commander of the veterinarian lab at Landstuhl.

While this is a popular time of year to visit Bastogne, getting a hotel room can be a challenge. Brglez, for example, is staying in a hotel about 10 miles away in Luxembourg.

Despite the crowds, hundreds of U.S. servicemembers visit Bastogne every December for the anniversary. Last year, the 60th anniversary, some came from as far away as Naples, Italy, just to take part.

This year, places like Geilenkirchen, a NATO base, expect to have upward of 200 people in attendance.