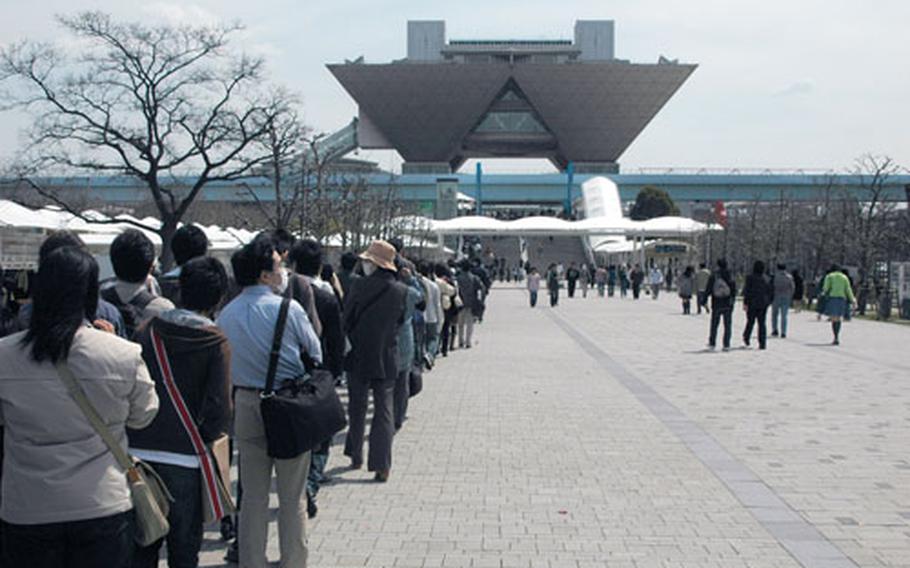 Thousands of fans line up Saturday for the Tokyo International Anime Fair, hoping to get a glimpse of new and coming anime-related products. The early morning fans stretched out for about half a mile. The fair, which opened Thursday, is one of the largest anime trade shows in the world. (Bryce S. Dubee / S&S)

Thousands of fans line up Saturday for the Tokyo International Anime Fair, hoping to get a glimpse of new and coming anime-related products. The early morning fans stretched out for about half a mile. The fair, which opened Thursday, is one of the largest anime trade shows in the world. (Bryce S. Dubee / S&S) 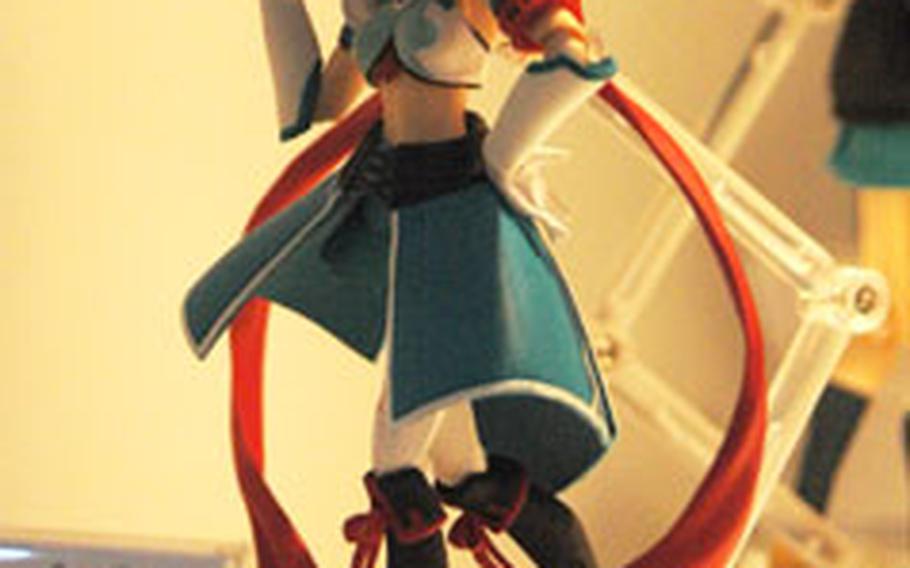 An anime figurine at the Max Factory exhibit of the Tokyo International Anime Fair was among many attractions at the Tokyo fair. (Bryce S. Dubee / S&S) Even Spongebob Squarepants made an appearance Thursday through Sunday at the Tokyo International Anime Fair. (Bryce S. Dubee / S&S) Dressed as characters from the upcoming anime feature “Soul Eater,” workers at a booth promoting the film pose for pictures during the fair. (Bryce S. Dubee / S&S)

TOKYO &#8212; Anime, a distinctly Japanese form of animation, has attracted fans around the world.

On Saturday, thousands of eager anime fans lined the streets near Tokyo Big Sight Convention Center to attend one of the largest anime trade shows in the world, the Tokyo International Anime Fair.

In its seventh year, the fair has grown dramatically in size, attracting more than 100,000 attendees during its four-day run in 2007, according to a news release. This year, more than 50,000 people attended the fair on Saturday alone. The fair opened Thursday and was to run through Sunday.

&#8220;It was rather overwhelming, how many people were present,&#8221; said Ian Fitton, a member of the Computer Users Group of Yokota, who was at the fair Saturday. He and seven other members of the group rented a van to drive to the event.

When the doors opened on Saturday morning, thousands of people already stretched from the exhibition hall entrance for about half a mile.

Fitton said it took more than two hours to get into the fair.

Inside the crowded hall, about 200 anime-related companies showed off products ranging from three-dimensional technology to video games to college art programs, plus upcoming shows and movies.

Throughout the exhibition hall were flashing lights, massive video screens, giant robots and attractive women in anime costumes, all vying for the attention of the massive crowd.

&#8220;What I liked most was probably the huge display of figures by Max Factory,&#8221; said Airman 1st Class Joshua Miller, who came with the Yokota group. He said he collects anime figurines and liked being able to see new sets that he has started or is planning to collect.

Fitton also gravitated to the figurines and the people dressed in anime costumes, known as cosplayers.

&#8220;It was entertaining to see some characters I recognized brought into a real-life form,&#8221; said Fitton, a fan of action figures since he was a kid.

The fair featured displays promoting two films being released this month, &#8220;Soul Eater&#8221; and &#8220;Lupin III Green vs. Red.&#8221; It&#8217;s the 40th anniversary for the Lupin character, who has appeared in 228 television episodes, eight theatrical films and 13 TV movies. The Lupin display showed memorabilia from throughout the history of the world&#8217;s most wanted thief.

Miller said he had a good time checking out upcoming shows and products and plans to come back next year, but the airman said he was a little disappointed at the lack of fan-friendly activities at the fair.

&#8220;To me, the convention seemed to be more of a huge trade show. There were not any of the cosplaying, gaming or fun things that they have at most American [conventions],&#8221; he said, adding that he would have preferred not only more activities but also a larger merchandise area.

Fitton hopes to return next year but only if he can go with a group of people again, contending that half the fun came from enjoying the fair with other Yokota fans.

For more information on the Tokyo International Anime Fair, go to: http://www.tokyoanime.jp/