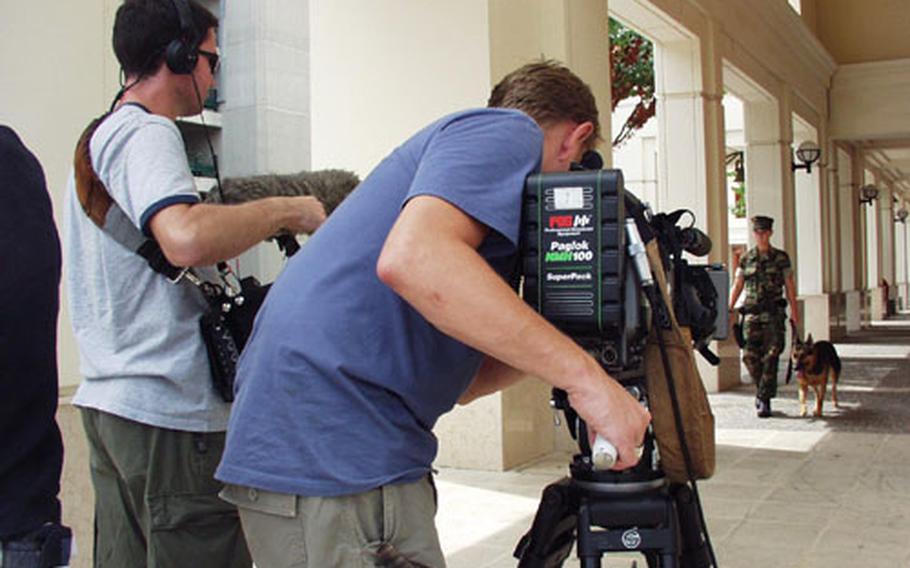 And thousands more people will see the master-at-arms and her German shepherd on the job when the Animal Planet television channel airs footage that a camera crew shot in Naples for a new series.

&#8220;K-9 Boot Camp&#8221; was spurred by the popularity of a 90-minute special on military working dogs at Lackland Air Force Base in San Antonio. Pankratz was featured in the special during a Military Working Dog Handler course.

A crew with the Washington, D.C.,-based Discovery Communications Inc., the parent company of the Animal Planet channel, is spending a few days in Capodichino and Sigonella, Sicily, to catch up with the dogs and sailors and see how their real-world jobs compare with their training.

Film from Lackland shows how the puppy program breeds dogs and fosters them out to families for a year. In Norfolk, Va., a perky springer spaniel named Molly searches submarines before they leave port.

The crew scored great footage of dogs on the Mexican border making a marijuana and cocaine bust, &#8220;which was just fantastic for the customs people and for us to film it,&#8221; said Fisher, 35, from Bristol, England.

Overseas, footage features dogs at Ramstein and Spangdahlem air bases, Germany. A crew also followed active-duty dogs securing a base in Kirkuk, Iraq. Fisher said she quickly developed a respect for the servicemembers and their dogs working in the heat. About six men shared a tent with eight dogs.

After Naples, the crew heads to Sigonella. Former Lackland students stationed on Okinawa also will be filmed.

It is the second time in two weeks that Naples masters-at-arms are in the spotlight. Last week, a crew shot footage in Naples, the only non-U.S. site for a recruiting video on the masters-at-arms program.