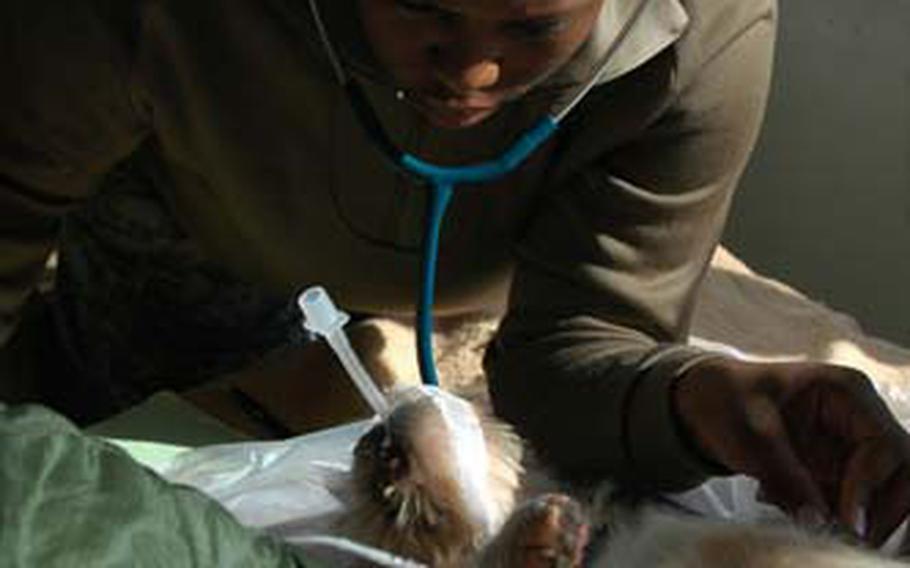 Spc. Queaner Jones, of Sasebo Naval Base, monitors a dog&#39;s vital signs Tuesday just before it is about to be operated on. Army veterinary staffs from across Japan met at Camp Fuji, Japan, this week for training that included setting up a field clinic for spaying and neutering dogs. (Bryce S. Dubee)

On Tuesday, a group of Army veterinarians from mainland Japan and Okinawa brought something new to the mountainside base: dog surgery.

As part of the weeklong training, 50 soldiers with the Japan District Veterinary Command set up a small clinic to spay and neuter dogs from a local animal shelter.

Set up in an empty barracks bay, the training was to help prepare veterinary staff members for dealing with the less-than-satisfactory conditions they could face if deployed on a humanitarian mission.

"In the real world, you have to turn whatever space you have to make a suitable clinic," said 1st Sgt. Mark Newsom, the command&#8217;s first sergeant.

"This gets the soldiers and vets to react to an environment they&#8217;re not used to," said Maj. Kent Vince, the Okinawa veterinary services branch chief, pointing to an improvised intravenous stand made from a mop handle and surgical tape. "When we deploy, we don&#8217;t always have the luxury of having our nice operating room."

On Tuesday, members of the Nagashima family who run a local animal shelter, said they appreciated the free medical services for the animals in their care. The procedures carried out at Camp Fuji normally would cost more than $150 per animal, they said.

"There was a lot more staff working with each animal than you would see in a normal clinic," said Mrs. Nagashima, who declined to give her first name. "So we know they are being well taken care of."