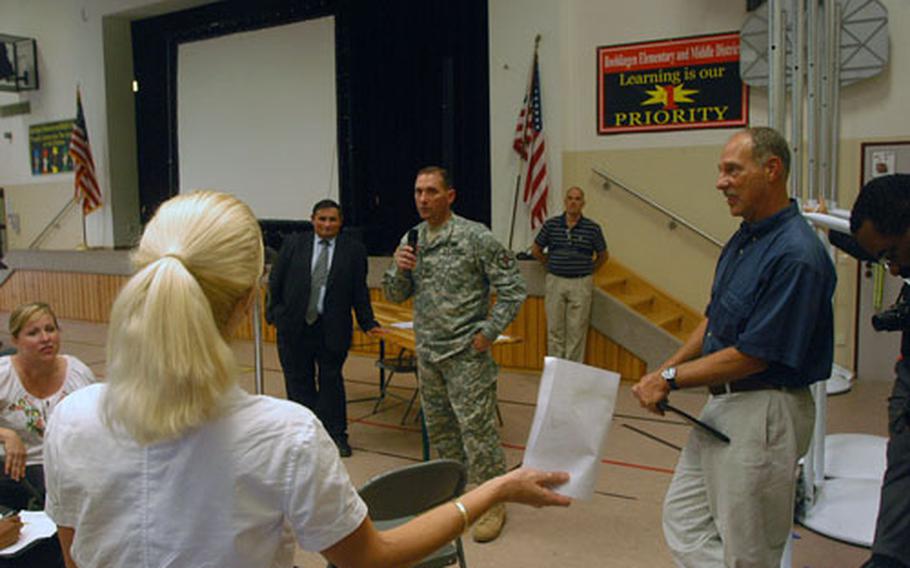 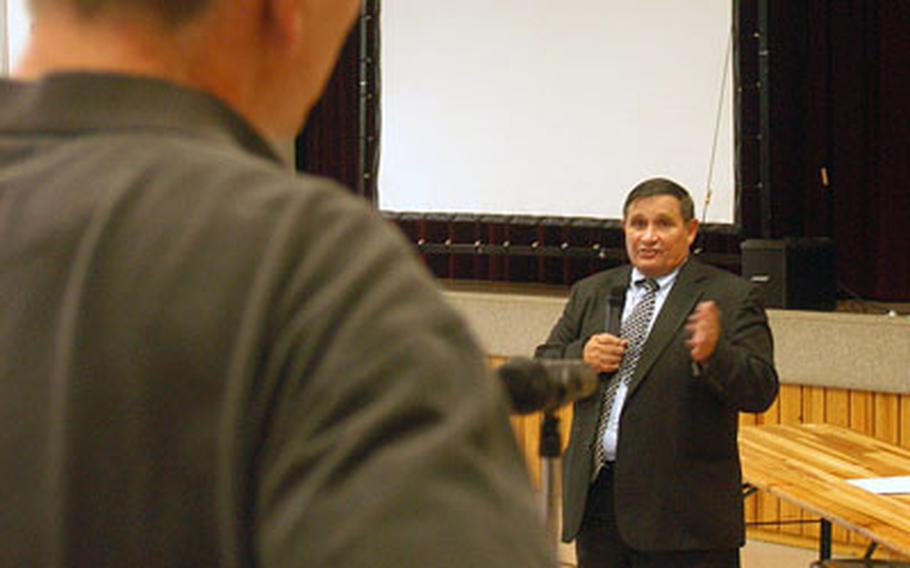 A parent confronts Mike Thompson, Bavaria District Superintendent, at a town hall meeting at Boeblingen Elementary-Middle School near Stuttgart, Germany. Angry parents convinced administrators to reconsider new school zones that would cause some kindergarten students to be bused up to 90 minutes each way to school. (Charlie Coon / S&S)

BOEBLINGEN, Germany &#8212; An incensed mob of Stuttgart parents on Wednesday night verbally bludgeoned officials into rethinking a plan &#8212; unveiled just days before the start of the school year &#8212; to redraw school district zones.

After listening for an hour as parents lit into Bavaria District Superintendent Mike Thompson and others, Col. Richard M. Pastore Jr., the new commander of Army Garrison Stuttgart, took the microphone and told the jeering crowd, &#8220;I&#8217;m going to call this session to a close because we&#8217;re going to re-look at this.&#8221;

Pastore said he would ask the planners to come up with a better plan by the end of the week.

Pastore said he ended the meeting &#8220;because I realized we couldn&#8217;t adequately address some of the concerns of the parents.&#8221;

Among those concerns: toilets for the long bus rides, and enough monitors to keep order on the buses.

After Pastore ended the meeting, parents continued to vent for another hour before dispersing.

Decisions affecting school districts, bus routes, buses and bus monitors are the responsibility of Department of Defense Dependents Schools-Europe, but the garrison commander can lobby school administrators on school-related decisions.

The crowd inside the Boeblingen gymnasium was standing-room only, much like the middle-school classrooms on the building&#8217;s third floor when school is in session.

After a short PowerPoint presentation, parents lined up behind a microphone mounted on a stand. They then proceeded to let fly.

One man demanded the name of the person who signed off on the plan. He was told Diana Ohman, the DODDS-Europe director.

Thompson retorted by blaming incoming families for moving into the crowded Boeblingen school district, located south of the city and near Stuttgart&#8217;s main bases.

The meeting was reminiscent of last year, when outraged parents chastised administrators for taking the centrally located middle school and breaking it into two smaller schools located on opposite sides of the city.

That move sent many middle-school students to Robinson school, located north of the city and away from the rest of military community, which stressed their ability to participate in extracurricular activities or take high school-level courses.

For some involved in last year&#8217;s controversy, Wednesday&#8217;s meeting felt like a recurring nightmare.