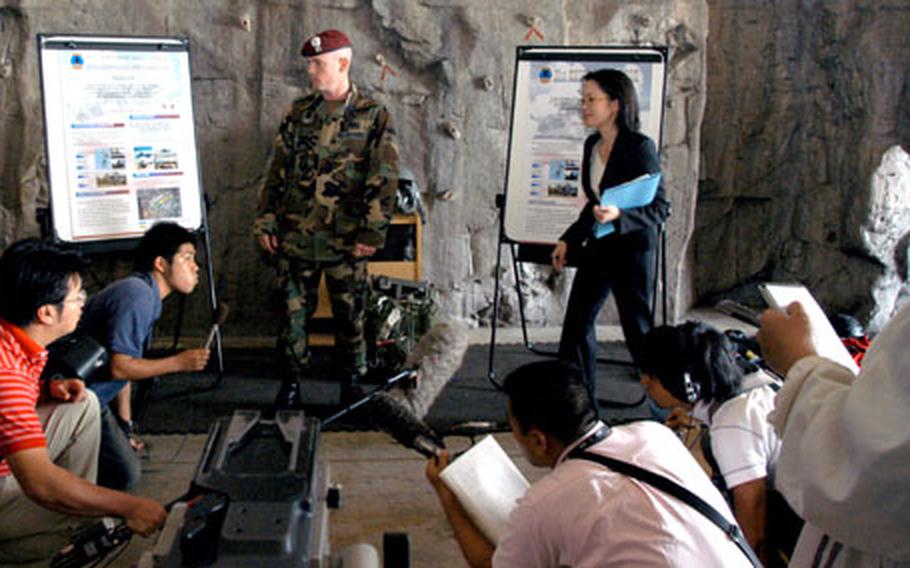 Air Force Capt. Charles Bris-Bois of the 31st Rescue Squadron listens to a question from a local reporter during a briefing on parachuting procedures with the media. Nine members of the Guardian Angels did a jump Friday at Kadena Air Base. (Will Morris / S&S)

Air Force Capt. Charles Bris-Bois of the 31st Rescue Squadron listens to a question from a local reporter during a briefing on parachuting procedures with the media. Nine members of the Guardian Angels did a jump Friday at Kadena Air Base. (Will Morris / S&S) 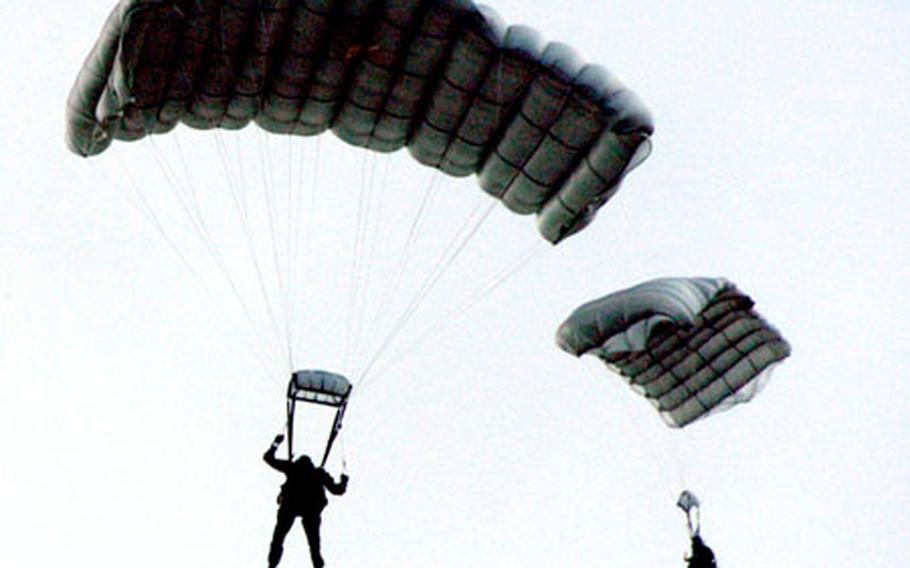 Two parachutists glide down to a landing zone on Kadena Air Base on Friday. (Will Morris / S&S) 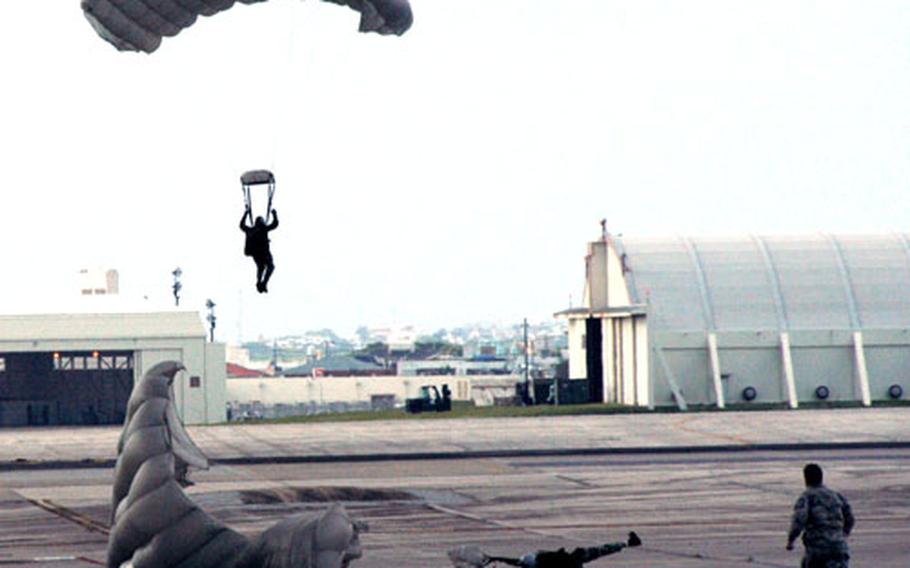 KADENA AIR BASE, Okinawa &#8212; They started out as nine dots hurtling through an opening in the clouds.

Seconds later, the dots blossomed into nine parachutes carrying men. Minutes later, all nine were on the ground.

On Friday, nine pararescue jumpers from the 31st Rescue Squadron, also known as the Guardian Angels, conducted a HALO, or High Altitude, Low Opening, jump over the airfield at Kadena Air Base. The jump was one of eight each man is required to do every three months to stay proficient.

Air Force Capt. Charles Bris-Bois, the director of operations for the squadron, explained that most jump training on Okinawa is done either on Ie-Shima Island or at White Beach.

Using charts and graphs before the jump, Air Force officials explained to the more than 20 local media covering the event about military jump procedures and safety measures.

They explained that doing jumps at Kadena, although rare, is more convenient to plan and execute.

However, Bris-Bois added that his squadron can jump and then train off the island, as opposed to the airfield, where they are only allowed to conduct jumps.

Friday&#8217;s jump was almost canceled because of high winds. Beforehand, Bris-Bois said the jump would be unsafe to conduct in winds gusting at speeds higher than 18 knots.

All pararescue jumpers but two landed on target at the airfield. One drifted away from the field toward some buildings; the other landed in a tree on the base&#8217;s golf course, according the base officials.

Bris-Bois said it was a good thing the jump happened at Kadena.

In a press release, public affairs officials said the two airmen suffered only minor scrapes. They said the control tower registered winds at 17 knots at the moment of the jump.

&#8220;The event today illustrates that need for our pararescuemen to conduct this type of training to remain proficient and to be ready to support their commitments to the U.S.-Japan Security Alliance,&#8221; the press release read.

The squadron is one of a few of its type of units specializing in personnel recovery missions, search and rescue, and delivering humanitarian and medical aid.

Last month, 14 airmen from the squadron returned from a deployment to Iraq. The squadron also has saved several lives in rescues around the island.