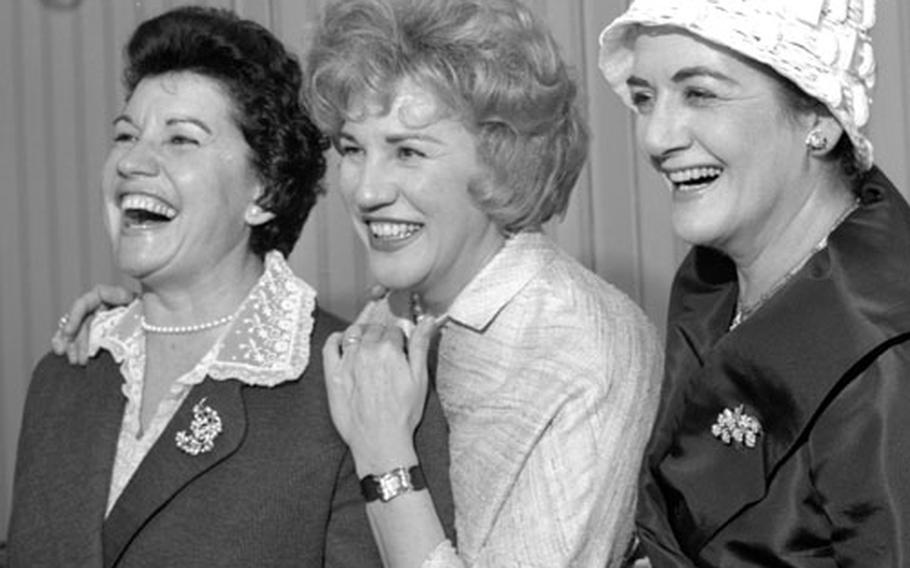 Buy Photo
The Andrews Sisters — Maxene, Patty and LaVerne, left to right — in Germany in 1961. (Tony Evanoski/Stars and Stripes)

WIESBADEN, Germany (S&S) &mdash; The Andrews Sisters, who haven't appeared before a military audience since the end of World War II, are bringing their energetic vocalizing to servicemen again.

The trio, which became an American institution belting out such hits as the "Beer Barrel Polka" for troops during the '40s, is making four one-night stands at military installations in Germany.

Winding up a tour of the Continent, Maxene, Patty and LaVerne are scheduled to begin eight weeks of concerts in England following the servicemen shows, their first since they became household names during the war.

"The last time we appeared before a military group was at Naples, Italy, in August 1945," Patty recalled. "We were doing a show for soldiers headed for more fighting in the Far East.

"During the show I was asked to announce the surrender of Japan. Not one of the thousands of persons present made a sound after I read the announcement. They figured it was a bum joke.

"The startling news and the silent reaction from the troops so stunned us," Patty added, "that we stood in the middle of the stage and cried."

The trio, says Patty, is looking forward to its chance to perform again for servicemen.

"During the war we were female Elvis Presleys, and made a big hit with the troops," she said. "We know we can entertain the young soldiers of today and we only hope they know us."

On Friday they will appear at Hahn Air Base for shows at the officers and NCO clubs. They wind up their tour with shows Saturday at Baumholder EM and NCO clubs.