Andersen's flight line has been busy with typhoon relief 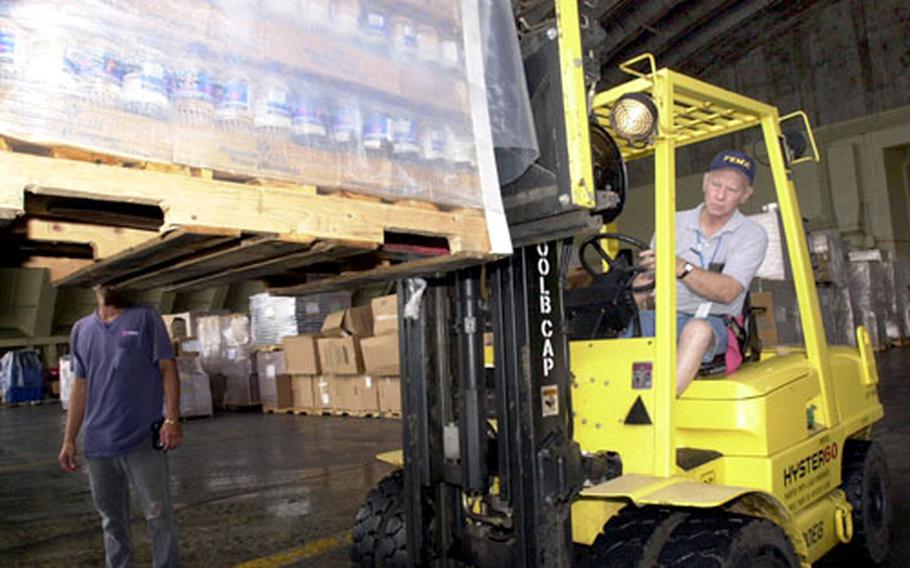 ANDERSEN AIR FORCE BASE, GUAM &#8212; The runway on Guam hasn&#8217;t been this busy since the peak days of the war in Afghanistan.

But then, recovering from a typhoon can be like combat.

In just 48 hours this week, 37 aircraft delivered relief supplies to Andersen for the island&#8217;s residents and U.S. military installations suffering the effects of Super Typhoon Pongsona.

Given that many of the supplies needed for Guam are from Federal Emergency Management Agency warehouses in the States, transportation is &#8220;very, very critical,&#8221; said Tony Robinson, FEMA&#8217;s logistics section chief.

FEMA, which is coordinating the relief effort, is using Andersen as its main distribution center on the island. Supplies are flown in from the States, sorted and moved to tractor-trailers for delivery.

Military planes are doing much of the muscle-work: Unlike commercial jets, military aircraft can carry heavy equipment such as forklifts and bulldozers, FEMA officials said.

Ten of the 37 aircraft were civilian planes contracted by the federal government, such as 747s; the others were military charter flights, Gibson said.

Andersen&#8217;s runway was operational a day after Pongsona left the island. Planes are landing 24 hours a day; lights on the flight-line are powered by batteries and generators. One challenge, though, has been the long turn-around time posed by geography.

FEMA officials did not have an estimate on relief effort costs, but they said supplies are expected to pour in for &#8220;a couple of months.&#8221;