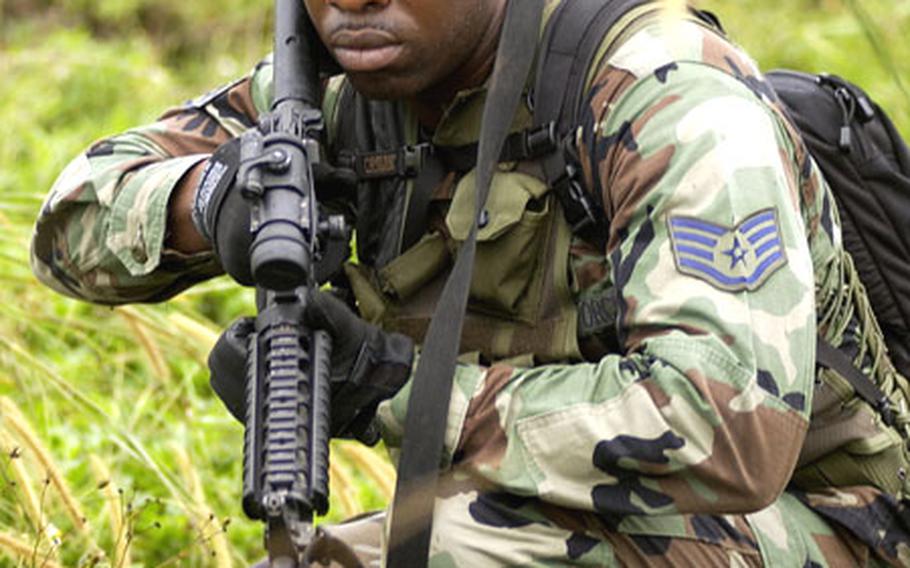 Staff Sgt. Deroni Brown performs tracking recently for a tactical tracking class. As part of the 736th Security Forces at Andersen Air Force Base, Brown undergoes plenty of training — some of which may have helped him save a man’s life Tuesday after an apparent heart attack. (Courtesy of U.S. Air Force)

Staff Sgt. Deroni Brown on Tuesday was helping a family move in Dededo near Andersen Air Force Base on Guam when he heard something hit the floor upstairs.

When he ran up he found an elderly man crouched in a corner and breathing heavily, apparently suffering a heart attack.

Brown ran to his car to grab a first aid kit, returned and found the man, Thomas Matanane, had only a faint pulse.

Something clicked, he said.

He and another man laid Matanane flat and worked as a team to perform cardiopulmonary resuscitation.

As Brown began doing chest compressions, he heard a cracking sound &#8212; just like his CPR trainers had once warned him &#8212; the sound of cartilage snapping.

He ran through a mental checklist for CPR and slipped into a zone.

He said he doesn&#8217;t remember the 15 to 20 minutes he performed chest compressions as his partner did mouth-to-mouth breathing on Matanane before paramedics arrived.

After helping the paramedics load Matanane into an ambulance, Brown said he realized he was covered in sweat and exhausted.

Later that night, his wife called the Matanane&#8217;s family and the paramedics, who told her the CPR actually saved the man&#8217;s life.

Brown said he never thought much about the annual first aid training he receives.

But he does now.

Brown is with the 736th Security Forces, part of the 36th Contingency Response Group.