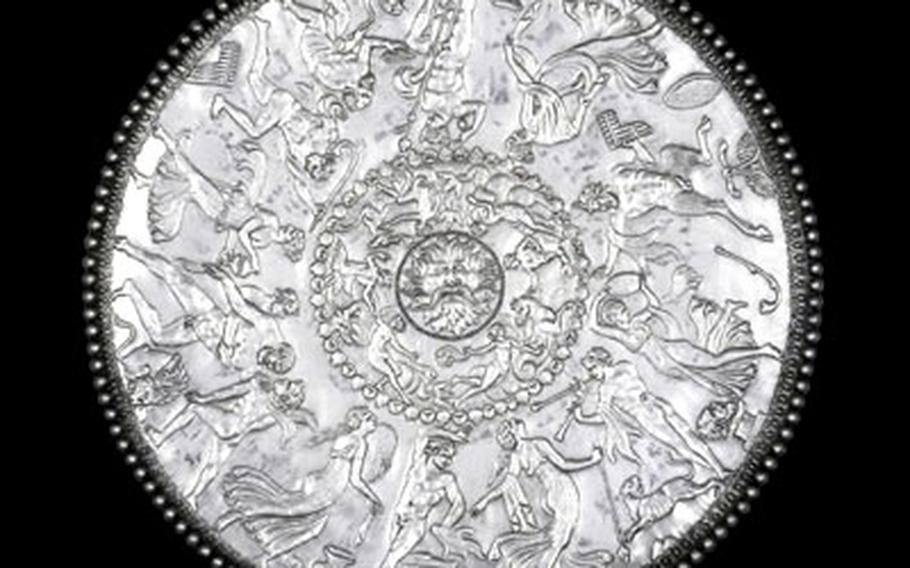 The Great Dish is the largest piece of the Mildenhall Treasure. The dish’s design alludes to the worship and mythology of Bacchus on land and in the sea. (Courtesy of the British Museum)

The Great Dish is the largest piece of the Mildenhall Treasure. The dish’s design alludes to the worship and mythology of Bacchus on land and in the sea. (Courtesy of the British Museum) Some of the Roman silver spoons that make up part of the Mildenhall Treasure. (Courtesy of the British Museum) 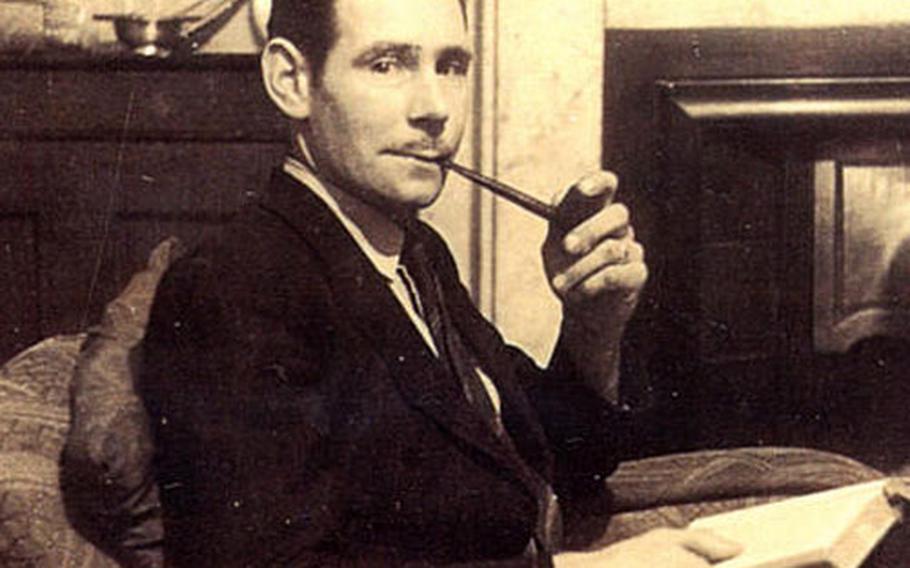 Mildenhall resident Sydney Ford helped dig up the Mildenhall Treasure, which sits on his mantlepiece behind him, during World War II. (Courtesy of the British Museum)

While the farmland off RAF Mildenhall yields a bountiful treasure of food every season, what one farmer dug up in January 1942 was a little older and longer-lasting than sugar beets or potatoes.

Farmer Gordon Butcher of West Row found 34 Roman silver dishes, bowls and serving pieces believed to be from between 300 and 400 A.D.

One of the most important collections of late-Roman silver tableware, the pieces came to be known as the &#8220;Mildenhall Treasure&#8221; and were moved to the British Museum in London.

&#8220;The Mildenhall Treasure is perhaps the most magnificent example of late Roman craftsmanship from the British Isles,&#8221; said John Davies, chief curator for the Norfolk Museums and Archaeology service.

The treasure currently is touring Britain and is being displayed at the Norwich Museum, about 50 miles northeast of RAFs Mildenhall and Lakenheath.

&#8220;When it was found, it transformed the popular view of Roman Britain as a cultural backwater into one of a prosperous province,&#8221; he said.

The find was unearthed by Butcher near the site of an old Roman villa, a few hundred yards off the west end of Mildenhall&#8217;s runway.

Butcher dug up a large metal dish as he was plowing, according to information on the Web site for the Mildenhall Museum, which holds a replica of the display. Butcher called his boss, Sydney Ford, an agricultural engineer and antique collector.

&#8220;The individual bowls, spoons and, in particular, the Great Dish, are of the highest artistic brilliance,&#8221; Davies said.

&#8220;Together with other rich hoards buried in the final years of Roman Britain, Mildenhall reflects the great material wealth within East Anglia at that time.&#8221;

At the time of the discovery, Ford or Butcher thought what they found wasn&#8217;t that valuable, believing the items to be either pewter or lead.

Ford took the items home, even having one of his workers straighten a few bent pieces. He placed them on his mantelpiece and there they sat until after World War II.

A chance visitor to Ford&#8217;s home, according to the Mildenhall Museum&#8217;s site, realized that the finds were actually silver, and as with any large historical finds in Britain, the coroner was told and an inquest was held.

The items were declared a treasure trove on July 1, 1946, and became Crown property.

Initial estimates of the find&#8217;s value was 50,000 pounds. Like others whose historic finds are claimed as treasure, Butcher and Ford received a reward. They split 2,000 pounds.

The Mildenhall Treasure has since been displayed at the British Museum, but is now on its two-year tour. Full-sized replicas of the items are on display in both the British and Mildenhall Museums.

Despite the large amount of publicity behind the treasure &#8212; and its importance to both British and Roman history &#8212; its original owners are still unknown, although the British Museum&#8217;s site says that it was probably a person or family of considerable wealth and high social status.

Even though the Mildenhall Treasure isn&#8217;t in Mildenhall, or at its permanent home at the British Museum in London, both places have exhibits and replicas of items from the find and are worth visits.

The Mildenhall Museum is open from 2:30 to 4:30 p.m. Wednesday to Saturday through Christmas. On Fridays, the museum opens at 11 a.m.

More information on the museum, and the Mildenhall Treasure, is available at www.mildenhallmuseum.co.uk.

The actual Mildenhall Treasure is currently at the Norfolk Castle Museum and Art Gallery as part of the British Museum&#8217;s traveling Buried Treasure: Finding Our Past exhibition.

It will be on display in Norwich until Jan. 15.

Admission fees are 5.95 pounds for adults to visit all of the museum zones. Kids are admitted for 4.45 pounds.