Anbar’s rule of the road: Stop when told 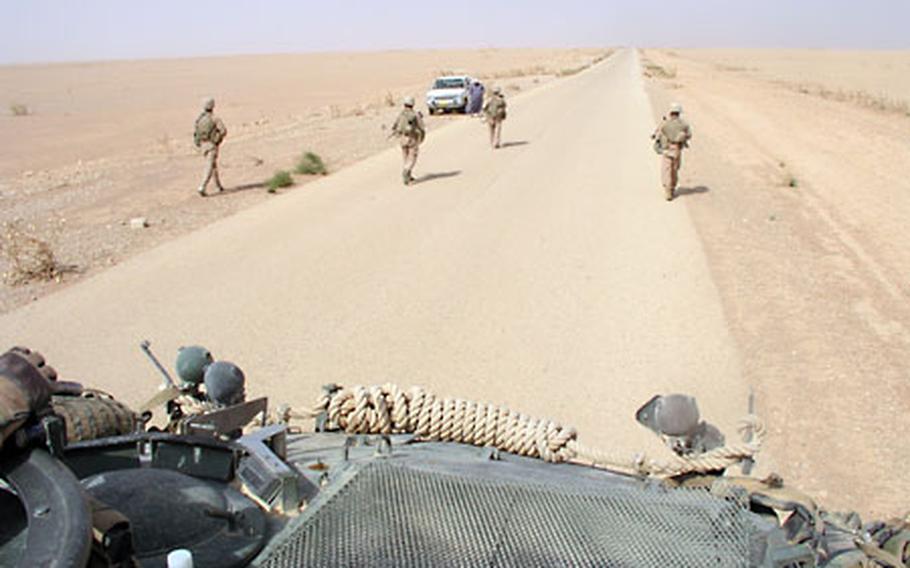 Marines approach a vehicle after flagging it to a stop during a hunt for suspected oil pirates. (Franklin Fisher / S&S)

Marines approach a vehicle after flagging it to a stop during a hunt for suspected oil pirates. (Franklin Fisher / S&S) 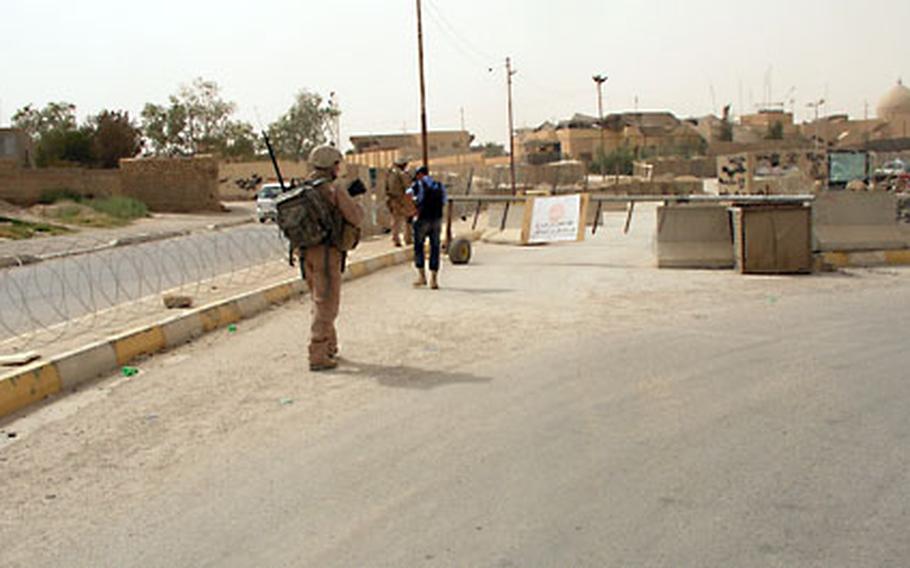 In Rawah, Iraq earlier this month, the driver of a white truck (left of photo) immediately pulled over when U.S. Marines waved him to a stop as they returned to their base from a patrol. Marines say most residents of their region are now so familiar with the military’s rules for vehicle movement that some motorists pull over and stop even without a signal from the Marines. (Franklin Fisher / S&S)

COMBAT OUTPOST RAWAH, Iraq &#8212; When a U.S. Marine foot patrol was heading back to its base recently in Iraq&#8217;s western Anbar province, the Marines noticed a white truck about two blocks off heading their way.

A Marine at the head of the patrol held up a hand and waved it side to side a few times, and the driver immediately pulled to the curb. Only when he saw the Marines had gone in behind the razor wire and protective barriers at their patrol base entrance did the driver restart his engine.

When driving in convoys, they sometimes wave flags to get other traffic to stop.

But not always, the Marines say.

Last month, task force Marines went through their escalating sequence of steps to get an oncoming vehicle to halt but, according to the task force, it kept coming.

Under the &#8220;escalation of force&#8221; rules, U.S. troops must follow when a vehicle gets too close, they are required to take a series of actions before firing. In the case last month, the Marines fired into the vehicle, wounding its three occupants, they said.

Some days later, Marine Maj. Hezekiah Barge Jr., the Task Force Highlander executive officer, took a patrol into Rawah to gauge the mood of the populace and sense the security situation firsthand. One resident brought up the incident and asked why the Marines had fired.

It was especially important, said Fankhauser, a scout team leader with Company C, 1st Light Armored Reconnaissance Battalion, because of the possibility of explosive-laden vehicles, including those driven by suicide bombers.

For Marines taking part in the counterinsurgency in Iraq, danger may lurk even when a vehicle is not moving.

Around 30 kilometers south of Al Qaim the morning of Aug. 2, one of the same battalion&#8217;s Marines was killed and three others wounded when they moved to investigate several oil trucks. Concealed gunmen appeared suddenly and fired on the Marines, who were members of the battalion&#8217;s Headquarters and Service Company.

But even in the desert, at least so far, say the Marines say, incidents like that of Aug. 2 are still the exception to the rule.