Anatomy of a raid: When a hot tip comes in, troops mobilize quickly 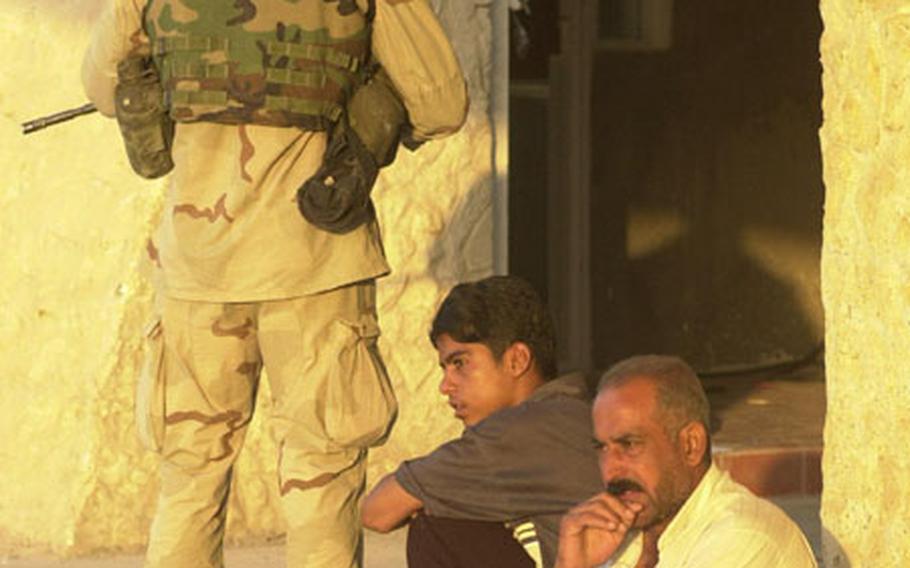 Spc. Shawn Re, right, Sgt. Clarence Skillin, left, and Pfc. Patrick Traphagan, back, counted bags of Iraqi money found in a raid last Wednesday at a mansion south of Baghdad. The raid turned up a few weapons, money and lots of clues, but not the No. 15 man on the U.S. most-wanted list. (Terry Boyd / S&S)

BAGHDAD, Iraq &#8212; Late in the afternoon, on a mission that began 72 hours earlier, Capt. Andrew Chenoweth stands a few blocks from a Baghdad apartment that may be the hiding spot of a significant target.

The pursuit of a former Baathist Party official turned terror financier began three days ago, after Chenoweth culled the tip from the mass of intelligence he gathered for the 2nd Battalion, 6th Infantry Regiment of the 1st Armored Division&#8217;s 2nd Brigade.

The chase brings Chenoweth here, following leads from a raid that began miles away at three neighboring locations in a rural area outside of Baghdad.

Now they wait on the street tantalizingly close to where the man may be and no one wants to leave empty-handed.

In Iraq, ordinary mechanized infantry troops are asked to do everything from collecting intelligence to catching people organizing and financing attacks against U.S. troops in what they call the &#8220;Three-Block War.&#8221;

Earlier in the week, Chenoweth had been relayed a tip that Maj. Gen. Rafi abd Al-Latif Tilfah al-Tikriti, former head of Iraq&#8217;s security apparatus and No. 15 on the United States&#8217; most wanted list, may be hiding along with two other Saddam loyalists in an area at the confluence of the Tigris and Diyala rivers.

At 2 a.m. Wednesday, a hunting party of 300-plus people gathered at Muleskinner Base on the southern edge of Baghdad. Six hours earlier, the 1st AD units involved &#8212; the 2-6 and 1st Battalion, 35th Armored Regiment &#8212; spent an hour rehearsing the raid in a soccer field. Company commanders and platoon leaders walked soldiers through an improvised layout of the area including the three target compounds.

Nothing is left to chance.

Pilots from the 2nd Armored Cavalry Regiment will sweep the river banks with their OH-58 Kiowa helicopters to make sure no one slips the net. Even an Abrams M1A1 tank will cover the raid, partly for its infrared capabilities, and partly because &#8220;nothing gets the Iraqis&#8217; attention like a tank,&#8221; says Capt. Jim Collins, an artillery support officer attached to the 2-6.

At the end of the rehearsal, the man leading the raid, Lt. Col. T.C. Williams, 2-6 battalion commander, reminds the soldiers to use appropriate, but not abusive, force.

At 2:55 a.m., Humvees full of soldiers start lining up behind Bradley fighting vehicles. At 3:19 a.m., the raid leaves Muleskinner, and 20 minutes later, Bradleys crash through the gates of three compounds, securing them by 4 a.m. The raid runs like clockwork. As the sun comes up, soldiers begin intensive searches of a futuristic mansion overlooking the Diyala, the shell of a nearby unfinished mansion, and a decaying compound of small buildings &#8212; most abandoned &#8212; appear to have been someone&#8217;s summer camp.

Guards watch about 50 Iraqis, most of whom are squatters on the properties.

While the opening moments are lightning fast, everything after the raid is painfully slow.

Chenoweth and other soldiers interview Iraqi after Iraqi at the three locations. Though the interrogations are subdued to the point of plodding, a trembling Iraqi tells one interrogator, &#8220;This is the worst day of my life.&#8221;

No one owns up to being a bad guy. It&#8217;s up to investigators to connect the dots.

It turns out neither the general nor the high-ranking Baathist who owns the mansion is in the net. The raid does snare a man who Williams and Chenoweth believe is a lieutenant colonel from Saddam&#8217;s army. There are a few weapons, including assault rifles and a grenade. All over the mansion, soldiers count bags of Iraqi dinar. Mostly, there are just more questions.

&#8220;We&#8217;ve already interrogated a whole village,&#8221; says one fatigued soldier fighting to stay awake 12 hours into the raid. During trips between compounds, Chenoweth even has a little boy volunteer information about Fedayeen hijacking cars. He gives the boy a handful of Tootsie-Roll Pops.

Somewhere along the line, a young man says he can show the soldiers where the mansion owner lives in Baghdad. So off to Baghdad Chenoweth and Williams go.

They decide not to take down the apartment, but it&#39;s clear someone will be back to visit.