Analysts: Talks between Kabul, Taliban hurt relations with US, others 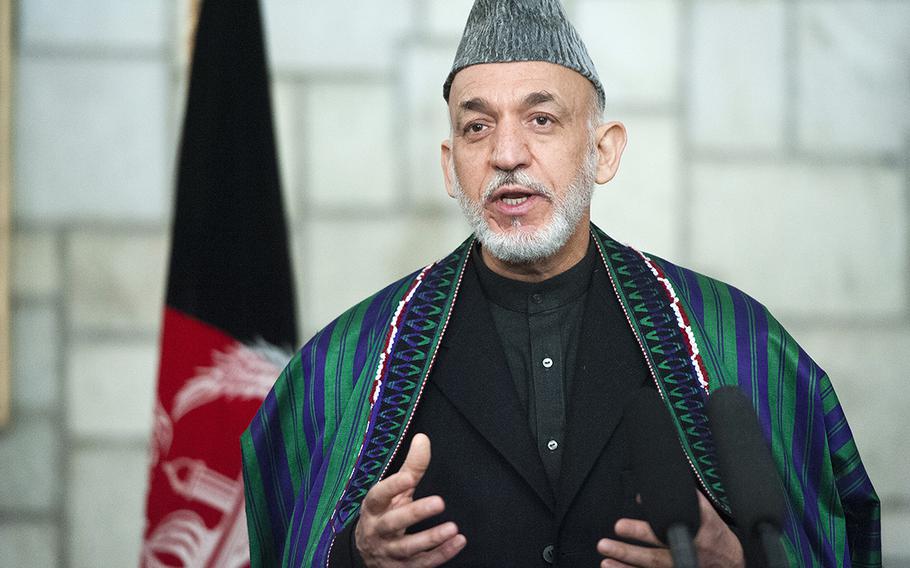 Afghan President Hamid Karzai speaks in Kabul on Dec. 13, 2012. Some analysts say that talks between Karzai officials and Taliban are hurting relations with allies. (Erin A. Kirk-Cuomo/Defense Department)

KABUL — Officials in Afghan President Hamid Karzai’s government have been holding secret talks with the Taliban over the past few months, according to media reports. But, analysts say, rather than furthering the peace process, those contacts have contributed to the souring of relations with Afghanistan’s international backers.

Last month, The Associated Press reported that at least two ministers in Karzai’s government traveled to the United Arab Emirates to meet with Taliban representatives. But a Taliban official told the news agency those talks went “nowhere.”

The New York Times reported Monday that Karzai’s backdoor contacts with the Taliban — which still have not borne fruit — may help explain policies and stances Karzai has taken that have frustrated the U.S., including his refusal to sign a bilateral security agreement that is to set the terms for a small training and advisory force to remain in Afghanistan after all combat troops withdraw at the end of this year.

Karzai’s standing in Washington has withered as the Afghan president has leveled accusations against the U.S. Last month, he suggested Washington was behind a deadly suicide attack on a Kabul restaurant claimed by the Taliban in which 21 people, including 13 foreigners — three of them Americans — were killed. More recently, his administration used misleading photos to accuse American troops of killing civilians. That has only poured salt in wounds opened by his refusal to sign the security agreement.

“He is playing with fire, because the mood in Washington and other capitals is increasingly frustrated,” said Michael Keating, a former United Nations deputy envoy to Afghanistan and now a senior consulting fellow with the London-based Chatham House. “You can explain why he’s doing it, but what he’s doing is potentially very damaging.”

That the Afghan government wants to talk to the Taliban is not what rankles Western leaders, said Graeme Smith, a senior analyst with the International Crisis Group.

“The Americans want the Afghan government to negotiate a peace deal,” Smith said. “The Americans really are urgently trying to reach a political solution.”

But the West is concerned that Karzai has unrealistic expectations that a peace deal could be reached with the Taliban that would make the bilateral security agreement with the U.S. unnecessary.

“Karzai wanting to negotiate is not what’s annoying Washington,” Smith said. “It’s the idea that a peace deal could be reached in time to make a BSA unnecessary.”

Karzai, in refusing to sign the agreement, has insisted that the United States should restart peace talks with the insurgents or withdraw all forces. American military officials are pushing for at least 10,000 troops to remain after the end of 2014 to provide training and other assistance. But without the bilateral agreement, all international forces may depart as NATO has said the U.S.-Afghan agreement is also key to it establishing a follow-on training force in Afghanistan.

The Taliban have continuously insisted that all U.S. and NATO forces — whom they regard as foreign occupiers — must leave the country before they consider participating in the political process. The insurgents have vowed to continue fighting if any foreign advisers remain in Afghanistan after the withdrawal of coalition combat troops.

It was Karzai himself who torpedoed peace talks set up by international diplomats last summer. The United States canceled preliminary talks in Qatar after Karzai objected to the Taliban’s new office there, which displayed the group’s white flag and featured signs referring to the “Islamic Emirate of Afghanistan,” the name the Taliban used when they ruled from Kabul.

Analysts say many of Karzai’s frustrations are understandable given his years of serving as president of a country with a massive international military and political presence.

“Karzai has been treated like the leader of a colonialized country for many years. So some of his frustration about the U.S. also can be explained, particularly when it comes to talking to the Taliban, through Qatar, where he has been excluded from the beginning while everyone had told him he was in the lead,” said Thomas Ruttig, co-director of the Kabul-based Afghanistan Analysts Network.

Having ruled Afghanistan since the United States and its Afghan allies toppled the Taliban in 2001, Karzai is barred from seeking a third term as president. Keating says the Afghan president is seeking to maintain his influence while defining his legacy.

“One of the reasons why Karzai has not signed the BSA is that he wants to remain very, very relevant until the end of his term,” Keating said. “He is trying to be known as the great patriot, rather than the guy who cut a deal with the foreigners, and open himself up to views that he favors foreigners over Afghans.”

Informal and formal contact with factions of the Taliban, or those claiming to represent the Taliban, have been going on for years without results, Ruttig said, and little indicates that will change soon.

“[Karzai] seems to hope that at least an opening of such a channel is realistic before he leaves office,” Ruttig said. “Of course, it is contradictory — the BSA and the Taliban demanding the withdrawal of all foreign soldiers. Maybe Karzai hopes he can persuade the Taliban [to accept] some presence in exchange for a part in running the country — unrealistic as this seems to be.”

The Taliban and related insurgent groups have many factions, and so far, none of the contacts that have been reported with the Afghan government have been the formal, authorized negotiations that would be needed for an actual peace deal, Keating observed.

“My instinct is that the Taliban do not really want to engage with an outgoing government, for all the obvious reasons,” he said. “There is nothing that I have read that adds up to a real process. What we’re talking about is conversations, some at high levels, but a peace deal requires a semi-structured process.”

Smith agreed that there are few signs that the Taliban will budge.

“If Karzai is holding up the BSA in hopes of a last-second breakthrough in talks with the insurgency, it’s not going to happen,” he said. “I can understand why he would want to try, because it’s necessary to try. But the reality is, the insurgents are optimistic as they watch tens of thousands of international troops leave.”

Smith noted that insurgent attacks increased in 2013 compared to the previous year, indicating the Taliban and other groups aren’t easing off. “This is not a war that shows any signs of cooling down.”