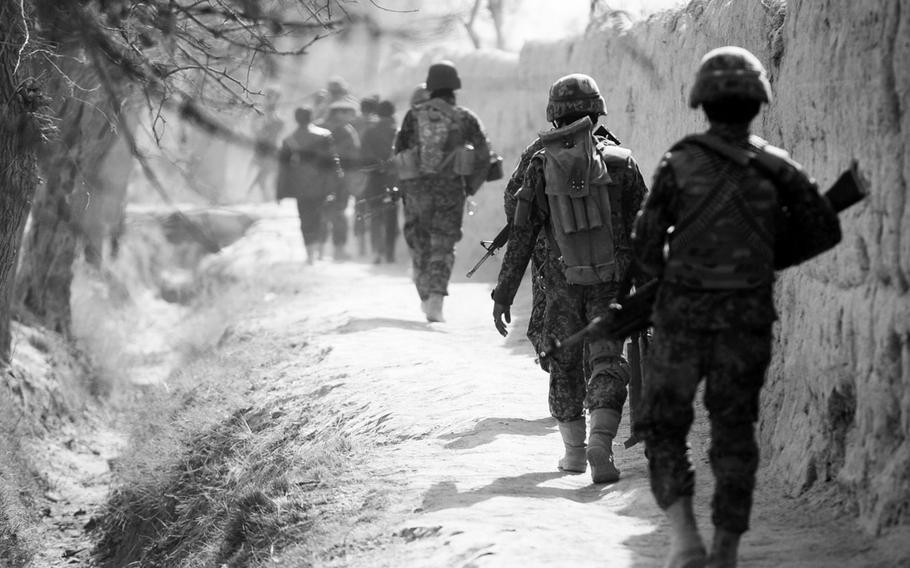 Afghan security forces patrol a village in Panjwai district, once known as part of the 'Birthplace of the Taliban.' (Josh Smith/Stars and Stripes)

A Taliban warning to the Islamic State group to stay out of Afghanistan indicates Afghan insurgents are taking their jihadi rivals seriously, seeing the group as a potential inspiration for fighters disillusioned with their leadership as they deal with new challenges after the withdrawal of most international troops, analysts say.

The warning came in an open letter by the Taliban No. 2, Mullah Akhtar Mansour, who said that the insurgents had achieved major gains in the 13-year war against the U.S. and its allies and that “jihad against the invaders” could not succeed “unless it is carried out by a single and united jihadi group, under one flag and one leadership.”

The letter also warned that the Taliban would respond “harshly” to anyone who tried to undermine those achievements.

The NATO command, the United Nations and other international organizations in Kabul all insist they have seen no evidence that the Islamic State is making significant inroads into Afghanistan or sending cadres from its heartland in Syria and Iraq, as it has done in Libya.

A Pentagon report to Congress released June 16 said U.S. forces had seen evidence of limited recruiting efforts, with a few individuals rebranding themselves as Islamic State to gain publicity, support and new members. “ISIL’s presence and influence in Afghanistan remains in the initial exploratory phase,” it said, using an acronym for the Islamic State group.

Taliban spokesman Zabihullah Mujahid said the purpose of the letter was to inform Islamic State that the people claiming to belong to the group in Afghanistan were actually rebranded members of criminal gangs whom the Taliban had always fought.

“There is no place for such people in Afghanistan … and Islamic State should know this,” Mujahid said in a telephone call.

Graeme Smith, senior analyst with the International Crisis Group in Kabul, said most of the self-styled Islamic State fighters were former members of the Pakistan Taliban and the Islamic Movement of Uzbekistan, a jihadist group formed in neighboring Uzbekistan, which now operates mainly in northern Afghanistan and Pakistan.

Even a modest Islamic State presence in Afghanistan, however, may be more than the Taliban can tolerate. Over the years, the Taliban have maintained an on-again, off-again alliance with other insurgent groups, such as the IMU and the Hezb-e-Islami of former Prime Minister Gulbuddin Hekmatyar, which operate in areas far from the Taliban southern heartland or which are well-established groups that would be difficult to confront.

But the Taliban may still be concerned that the Islamic State, whose reputation is riding high throughout the Islamic world after military successes in Syria and Iraq, could pose a greater long-term threat to their own position in Afghanistan. It would be better to confront the Islamic State now while its numbers are believed to be small in Afghanistan — a few hundred at most, compared with the Taliban’s estimated 30,000 fighters, according to analysts tracking both groups.

“The main threat to the Taliban from Islamic State is political and not military,” Smith said.

He said that if the Taliban leadership pursues peace negotiations with the Kabul government next year, as is widely expected here, “the Islamic State could provide a flag for the skeptics who want to continue fighting to rally under.”

There have been a number of reports in the past year of assassinations and skirmishes between the Taliban and the Islamic State group.

NATO officials said they, too, had seen reports of small-scale clashes between the two groups, likely the result of the Islamic State’s encroachment on Taliban territory and interference in their operations.

In general, the Islamic State is at a “huge” disadvantage in Afghanistan because their vision is internationalist, seeking to establish a transnational Muslim caliphate, Smith said. “In contrast, the (Islamic resistance movement) in Afghanistan has always been strictly nationalist — their aim is to capture Afghanistan, and they have no ambitions to spread further.”

Furthermore, the Islamic State’s radical Wahhabist philosophy was out of step with the more moderate Hanafi tradition to which most Afghans adhere, he said.

Still, the letter shows the Taliban are starting to take the Islamic State seriously, Smith said.

Afghan President Ashraf Ghani repeatedly has called for peace talks with the guerrillas, but the Taliban have refused to engage in formal negotiations until all foreign troops leave the country. For now, foreign troops are to stay through the end of 2016. However, there have been a number of informal meetings this year between Taliban representatives and members of Afghanistan’s civil society, including a delegation of female lawmakers earlier this month.

“It is difficult to imagine enthusiasm for (Islamic State) emerging among common Afghans,” said Borhan Osman of the Afghan Analysts Network. “However, tribal grievances towards the Taliban in communities which are not under government control could help (Islamic State) recruiters to strike a chord with these communities.”

“This is why (the Taliban) want to make sure whether these groups here that claim to be part of Islamic State are authentic or not, whether they are just using the name to garner support,” said Mohammad Hassan Haqyar, an Afghan political analyst and former official during the Taliban regime in the 1990s.

“Also, the Taliban want to tell Islamic State that they both fight for the imposition of Islamic Sharia law, so there isn’t any need for them here, since the Taliban are already dong that in Afghanistan,” he said.

Waheed Mujhda, a political analyst in Kabul, said there has been no evidence that the Islamic State has sent any recruiters or commanders from the Middle East to Afghanistan.

He said the Taliban letter may have been intended to show the governments of neighboring countries that they do not have to fear that the Taliban would allow the Islamic State to gain a strong foothold in Afghanistan. Neighboring Iran is supporting Shiite militias in Iraq fighting Islamic State militants, and Pakistan has its own war with insurgents along its western border with Afghanistan.

“Some countries in the region are strongly against Islamic State,” Mujhda said. “So the Taliban can potentially get support from those countries if they oppose it.”