Analysts: Taliban optimism may sink any direct peace talks with US 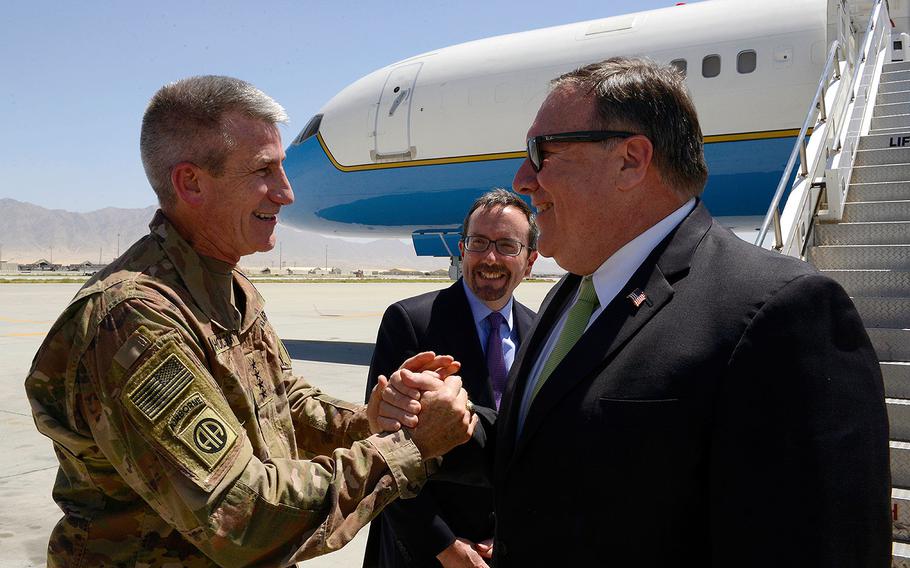 KABUL, Afghanistan —The Taliban may respond positively to new peace initiatives but are unlikely to make significant concessions when they feel they are winning the 17-year war, analysts said Tuesday following reports that the United States is open to direct talks with its enemy.

Both Washington and Kabul have urged the insurgents in recent months to accept renewed peace negotiations aimed at ending America’s longest war.

The Trump administration would consider direct talks with the Taliban, unnamed officials told The New York Times this week, in what would be a major shift in policy.

Washington insisted previously that the Kabul government would be in control of any peace negotiations with its battlefield enemies.

However, direct talks would be in keeping with President Donald Trump’s frequently stated goal of winding down American involvement in the war.

Kabul has offered peace talks with no conditions and a unilateral extension of last month’s Eid cease-fire, but it has not been able to bring the Taliban to the peace table.

The Taliban would have the initiative in any talks now, said Michael Kugelman, a South Asia specialist at the Woodrow Wilson International Center in Washington.

Ideally, U.S. and NATO troops would have been able to force the Taliban to talk peace, but Kugelman said the opposite is happening.

“The Taliban is performing well on the battlefield, remains very much on the offensive and would come to the negotiating table expecting to receive major concessions,” he said. “If it doesn’t get those concessions, it can happily return to fighting.”

Washington risks having to make major concessions — such as formally ceding to the Taliban the territory they now control — just to get them to negotiate, Kugelman said.

So far, the guerrillas have given no indication they are willing to compromise on their core demand that all foreign troops leave the country.

Most Afghans believe Afghan-led peace talks can end the war, but 64 percent blame the Kabul government for not having the will to bring about peace, according to a 2017 survey of Afghans by the Washington-based Center for Strategic and Regional Studies.

The recent cease-fires by Taliban and Kabul forces showed peace is possible, perhaps more now than ever, said David Sedney, a career diplomat who served at the U.S. embassy in Kabul after 9/11.

“Both the (Kabul) government and the Taliban are under pressure to end the war,” Sedney said. “Whether the Taliban responds to U.S. overtures is still not clear, but I think the odds are higher now than they ever have been.”

In any negotiations, the Taliban would encourage the U.S. to withdraw its troops in exchange for a Taliban pledge not to allow al-Qaida and other international terrorist groups to operate on the Afghan soil, said Ahmad Majidyar, a researcher at the Middle East Institute in Washington.

“Unlike Afghan and American officials, Taliban leaders are still confident about a military victory,” he said. “The Taliban will most likely interpret the shift in U.S. strategy more as a sign of desperation than a gesture of goodwill.”

During the 2009-12 surge of U.S. and NATO forces — when the coalition peaked at about 100,000 U.S. and 40,000 additional allied troops — the Taliban were pushed out of large stretches of southern and eastern Afghanistan, and the influx of U.S. resources accelerated the growth of the Afghan army and police.

But since then the Taliban, though outnumbered and outgunned by security forces, have mounted a comeback and now control more territory than at any time since they were forced from power in 2001.

“The Taliban would inevitably play a role in the Afghan political process,” Sedney said.

Sedney added that most Afghans oppose the Taliban, and he doesn’t see the militants coming into power as they did in the 1990s, though individual leaders would probably win elections.

Anthony Cumpian, a former specialist who received a Purple Heart after getting shot in his left arm in Paktia province in 2012, said he welcomes the prospect of peace talks. Cumpian, of San Antonio, said that the war has to end at some point, even if the Taliban retains influence.

“I don’t think the Taliban having a legit voice in the government would be a good testament to all the Western blood spilled over there, but I also know everyone thinks they are the good guys,” Cumpian said. “I don’t think anything about that place is black and white.”