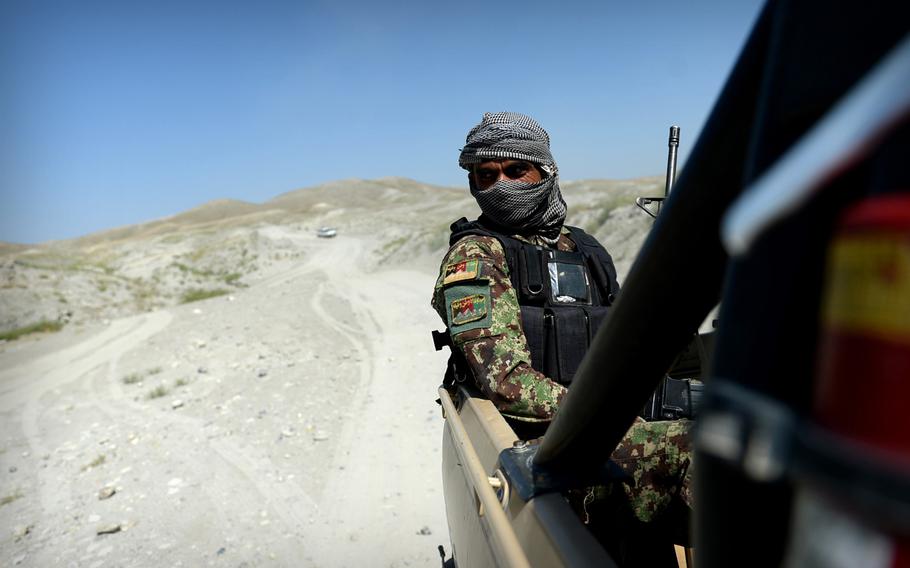 Buy Photo
An Afghan army soldier rides in the back of a pickup truck during a convoy mission in Nangarhar province. Nangarhar is the center of the fight against the Islamic State presence, which is benefiting from rifts inside the Taliban. (Josh Smith/Stars and Stripes)

Buy Photo
An Afghan army soldier rides in the back of a pickup truck during a convoy mission in Nangarhar province. Nangarhar is the center of the fight against the Islamic State presence, which is benefiting from rifts inside the Taliban. (Josh Smith/Stars and Stripes) 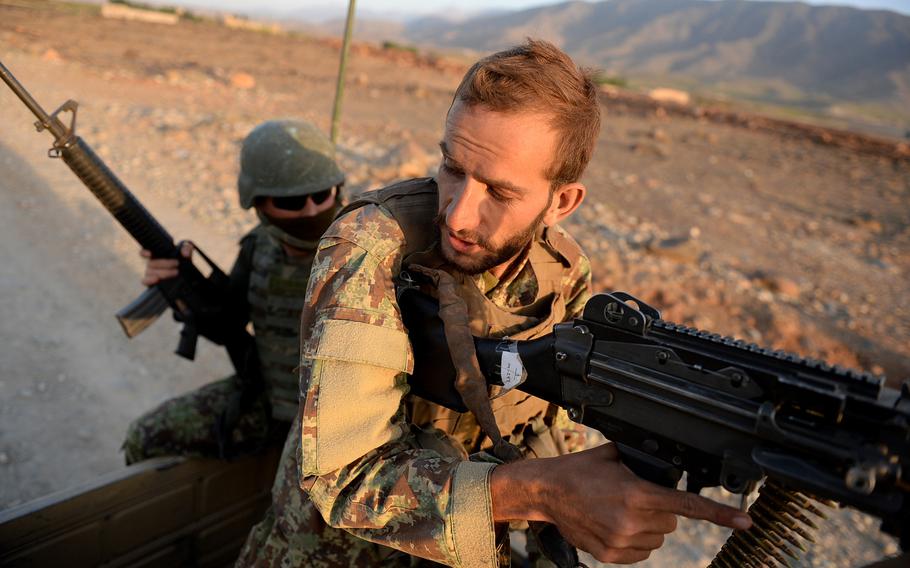 Buy Photo
Afghan army soldiers man their guns during a mission in Nangarhar province in eastern Afghanistan. The already volatile situation in the province has been exacerbated by the emergence of more-radical groups, such as the Islamic State, which oppose the mainstream Taliban. (Josh Smith/Stars and Stripes) 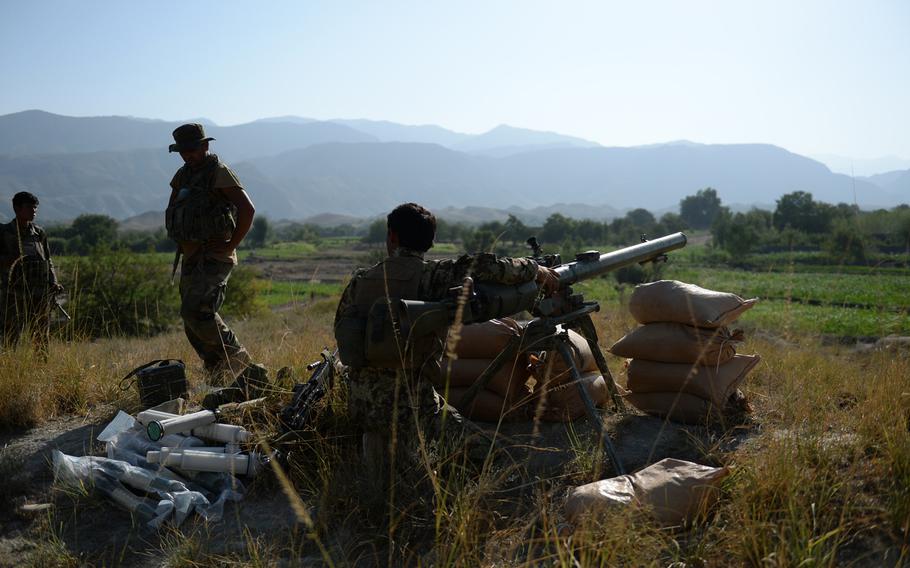 Buy Photo
Afghan soldiers set up a recoilless rifle as they prepare to assault a Taliban compound in Nangarhar province. The fiight against an entrenched insurgency has been complicated by fractures within the Taliban that have provided openings for new groups such as Islamic State. (Josh Smith/Stars and Stripes) 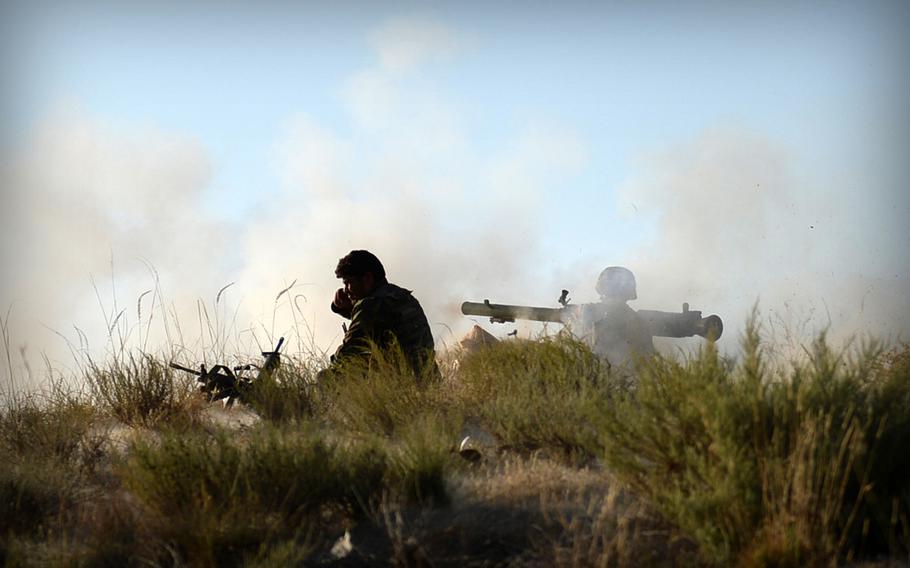 Buy Photo
Afghan army soldiers fire a recoilless rifle during an operation to clear a Taliban compound in eastern Afghanistan. Security forces are facing off against an increasingly diverse array of insurgent groups that have become disaffected with the Taliban. (Josh Smith/Stars and Stripes)

NANGARHAR PROVINCE, Afghanistan — After initially dismissing the Islamic State threat in Afghanistan, Western military officials and private analysts are increasingly concerned that a leadership struggle within the Taliban as well as dissent over peace talks will drive more fighters into ranks of the foreign-led extremist group.

The lawless border regions between Afghanistan and Pakistan have long been a haven for insurgents, and as tensions within the Taliban have increased, the Islamic State group — also known as ISIL, ISIS and Daesh — is just one of an “alphabet soup” of militant groups that have sought to take advantage of fracturing within the Taliban to establish footholds, said Graeme Smith, a Kabul-based senior researcher for the International Crisis Group.

Smith compared the Islamic State in Afghanistan to a skin blemish. “In some ways it’s like worrying about a mole: It’s a tiny speck, but could it give you cancer? You don’t know. Right now Daesh is a tiny phenomenon, but there may be a broader constituency of insurgents that may disagree with any political compromise, and we just don’t know how deep those feelings run.”

Insurgent-on-insurgent violence has more than tripled in the past two years, according to several confidential databases maintained by Western intelligence organizations, with such clashes occurring in more than half of Afghanistan’s 34 provinces. “The fighting among insurgents used to be mostly just about old grudges, but now it’s political disagreements over what should happen in Afghanistan,” Smith said.

Just as the Taliban itself rose from the ashes of a fractured Afghanistan, analysts fear that new groups could emerge to add to the violence in the region, and make striking political deals to end the fighting impossible for the government and its Western backers.

“A particularly challenging development would be if an entity aligned with a foreign extremist group like (Islamic State), unfriendly to Islamabad, as well as Washington and Kabul, emerged to fill the void,” Barbara Elias, an assistant professor at Bowdoin College, wrote in a recent analysis for Foreign Affairs.

Some militants have accused the mainstream Taliban of being soft for flirting with peace talks with the Afghan government. Others have split from the group after it was revealed this summer that the Taliban’s founder and longtime leader Mullah Mohammed Omar died several years ago, a fact covered up by the leadership. Some members of disaffected tribes have left the Taliban to join groups like the Islamic State; in some cases, they’ve even joined local pro-government militias.

“Outside of Nangarhar, it’s fair to describe other reports of insurgents as self-declared, with unclear links to Daesh,” Smith said. “Even in the north, it’s not clear whether any of their love letters to al-Baghdadi are being answered.”

Recruiters acting in the name of Islamic State made little progress after they first appeared in the region last year, NATO officials said. But in 2015, a group of militants who had mostly split from Tehrik-i-Taliban Pakistan, or TTP, was recognized by al-Baghdadi, and money reportedly started to arrive from foreign sources.

Islamic State forces picked fights with local Taliban, and are reported to exert majority control in at least three districts in Nangarhar.

What is known about the makeup of the current Islamic State forces in Afghanistan and Pakistan seems to confirm that the group is feeding off divisions in other militant organizations.

“Almost all Daesh fighters are former Taliban,” said Dawlat Waziri, a Defense Ministry official. “Many changed sides because they were unhappy with the Taliban.” Even foreign fighters from places like Uzbekistan, China, Pakistan and Chechnya already had ties to the Taliban, he said.

Mohammad Hassan Haqyar, a political analyst in Kabul who keeps a close eye on the insurgency in Afghanistan, said that Islamic State is definitely benefiting from the Taliban infighting.

“If the Taliban do not unite and become one very soon, Daesh will gain many supporters in Afghanistan,” said Haqyar, founder and chief editor of the Huryat news magazine. “Many Taliban fighters could become frustrated and will join Daesh.”

While many of the current fighters linked to the Islamic State appear to have connections to the Taliban, a truly large-scale shift will require more than flying a black flag, as the two groups have differences in ideology and vision for the country, analysts caution.

“Daesh does not care much about political power in Afghanistan, but rather they want to use Afghanistan as a strategic route to the whole region,” Haqyar said.

In Nangarhar, many of the Islamic State leaders come from Pakistan, but most lower-level fighters are former local Taliban, said one tribal elder who asked not to be named because he lives in an area under Islamic State influence.

“The leadership is not Afghan, so people here live in great fear,” he said in a phone interview. “Their behavior with the locals is very bad. That is why people are unhappy that the government or the Taliban have not eliminated them.”

Islamic State fighters have imposed strict restrictions on women, closed a number of schools, and threatened death to anyone caught helping the government, the elder said.

As recently as April, a Pentagon spokesman, Col. Steve Warren, said that despite reports of an Islamic State presence, “we don’t necessarily believe that…the conditions in Afghanistan are such that ISIL would be welcome there.”

However, conflict among insurgent groups have now heightened U.S. and NATO concern.

NATO’s top military commander, Gen. Philip Breedlove, told reporters during a recent visit to Kabul that he was surprised to learn that groups claiming allegiance to Islamic State are active in many provinces.

“This is something that we probably know less than about than we need to, and we’ll just get smarter over time,” he said, according to a transcript of his remarks.

On the ground in Nangarhar, some Afghan soldiers say the group’s emergence has meant little for them, partly because of the American willingness to use force against Islamic State targets.

Several American drone strikes in Nangarhar and Helmand provinces over the summer reportedly killed some of the Islamic State’s top local leaders and dozens of fighters.

“We had more of a problem earlier this year, but then the American drones came, and we have seen fewer Daesh,” said Brig. Gen. Mohammad Nasim Sangin. “The Americans want to fight those terrorists.”

Zubair Babakarkhail and Hamidullah contributed to this report.