Analysts: Taliban attacks aim to strengthen position ahead of talks 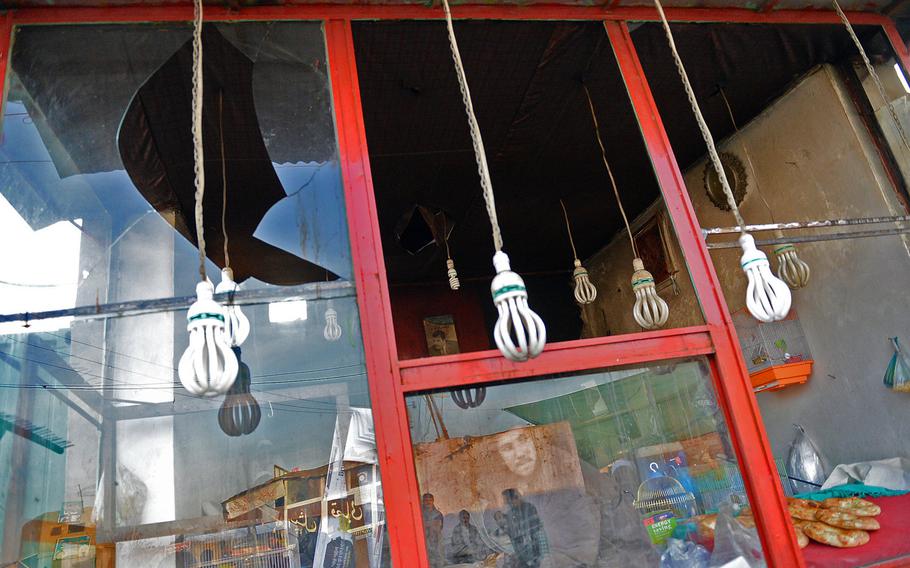 Broken windows at a bakery near the scene of a suicide car bomb attack in Kabul, Afghanistan, on Monday, Jan. 4, 2016. it was one of four that hit the capital in just over a week. There has been a surge of violence in the country since Afghan President Ashraf Ghani announced a new effort to start peace talks with insurgent groups. (Heath Druzin/Stars and Stripes)

KABUL, Afghanistan — The spate of insurgent attacks across Afghanistan in recent days could indicate that the Taliban are seeking to shore up gains ahead of a new government initiative to launch talks to end the 14-year-old war, experts say.

In doing so, analysts say, the Taliban are acting more like a conventional army than an insurgent group, shifting toward year-round warfare from their typical spring-summer fighting season.

The surge in violence comes ahead of a four-nation meeting to develop a framework for peace negotiations between the Afghan government and insurgents, part of President Ashraf Ghani’s effort to negotiate a political settlement.

Ghani is in a tough spot but knows negotiations are the only way forward, said a Western official knowledgeable about Afghan politics, who requested anonymity to speak frankly about sensitive political matters.

“This spate of attacks seems related to the political calendar, but it’s unclear whether the insurgents are trying to prevent talks or simply raise the price of their participation in future negotiations,” the official said. “Every explosion makes it harder for President Ghani to forge ahead with negotiations because he faces criticism at home for seeking political solutions.”

Kabul has seen four suicide car bomb attacks since Dec. 28, including three on the same heavily defended road near the international airport and a large foreign military base. One of those attacks hit the convoy of a German general, who was uninjured, according to German army spokesman Lt. Col. Mario Carlsson. Another attack was against an upscale French restaurant popular with foreigners and Afghan elites.

In the northern city of Mazar-e-Sharif on Sunday, insurgents laid siege to the Indian consulate, a battle that lasted more than 24 hours.

All of this comes as Afghan forces and the Taliban fight a pitched battle for Helmand province that has caused fears that the insurgent group could topple a province for the first time since the U.S. invaded to oust the Taliban from power in 2001. U.S. special operations troops have been aiding Afghan forces in Helmand. On Tuesday, one was killed and two injured, officials said.

Military analyst and retired Afghan Army Gen. Atiqullah Amarkhail said the Taliban ratchet up the violence any time there’s talk of peace. That puts government forces in a position where they desperately need to make headway against the Taliban ahead of negotiations.

With the recent wave of attacks, the Taliban’s new leader, Mullah Akhtar Mansoor, may be trying to unite an increasingly fractured group behind him. That could be a pressing concern in light of reports last month that he had been injured or killed in a shootout. To counter such speculation, the Taliban released an audio recording purportedly capturing Mansoor speaking and denying that there was such an incident.

“Mansoor wants to consolidate power, and showing he can keep up attacks helps that,” said Sami Yousafzai, a Newsweek correspondent who has worked for years in Pakistan and is an expert on the Taliban.

Another factor may be that the Taliban are seeking to distance themselves from Pakistani security services, on whose behalf they’re often accused of acting. The first of the four Kabul attacks, on Dec. 28, occurred the day after Pakistan’s army chief met with Ghani.

“The Taliban wants to show that they are independent by carrying out those attacks,” Amarkhail said.

In the past, violence across the country would plummet in cold-weather months as Taliban fighters headed for safe heavens in Pakistan ahead of winter snows. This provided a respite for the Afghan security forces, who struggle with logistics and have greater challenges in keeping troops supplied in cold weather. Now, however, many Taliban fighters are staying in Afghanistan throughout the year.

“It already has raised a lot of concerns about the Afghan forces’ ability to fight on so many fronts,” said Borhan Osman, a researcher with the Kabul-based Afghanistan Analysts Network. “They are already overstretched.”

That’s partly due to the pullback of international forces from a combat to primarily advisory role and the concurrent decrease in U.S. “kill-and-capture” operations, nighttime raids that netted many Taliban commanders. The drop in such operations has relieved pressure on the Taliban.

At the end of 2014 the international military coalition in Afghanistan withdrew most of its forces, shrinking to about 13,000 troops focused on training and advising Afghan forces.

A more disconcerting reason for the uptick in violence is that the Taliban are confident enough to act more like a conventional army rather than relying on guerrilla tactics that have defined much of the war, Osman said. Fighters now mass to take territory they feel they can defend and are less willing to cede those gains over winter.

“After the drawdown of the international forces, the fighting has shifted from a hit-and-run approach to a more conventional warfare where there are sort of established lines of territory control,” he said. “It is essential for the Taliban to keep an active presence in order to hold a territory it has captured.”

Civilians make up the vast majority of those killed and injured in the Kabul attacks, as they have in the larger war. Some are growing impatient with the government.

In Kabul’s Khwaja Rawash neighborhood near the road that suffered three of the most recent blasts, shaken residents said they were losing faith in the ability of the security forces to protect them.

“In one week it’s the third (bomb) and people are asking how they could do it three times on this important street?” said Abdul Baqi, whose bakery windows were shattered by one blast. “After the first blast, they should have tightened the security.”

Nearby, Sadat Khan, whose grocery store was damaged by one attack, said his children were afraid to go outside now.

“People are really scared,” he said. “People are getting sick of being traumatized.”

Zubair Babakarkhail in Kabul and Marcus Kloeckner in Germany contributed to this report.