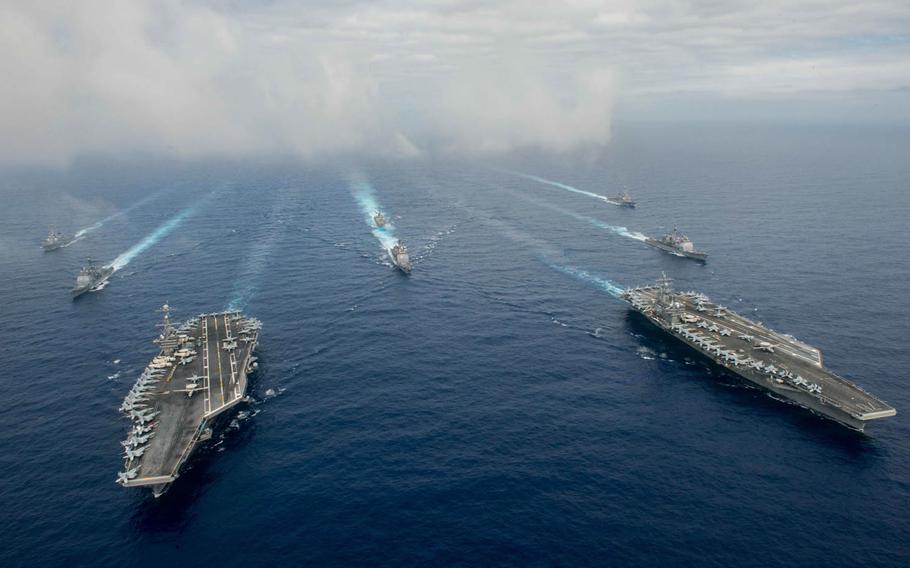 Despite the challenges, the Navy should double the number of American aircraft carrier strike groups operating in the Western Pacific, in part to counter China’s aggressive expansionism, analysts say.

Forward-stationing another carrier west of the international dateline was recommended in a Defense Department-commissioned report, “Asia Pacific Rebalance 2025: Capabilities, Presence and Partnerships,” published this year by the Center for Strategic and International Studies.

“A larger demonstration of U.S. will and capability is necessary for deterrence and reassurance purposes,” said the report, which added the Navy should examine the steps needed to move a second carrier strike group to the Far East. One possible location would be Yokosuka Naval Base in Japan.

“There is a unique political opportunity to shift a carrier forward in 2019 because the U.S. fleet is scheduled to add the USS Gerald R. Ford, which will deploy to California and would therefore permit movement of an older carrier forward without decrementing home-ported U.S. carriers,” the report said.

Tetsuo Kotani, a research fellow at the Japan Institute of International Affairs, addressed issues — particularly logistical and political concerns — that would be at play if a second U.S. carrier were brought to Japan. For example, there’s a lack of airport capacity in Japan to accommodate planes from a second carrier, he said during a lecture Tuesday just outside Yokosuka, headquarters of the U.S. 7th Fleet.

The Philippines recently signed a new basing agreement with the U.S., but it doesn’t allow for permanent stationing of U.S. forces there. Australia lacks the maintenance facilities required by a carrier strike group. Guam’s infrastructure is outdated and would require massive investment to accommodate a carrier, Kotani said.

“That doesn’t mean the U.S. can’t maintain a two-carrier posture in the Western Pacific,” he said.

In June, the San Diego-based USS John C. Stennis and Yokosuka-based USS Ronald Reagan conducted dual-carrier flight operations in the Philippine Sea — the first time in two years that such an operation has taken place.

U.S. officials announced earlier this year that the Navy’s 3rd Fleet, which oversees ships based in San Diego, Washington state and Hawaii, would send more ships to operate alongside the 7th Fleet.

The 3rd Fleet, which controls the Stennis, USS Theodore Roosevelt, USS Carl Vinson and USS Nimitz, has the capacity to station one of its carriers in the Far East at all times, Kotani said.

“If the U.S. can come up with a more effective rotation of carriers in the Pacific it would be possible,” he said. “The 3rd Fleet can become a force provider for 7th Fleet, who can be a force user.”

A two-carrier posture would send a strong signal to China about U.S. determination to maintain peace and security in the region — most notably the South China Sea where China has been building and militarizing artificial islands – but it wouldn’t be a reaction to China’s efforts to build its own aircraft carriers. China’s first aircraft carrier, the Liaoning, is limited, Kotani said.

“It is not a carrier at this moment,” he said. “It is just a big transport ship.”

Carriers belonging to the 3rd Fleet carriers have deployed to the Far East in the past and will likely do so again, Lt. Clint Ramsden, Navy spokesman for the U.S. Pacific Fleet, said Friday.

The U.S. is rebalancing its naval forces to station 60 percent of the fleet in the Pacific. People can expect to see the 3rd Fleet play a larger role in places that have, traditionally, been 7th Fleet areas, he said.

“There are plans in place for 3rd Fleet forward using the 3rd Fleet staff to control deploying ships from the West Coast of the U.S. into what has traditionally been the 7th Fleet’s area of responsibility all the way from the international dateline to the Indian Ocean,” Ramsden said.