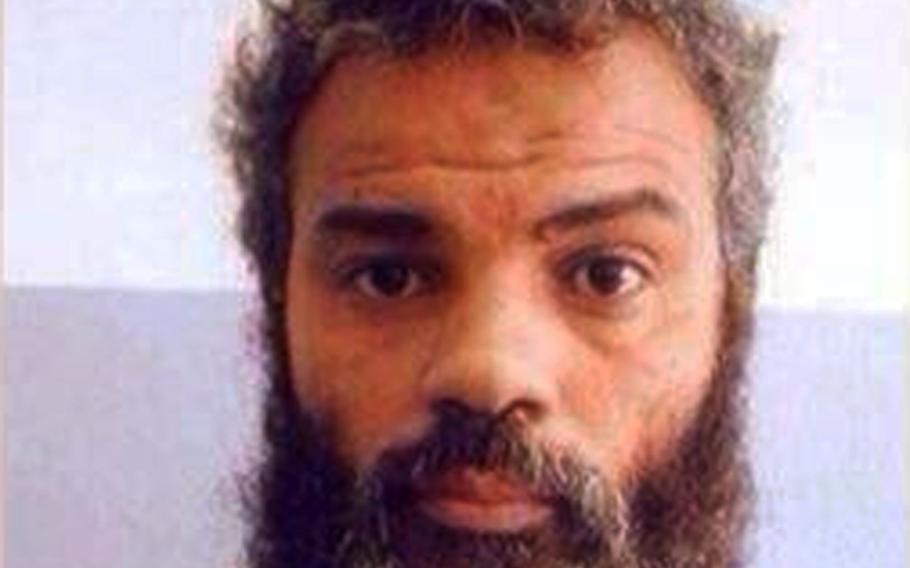 This undated image obtained from Facebook shows Ahmed Abu Khattala, an alleged leader of the deadly 2012 attacks on Americans in Benghazi, Libya, who was captured by U.S. special forces on Sunday, June 15, 2014, on the outskirts of Benghazi. (Facebook)

NAPLES, Italy — After the capture of a suspected planner of the 2012 attack against a U.S. diplomatic facility in Benghazi, Libya, the Obama administration is expected to follow a legal course charted in two recent apprehensions of alleged terrorists in Africa: interrogate at sea and then prosecute.

Ahmed Abu Khattala, the 43-year-old Libyan suspected of planning the attack that killed Ambassador Chris Stevens and three others, is now being held aboard a ship in the Mediterranean Sea after his capture by Special Operations forces and FBI agents, defense officials said.

His detention marks the third time since 2011 that a suspected terrorist captured by the U.S. military has been held at sea. It continues a practice that the Obama administration regards as the best alternative to placing him in the U.S. detention facility in Guantanamo Bay, Cuba, or keeping him in another country, analysts say.

“There’s now an established game plan for handling these kinds of apprehensions,” said Peter S. Margulies, a professor at Roger Williams University School of Law. “It usually involves a temporary period of time aboard a Navy vessel for periods of interrogation, followed by an arraignment in a civilian court.”

U.S. attorneys unsealed a one-page indictment of Khattala on Tuesday charging him with three counts, including killing a person during an attack on a federal facility and providing material support to a terrorist organization.

If convicted of the lead count, Khattala would be eligible for the death penalty.

His capture resembles the apprehension of two other suspected terrorists in Africa. Nazih Abdul-Hamed al-Ruqai, also known as Abu Anas al-Libi, was spirited to the amphibious transport dock USS San Antonio in the Mediterranean Sea immediately after Special Operations forces and the FBI abducted him in Libya in 2013. He was held for seven days of interrogation aboard the ship before being placed in a cell in New York.

Suspected al-Shabab figure Ahmed Abdulkadir Warsame, captured aboard a fishing vessel in the Gulf of Aden off Somalia in 2011, was held for more than two months aboard the amphibious assault ship USS Boxer while he was interrogated.

James Stavridis, NATO’s former supreme commander and currently dean of the Fletcher School of Law and Diplomacy at Tufts University, said Khattala will be isolated from the crew aboard the ship and watched around the clock. He’ll likely be interrogated by a “fly-away team” of Defense Department, Justice Department and CIA officials, after which he would be flown to the U.S., probably on a military aircraft out of a base in Europe.

U.S. officials stress he will be taken quickly to the U.S. for detention. Defense officials say he was “en route” to the U.S. and that transit would be a matter of “days and weeks” as opposed to “weeks and months.”

That difference is a significant one, legal experts say. In a criminal case, a suspect must be notified of his rights and given access to a lawyer immediately after being detained. But in cases involving terrorism, the intelligence a suspect might have is often valued more than the facts of the case against him, creating an incentive for interrogations.

The “two-step” process of interrogating and prosecuting is a hybrid of the two systems, according to John B. Bellinger III, a lawyer with the firm Arnold & Porter in Washington, DC, and an adjunct senior fellow at the Council on Foreign Relations.

“They’ve been trying to straddle these two legal structures, of both treating them as combatants under the laws of war for initial detention and questioning and then treating them as suspects in a civilian court,” he said.

The system is still imperfect. The Geneva Conventions, which dictate the care of combatants captured in war, state that prisoners of war cannot be held aboard a ship. That rule, according to Margulies, related more to the dangers of submarines at a time of war and hasn’t been widely questioned in recent years.

But U.S. attorneys have had to answer for the lengthy pre-Miranda interrogations. In the Warsame case, they claimed a public safety exception allowed them to interrogate the suspect at length before giving him access to a lawyer.

The “Quarles” exception, named for the case that established the rule, allows police in rare instances to question suspects before reading them their rights, when someone’s safety is at risk. Those cases typically involve asking about an accomplice or something urgently related to the crime scene.

If Khattala is transferred quickly to a federal court, it may point to his distant relationship to the battlefield under U.S. law, which defines al-Qaida as the enemy. Khattala was commander of the Benghazi branch of Ansar al-Shariah, a militia designated a terrorist organization by the U.S. but that the State Department has said is not an affiliate of al-Qaida.

“One, it may be harder to justify holding him as a combatant under the Articles of War,” Bellinger said. “And two, they may believe there’s less intelligence to collect from him.”

Stars and Stripes reporters Slobodan Lekic and Jon Harper contributed to this report.