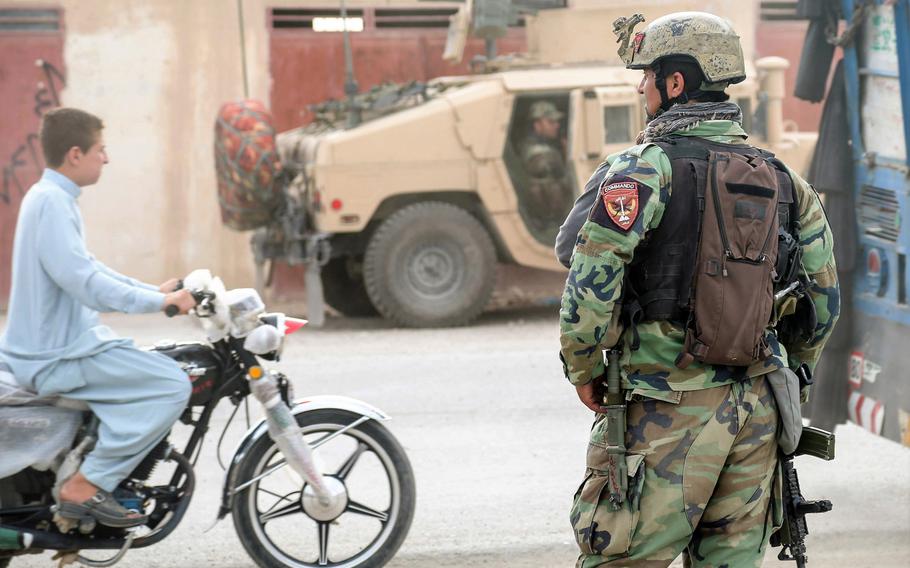 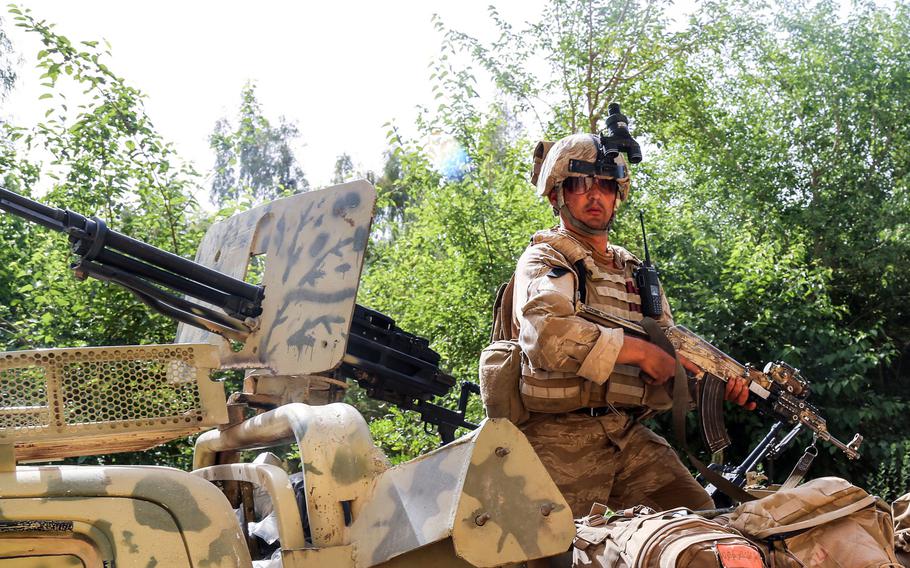 Afghan commandos from the 4th and 9th Special Operations Kandaks prepare to patrol Farah city streets after a failed Taliban assault on the city May 15, 2018. (John Conroy/U.S. Army) 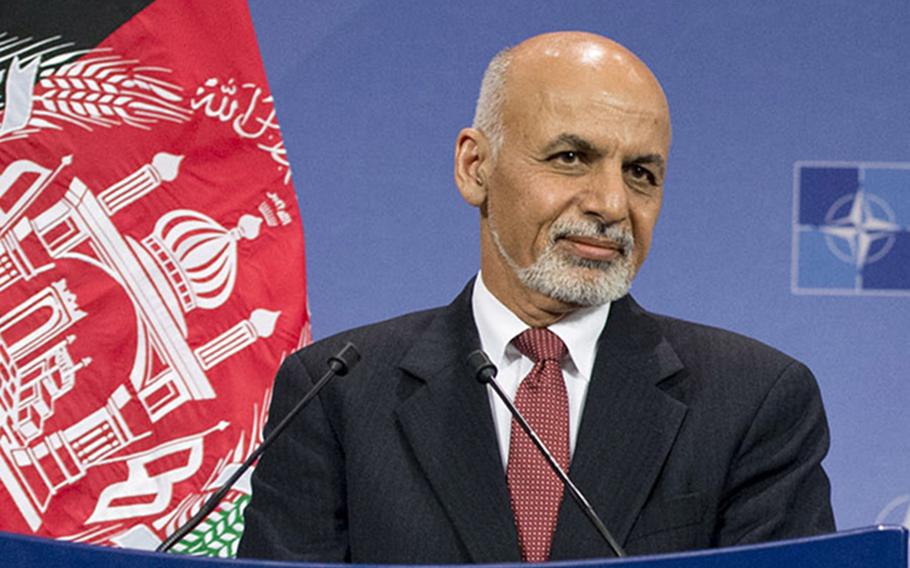 Afghan President Ashraf Ghani at a news conference at NATO headquarters in 2014. Ghani announced a cease-fire with the Taliban beginning June 12, 2018. (NATO)

The Afghan government’s unilateral cease-fire with the Taliban is a gamble aimed to split the Taliban and put Kabul – not Washington – in control of the peace process, experts and officials said following the announcement.

Part of Kabul’s strategy is to find bands of Taliban agreeable to cease-fires and eventually peace deals with the government, Hamdullah Mohib, Afghan ambassador to the United States, said Thursday.

“We must focus on those reconcilable Afghan elements of the Taliban who have legitimate grievances,” Mohib said. “This is our target audience for a peace deal.”

Under the cease-fire, U.S. forces and Afghan security forces will unilaterally halt operations against the Taliban beginning on Tuesday and ending on June 20, Ghani and the U.S. military said.

Small concessions like this cease-fire can build trust for larger negotiations such as peace talks, David Sedney, a career diplomat who served at the U.S. embassy in Kabul after 9/11, told Stars and Stripes.

“Ghani’s bold move, at a time when the Afghan people are calling for an end to war, has put the onus square on the Taliban to respond,” Sedney said in an email. “If the Taliban do reciprocate in kind (not just in words) we could see the beginning of the first real Afghan peace talks since the Taliban emerged over 20 years ago.”

The current cease-fire comes during the Taliban’s spring fighting season, with militants controlling or contesting more than 40 percent of the country.

Ghani made his gesture without a promise by the Taliban that they would reciprocate. A spokesman from the group said the Taliban leadership is currently discussing its options.

The risk, analysts say, is that a week’s respite could allow the Taliban to regroup, and any attacks during the cease-fire could hurt Ghani politically.

“Cease-fires generally are fragile and vulnerable,” said Laurel Miller, former acting special representative for Afghanistan and Pakistan. “A cease-fire that was not negotiated, but declared by one side especially creates opportunities for spoilers.”

Kabul’s strategy Kabul is too weak to take on the various Taliban, Islamic State and al-Qaida anti-government groups at the same time on its own, but the government may be able to split the insurgency into more manageable components, said Kamran Bokhari, senior fellow with the Center for Global Policy in Washington.

The Taliban today comprises mostly warlords and autonomous crime bosses affiliated with the insurgents, Bokhari said in an email. These factions have often fought in the past, and it’s unclear how much command the Taliban leadership in Quetta, Pakistan, have over them.

A model for a peace deal for one faction, as opposed to the entire insurgency, is the reconciliation and amnesty deal signed in 2016 with Hezb-e-Islami, Afghanistan’s second-largest insurgent group, Bokhari said.

Another might be the government’s co-opting of a Taliban faction led by Mullah Mohammad Rasul, Bokhari said.

The Rasul group last year accepted cash and intelligence in their fight against other Taliban in western Afghanistan, according to a The New York Times report.

The problem in dividing the Taliban is that it requires time the Afghan government may not have, Bokhari said. A contentious 2014 national election almost led to ethnic civil war, and the Taliban may not want to negotiate with a government that could fall apart during elections next year.

“One can see that the Afghan jihadist movement has the relative upper hand in the battlespace, and thus the Afghan state is pursuing negotiations from a position of relative weakness,” Bokhari said. “From the point of view of the Taliban, the movement (has) very little incentive to talk to Kabul and prefers to negotiate with Washington.

“Therefore, the Taliban are unlikely to take this week-long cease-fire seriously.”

Obstacles to peace Negotiations with the Taliban would not be a surrender, experts said.

However, any direct talks between the Taliban and the Kabul government, in a scenario in which the two sides are roughly equal, is likely to result in agreements the U.S. may not like.

The Taliban’s most important demand would be the withdrawal of international troops, said Rahmatullah Amiri, a Kabul-based researcher on the Taliban and a survivor of the brutal insurgent raid on the American University of Afghanistan in 2016. This would throw a wrench in any U.S. plans to maintain a presence in the region to fight terrorism.

If they were to agree to peace talks, the Taliban would be willing to compromise on human rights issues and the education of women, which they already allow in some of the provinces they control, Amiri said.

The cease-fire is the second concession since Ghani offered the Taliban recognition in February as a legitimate political group if they agreed to talks.

In response, the Taliban said it would negotiate only with the Americans, not the Kabul government, which it described as a puppet of the West.

Ghani’s cease-fire, however, was a small declaration of independence from the U.S., Sedney said. While Ghani would have not made the announcement without consulting his allies, the announcement positions Kabul as strategically in the lead – not Washington.

“A unilateral cease-fire was not part of the existing U.S. South Asia strategy,” said Sedney, now at the Washington-based Center for Strategic and International Studies.

In the long term, none of Afghanistan’s neighbors want a stable U.S. ally in their backyard, Barnett Rubin, a leading scholar on Afghanistan who helped open the secret negotiations with the Taliban that ended in 2015.

“While none of those countries want the Taliban to take power, stabilizing Afghanistan as it exists now is stabilizing an American military base in the heart of the region, and they see that as much of a threat to them as Al Qaeda or ISIS,” Rubin said.