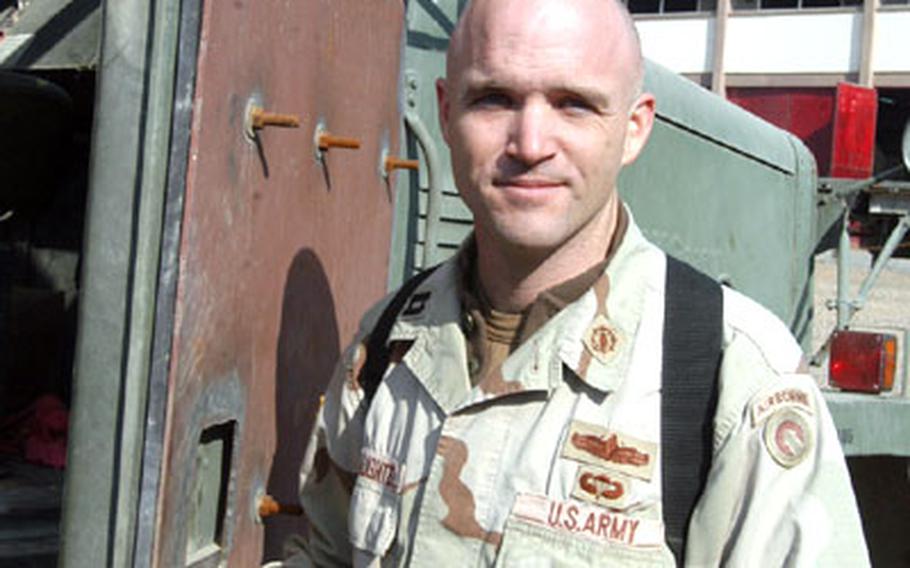 Capt. Michael DeLaughter, battalion maintenance officer for the 7th Transportation Battalion at Logistics Support Area Anaconda, Iraq, shows a homemade upgrade done to the door of a truck. Faced with driving unarmored vehicles across the dangerous Iraq roads, members of the battalion began improvising their own armor. “We took the initiative on this,” said Maj. Mark Paget, the battalion executive officer. “Nobody ever told us no.” (Ron Jensen / S&S)

LOGISTICS SUPPORT AREA ANACONDA, Iraq &#8212; Sgt. David Kamm said soldiers had a motto in the days when they drove the dangerous roads of Iraq protected by nothing more than the thin aluminum of their truck cabs: &#8220;Mission first, lives second.&#8221;

Everybody talked about it in the 7th Transportation Battalion, said Kamm, an Army National Guard member from Michigan, who drives a truck as a civilian.

There was no protection from the increasing bullets and roadside bombs. They had no more protection than a trucker rolling from Lansing, Mich., to Des Moines, Iowa.

Last week, National Guard soldiers in Kuwait questioned Defense Secretary Donald Rumsfeld about the lack of armored vehicles as their units prepare to head north into Iraq. On Thursday, Rumsfeld said he expected the Army to do its best to provide adequate armor for all vehicles used in Iraq.

Maj. Mark Paget, the battalion executive officer, said there was no alternative when the battalion&#8217;s vehicles had to leave Kuwait and drive north last January.

The battalion began a full-scale upgrade of every vehicle that would leave Anaconda, the supply heart of the mission.

Sheets of Plexiglas were fastened to the outside of the doors, which was enough to stop some shrapnel, he said, but did not provide the type of protection drivers wanted.

Kevlar blast blankets were hung in the backs of truck cabs. More than once, the blankets caught shrapnel headed for the drivers. Mylar covered the windows to prevent the glass from shattering when hit by a bullet or a blast.

As the battle against the insurgency in Iraq has progressed, convoys have proved to be a favorite target. More than half of the battle deaths in Iraq have been from the roadside bombs that explode as vehicles pass. Nine deaths are from the 7th Transportation Battalion.

It took seven bullets from a Squad Automatic Weapon to punch through. And an AK-47 fired at the plate barely left a mark.

That convinced the battalion, which began cutting plates and bolting them to doors as fast as possible. The battalion has purchased $800,000 of the armor plate, which is tough but easy to cut.

To speed the process, a template was made so the armored plates could be cut more quickly.

Kamm said that as the armored plates were being cut in the maintenance shop, the drivers were grabbing them.

The 57th Transportation Battalion in Talil visited Anaconda, saw the results and is doing the same thing, the major said. They are sharing their methods with the transportation school at Fort Eustis, Va.

The drivers said they feel safer with the added protection.

Staff Sgt. Doug Stenberg is a driver in the battalion, but a welder in civilian life. He helped fashion many of the homemade upgrades. With 11,000 miles of Iraqi road under his belt, he said the extra duty was no trouble.

He was more than happy to lend his welding skills to the battalion.

Driving in the up-armored vehicles, he said, is more reassuring than before the upgrade.

The vehicles with Level 2 upgrades and the Level 1 vehicles will remain when the battalion begins pulling out soon. The Level 3 vehicles will be driven to Kuwait, where, before they are shipped home, their armor plates will be removed and fastened to the trucks of units going north.

Paget said there is no one to blame for the lack of vehicles arriving in the theater, even 20 months after the war began.

Plus, the nature of warfare has changed, he said. His vehicles would normally be several miles behind the front lines, ferrying supplies to the front.

In this war, he said, the front is everywhere. It simply takes time to adapt to the change.

That&#8217;s why, he said, the 7th Transportation Battalion took the bull by the horns and addressed the problem its own way.