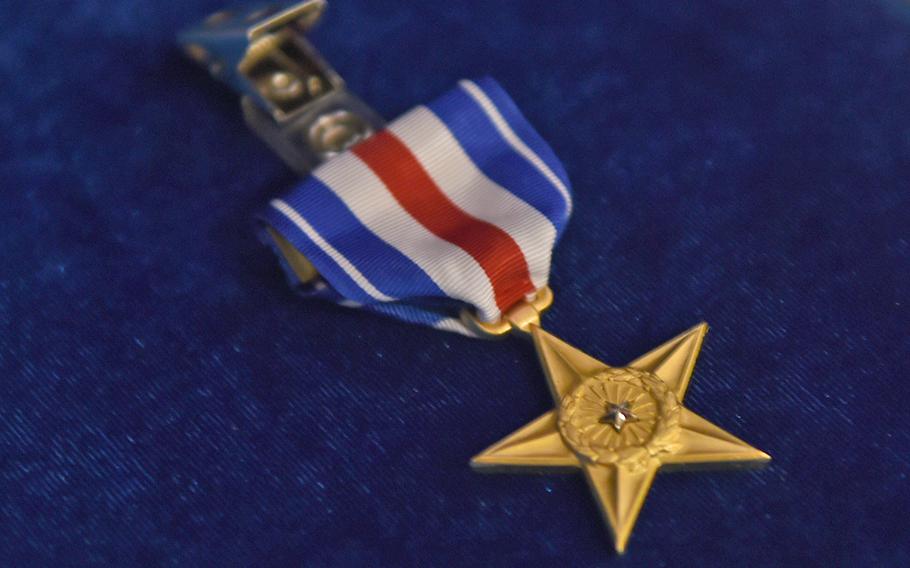 The Silver Star Medal is the third highest award given for valor in combat. (U.S. Air Force)

Read Stars and Stripes' 1972 story about the incident.

WASHINGTON — The four-man Army crew of a UH-1H “Huey” chased a burning C-130 transport plane as it crashed near Saigon in 1972, hovered over the wreckage and pulled five men onto their helicopter. They did this while taking – and returning — fire.

And they all survived.

On Tuesday – 45 years later, to the day – the Huey crew will receive Silver Stars, the military’s third-highest decoration, for their action.

Robert Monette, who was the helicopter pilot that day, said the medals were “unexpected, and very, very humbling.”

“We did these sorts of things in the air cavalry all the time, the difference this time being it was recognized and documented,” said Robert Frank, the air mission commander on the Huey. “Heroic things were done every day. Sometimes somebody would see it, other times they wouldn’t.”

Monette, a chief warrant officer, Frank, a captain, Spc. John DesLauriers and Spc. Leonard “Bruce” Shearer were on a reconnaissance mission when they spotted the C-130 Hercules, its right wing flaming. It had been struck by ground fire while on a supply run to An Loc in southern Vietnam.

The Huey crew watched as the aircraft crashed into a marsh. The Vietnam bureau of Stars and Stripes reported at the time that the C-130 “burrowed into the muck… broke in two and whooshed up a whirlwind of debris and flames.”

“We didn’t think anybody would be able to survive that,” Frank said.

But the crew flew closer and saw survivors.

Shearer jumped out of the helicopter multiple times to drag the airmen from the burning C-130, Monette said. DesLauriers, the Huey’s gunner, fired shots from a M16 rifle into a tree line, where the North Vietnamese were returning fire. Two Cobra helicopters also fired at the North Vietnamese.

“We were running on fumes,” Monette said. “We were critically low on fuel. But we weren’t going any place until we had the guys on board.”

Shearer helped five of the C-130 crewmembers on board, and Frank called for another helicopter to rescue the last two.

The four members of the Huey crew, who now live in different states – Monette in Alabama, DesLauriers in Texas, Shearer in Arizona and Frank in Kansas, will reunite Tuesday in Little Rock, Arkansas, to receive their medals.

Retired Maj. Jack Shields commanded the four men as part of the Army’s 9th Cavalry Regiment. He said he had the idea to secure medals for them in 2005, when the Huey crew and the men they rescued first reunited.

The April 18, 1972 mission was Frank’s last in combat on that tour. A few days afterward, he returned to the United States, and he didn’t learn the names of the survivors until 2005.

Before he left, he submitted handwritten recommendations to the Army for Shearer and DesLauriers to receive awards for that day. He assumed they were “lost in the shuffle.”

In the years following the 2005 reunion, Shields attempted to apply for the medals – this time including Frank and Monette in the request.

“We talked about it several times, and some other folks had tried,” Shields said. “The biggest roadblock we had to overcome was it was so long ago.”

Thomas McNabb, military liaison for Rep. French Hill, R-Ark., worked to get the medals approved, providing a packet of historical information to the Defense Department and letters of support from retired Air Force leadership. Hill will present the medals Tuesday.

“Relieved is a good word for it,” Shields said. “We wanted to get an award for these guys, and it finally came to pass. I’m just glad to see it happen.”

Shields guessed a large crowd would gather for the medals presentation in Little Rock, which is home to the Air Force base that trains C-130 aircrews. At least a few of the seven survivors from the 1972 crash, or their families, are expected to be there.

After the war, Monette, DesLauriers, Shearer and Frank stayed in touch with one another. After the 2005 reunion, they also kept track of the C-130 survivors. Six of the survivors were American, and one was part of the Vietnamese air force.

“They never made a Mayday call. By all accounts, no one knew they had been shot down,” Monette said. “So, there’s seven people who were able to continue with their lives. They came home, got married, had children, had grandchildren.”

Robert Kirkpatrick, the navigator on the C-130, once wrote a letter to Monette, thanking him for saving his life, Monette said.

“It’s been heartwarming to know you made a difference in someone’s life, and you get to meet them,” Frank said. “Sometimes, you just never know that.”