An outsider in your own life 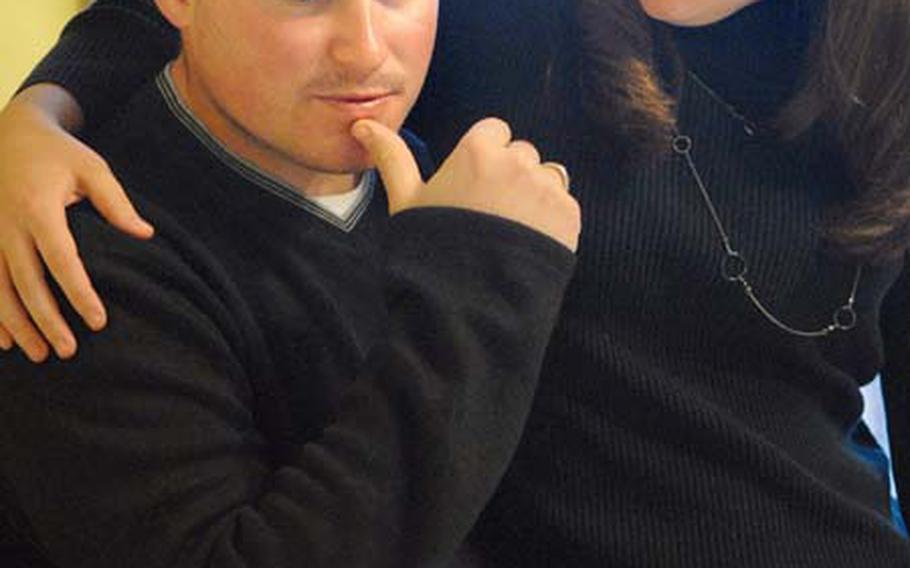 1ST Lt. Chris and Stephanie Holmes, a newly married couple, share their experiences being apart and what it&#39;s like reuniting after a long deployment Oct. 28th, 2008 at their home near Watertown, NY. Holmes is assigned to Company B, 2nd Battalion, 22nd Infantry Regiment, 1st Brigade, 10th Mountain Division, and just returned home from his deployment to southern Kirkuk, Iraq. (Ben Bloker / S&S)

In the beginning, it&rsquo;s easy.

"The first week or so is like the honeymoon. That&rsquo;s a normal part of coming home. But then you start noticing &hellip; so many things," said Watkins, who works with returning Afghanistan and Iraq veterans at the Mid-Atlantic Mental Illness Research, Education & Clinical Center, or MIRECC, at the Durham, N.C., Veterans&rsquo; Affair Medical Center. "That picture you had &mdash; it&rsquo;s just not the same.

"Everyone has some difficulty with adjustment. Coming home is harder than going."

For soldiers of Company B, 2nd Battalion, 22nd Infantry Regiment, 1st Brigade, 10th Mountain Division who spent 14 months in Iraq, life does not magically pick up where it left off when they return home, experts say. Instead, there are changes to deal with &mdash; physical, psychological, relational &mdash; in the family and in the soldier. There is often grief, loss, survivors&rsquo; guilt, changes in the family dynamic and idealized family images shattered by reality.

Capt. Matt Lee, "Triple Deuce" Company B commander, had little family to come home to; his wife, also an Army captain and a helicopter pilot, deployed for a year just as Lee was coming out. He had hoped to get a job with her unit to be with her.

"I would have cleaned toilets," Lee said.

He wishes he was still in Iraq. Instead, he&rsquo;s alone, with the euphoria of being home and safe and seeing family vanished.

"That lasts about a month," Lee said. "Then you just kind of get in your routine, you get a little down. &hellip; I work out a lot to pass the time. You try not to spend too much time alone in the house if you can."

There is often a feeling "of being an outsider in your own life," said Harold Kudler, a Duke University psychiatrist and MIRECC chief of mental health services.

Many of these things take time to work through, experts say. And the truth is some things will never be the same.

"There will be pieces of this within them the rest of their lives," Watkins said. "The hypervigilance &mdash; it&rsquo;s not ever really going to go away. That&rsquo;s what they were taught. That&rsquo;s how they survived."

Lee has noticed it.

"Just hearing booms kind of really gets you," he said. "You&rsquo;re more tense and uneasy. The snow fell off my neighbor&rsquo;s roof and shook the house &mdash; I jumped," he said.

And he&rsquo;s having sleep problems.

"You sleep four hours, then you wake up," he said. "You may or may not fall back asleep."

About 80 percent of combat veterans who deal with the changes and challenges will adjust after nearly universal periods of sleeplessness and anxiety, studies show. But a significant 20 percent have continuing difficulties, with post-traumatic stress, depression and alienation.

"Some people turn away from the process. They become isolated. They say, &lsquo;I was better off in the war,&rsquo; " Kudler said. "They say, &lsquo;I don&rsquo;t really fit. I&rsquo;m toxic to my family. I should go back.&rsquo; It&rsquo;s one of the saddest things I&rsquo;ve ever heard."

War is a formative, life-changing experience. And despite its horrors, it can provide intense bonding and excitement that leaves the regular world feeling dull. Historian Martin van Creveld argued in a recent book, "Culture of War," that making war is part of human nature and that men take joy in combat.

Van Creveld, who has advised the U.S. and Israeli militaries, writes that fighting, with its heightened awareness, its rushes of dopamine and adrenaline, is thrilling, like sex.

"You&rsquo;re going to think I&rsquo;m crazy: I honestly love my job with a passion," said Spc. William Medlin. "I was lead driver, voluntarily. I just like being on point."

"You feel alive. Your mission is unified," Watkins said. "You&rsquo;re not going to find that intensity and adrenaline [at home]."

And the soldiers&rsquo; bond is unique &mdash; and intense.

"They&rsquo;re closer than brothers," Kudler said. "They really have each others&rsquo; backs. And they&rsquo;re not going to find that again."

Sgt. David Johnson couldn&rsquo;t wait to leave the Army and return to his family roofing business and the practice of law in Spokane, Wash. Then he was discharged, and being home was great, but it was different than before.

He missed his buddies.

"There&rsquo;s a lot there," he said. "And back in Spokane, I don&rsquo;t know that many people."

One of the first problems to crop up when soldiers return home, they say, is the loneliness a soldier often feels without his buddies &mdash; his family for the past year or more &mdash; and his "real" family&rsquo;s resentment of that.

Another big adjustment is learning how to drive normally again &mdash; not fast and in the middle of the road like in Iraq.

Likewise, soldiers who are parents have a more complex family adjustment than couples do.

Children change a lot in 14 months, and the parent&rsquo;s absence often causes distress, in different ways depending on their ages.

According to his wife, Marcetia, Sgt. Thomas "T.J." Brown seemed to expect the three children to whom he was returning "to be little porcelain dolls," and was harsh and impatient with them.

"I told him I was concerned," she said.

She enrolled them both in parenting classes.

Kudler said one single mother who had left her toddler with her own mother when she deployed came back to a child who protested the confusing disruptions in her young life.

"&lsquo;I wish you&rsquo;d go back to Iraq and I could go back to Nana&rsquo;s,&rsquo;" the child told her mother, Kudler said. "It went right through her heart."

Children grown accustomed to the soldier&rsquo;s absence turn naturally to the other parent for advice, nurture, everything. The soldier feels like an outsider, Kudler said.

Or as Medlin put it, as his marriage was unraveling during an R & R: "I just didn&rsquo;t feel needed."

Wives and children, too, can be troubled when the hero they&rsquo;ve been waiting for finally returns, and with feet of clay.

"It can be very stressful for spouses to know their loved one is a hero but then to experience what can be very disturbing: the irritability, the sleep problems, the alcohol use," said Brig. Gen. Lorree Sutton, head of the Defense Department&rsquo;s Center of Excellence for Psychological Health and Traumatic Brain Injury.

One such Company B "hero" &mdash; a sergeant who was a good combat soldier according to his commander but "always a nutcase," according to a fellow soldier &mdash; fell from grace in a spectacularly gruesome and public way. Three months after coming home, the sergeant was in the county jail and facing prosecution for two felony counts of aggravated animal cruelty. According to police, the sergeant hanged and beat his two dogs to death after his girlfriend had fled the home with their baby.

he grind of repeated deployments and a traumatic event such as the suicide truck bombing experienced by Company B can raise the risks for soldiers experiencing prolonged difficulties after returning home.

"There is a wear and tear that does affect troops and families with each deployment, no question," Sutton said, and increased exposure to trauma does lead to increased risk.

The timing can vary. One study at Walter Reed Army Medical Center of 88,000 soldiers who had been to Iraq found that after six months, half of those who had shown symptoms of PTSD were free of them, Kudler said.

"However, there were twice as many new cases," he said.

Watkins said that PTSD should be "normalized" as a routine reaction, shared by all sorts of people to traumatic events. "If we normalize PTSD, people can gain the skills and the tools they need."

"Flashbacks, nightmares, being tense &mdash; this is the body, mind and spirit&rsquo;s natural way of healing from trauma," she said. "These are issues warriors have dealt with since the beginning of time."

Company B experienced a horrific truck bombing, which killed a staff sergeant and wounded many more, most seriously and permanently the company&rsquo;s first sergeant. It would add to the component of grief, Kudler said.

"You have to push on in a combat zone; there&rsquo;s no time for grief," Kudler said. "Grief is often put off until they come home and there&rsquo;s time. A lot of them have put it in a box so tight &mdash; and that haunts them."

Yet the fact that they returned to Fort Drum as a unit, unlike many National Guard and Reserve soldiers, works in their favor, Watkins said.

"They had this horrible thing happen to their unit," she said. "But this unit is coming home as one. That has some opportunities for healing."

Healing comes from talking things out, experts said, telling their stories, from taking self-assessments over time, from having reunions with buddies and their families.

"At any point, if what you are experiencing is preventing you from doing what you need to do, that&rsquo;s the time to get help," Sutton said. "Do not wait a moment."

"Talking to people who understand really does make it better," Watkins said.

"Family members are usually the first to pick up on how the soldier is doing," said John Fairbank, MIRECC chief. "They&rsquo;re also critical to getting help."

But patience and forbearance also play their roles when soldiers return from war.

Kudler likens the story of Odysseus&rsquo; return to Ithaca from the Trojan War. It took a decade, with a variety of trials, including a stop in Hades, a year with an enchantress and falling prey to the lotus eaters &mdash; metaphors for the mind, infidelities and drug abuse &mdash; all while his wife, Penelope, faithfully awaited him.

"It takes Odysseus 10 years, and it wasn&rsquo;t that long a trip," Kudler said. "It&rsquo;s metaphorical. It takes a long time to come home."

A look at the people in the "Coming Home" series ...