An Lao: A beautiful, scenic, rice-rich and deadly valley Two tanks from 1st Platoon, A Company, 60th Armored Cavalry move in to help soldiers shield a wounded comrade during fighting along a riverbank in the An Lao Valley in 1967. (John Utt/Stars and Stripes)

Two tanks from 1st Platoon, A Company, 60th Armored Cavalry move in to help soldiers shield a wounded comrade during fighting along a riverbank in the An Lao Valley in 1967. (John Utt/Stars and Stripes) 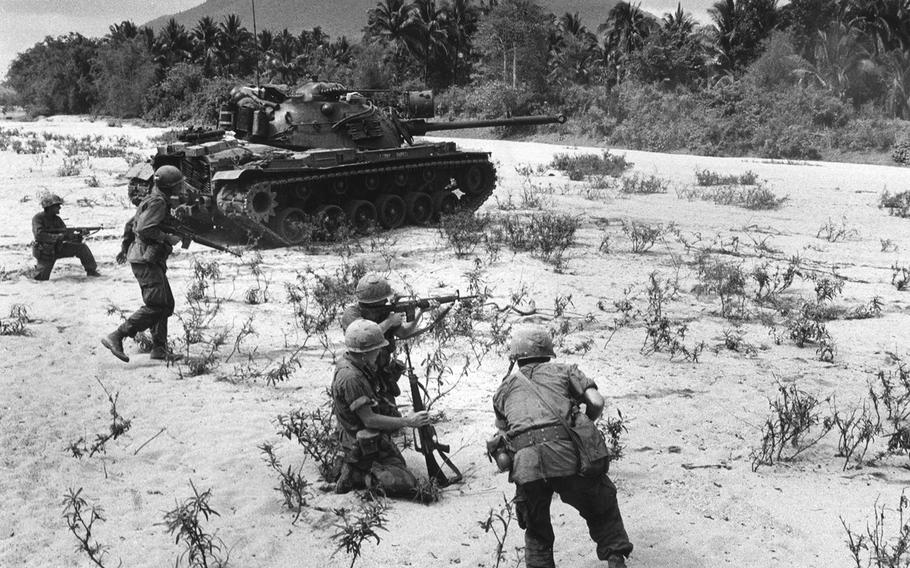 Troops move up with a tank ahead of them during fighting in the An Lao Valley in 1967. (John Utt/Stars and Stripes) A 1st Cavalry unit spots Viet Cong in the An Lao Valley, just before fighting begins, in April, 1967. ()

For more than 10 years the An Lao has been a north Vietnamese Army and Viet Cong sanctuary, a base from which the Communists dipped into the rice-rich area for taxes, rice, salt, fish and forced laborers.

The 3rd NVA Div. had its headquarters and rear area somewhere in the 10 miles of jungled mountains which line the valley. Both valley walls boast natural caves and rock formations along its entire length from which a platoon could hold off a battalion for days.

The North Vietnamese tucked their fixed installations, their clothing factories, weapons repair shops, hospitals, printing shops and even an R and R center into what they considered "an impenetrable stronghold."

Nearly 7,000 people farmed the valley floor, a mile and a half across at its widest point, on both sides of the twisting An Lao River, providing an additional source of labor, food and homes for the battalion of NVA regulars regularly stationed there.

The Communists closed the schools in 1958. South Vietnamese government control shrank to only the district headquarters, which was finally overrun in 1962.

The valley and its people had been controlled by the enemy since then.

In a short while, the An Lao will be defoliated and declared a free-fire zone.

Six weeks ago, the 1st Bn., 7th Cav. went into the valley to stay. During that time they've been moving up and down the valley, moving out civilians and fighting the harassing forces left behind when the enemy main force fled.

A platoon was pinned down recently by heavy automatic weapons fire in a small hamlet at the foot of the western valley wall.

Moving down the riverbank 1,000 meters to the beleaguered platoon, the duster spotted a squad under fire on the other side of the river.

The squad had moved into the open at the edge of the river prior to crossing and reinforcing the platoon in the hamlet.

Miller plunged the duster into the 300-foot wide, 6-foot deep river to pull the nine men out of trouble.

Two tanks of the 1st Platoon, A Co.. 60th Armored Cav. arrived, one backing in front of a wounded man to shield him. and blasted away at the .jungle.

The bank on the far side of the river was too high for either the tanks or the cluster to climb, so the eight remaining infantrymen waded across.

Three were swept away by the water, but managed to scramble ashore 300 feet downstream, minus their equipment.

There were 300 yards of open rice paddy between the squad and the hamlet. Only five had weapons and all were low on ammunition.

"This valley has a strange fascination for us. I can't quite explain it. Maybe, it's because the An Lao is so beautiful and so deadly. But it's my valley."

Since the 1st Cav. battalion has been in the An Lao, 130 of its defenders have died.