An honorable end for an emblem 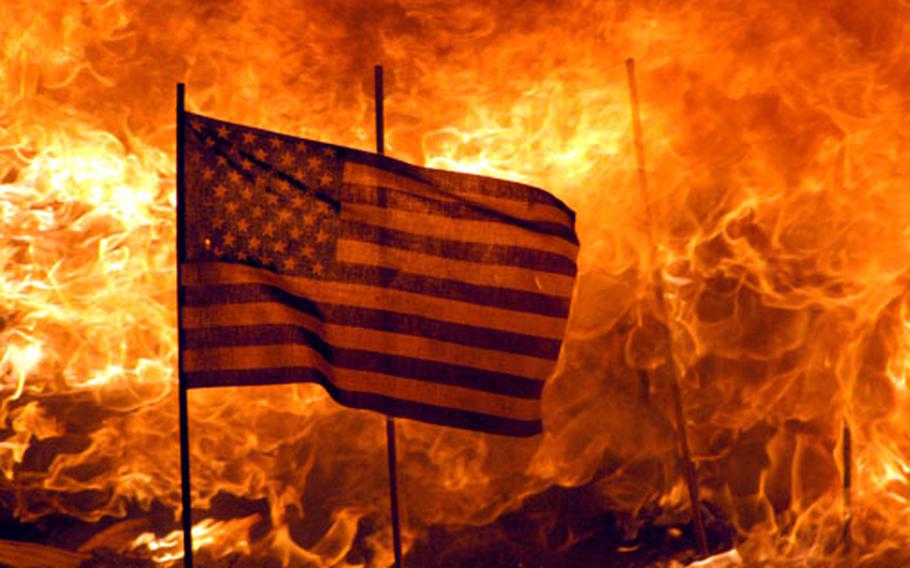 Flames surround a U.S. flag as members of GI Joe Post 244 in Jeffersontown, Ky., near Louisville, retired more than 6,500 flags during a June 14, 2003, ceremony. Burning a flag no longer fit to fly is the proper way to dispose of it. (Courtesy of The American Legion Magazine)

Flames surround a U.S. flag as members of GI Joe Post 244 in Jeffersontown, Ky., near Louisville, retired more than 6,500 flags during a June 14, 2003, ceremony. Burning a flag no longer fit to fly is the proper way to dispose of it. (Courtesy of The American Legion Magazine) Members of GI Joe Post 244 in Jeffersontown, Ky., prepare the flags to be retired during the ceremony in 2003. (Courtesy of The American Legion Magazine)

Eight years ago, Charles Taliaferro found a tattered U.S. flag someone had ditched in a Dumpster near his California home.

&#8220;I got to thinking,&#8221; said the Vietnam veteran. The result of those thoughts: The proper disposal of U.S. flags would be yet another service he and his band of poker brothers would take on.

In 1990, the self-described &#8220;ragtag bunch of military types&#8221; met weekly around Taliaferro&#8217;s kitchen table for penny-ante poker games. They liked an idea posed by player Johnny Choate, Taliaferro&#8217;s fishing pal: part of their winnings should go to help hospitalized and homeless veterans.

Today, they make up the Kitchen Table Gang, and they and other volunteers send care packages, letters, phone cards and the like to veterans at VA centers and military hospitals, and to troops serving around the world, particularly combat zones, Taliaferro said.

So far in the first three months of 2005, the Kitchen Table Gang has received 1,508 flags from people all over the country asking that they be disposed of properly. On Thursday, Taliaferro and his wife counted 4,091 flags stored in their Madera, Calif., garage awaiting this June&#8217;s ceremony.

Information about where to send flags or tips on sending care packages is posted on his Web site: kitchentablegang.org.

With America at war, thousands of groups like the Kitchen Table Gang have sprouted across the country with goals of making life better for deployed troops, said Joe Davis, a spokesman for the VFW, which represents 2.4 million members at 9,000 posts in the United States, Europe the Pacific and Latin America.

&#8220;Three decades ago, America turned its back on an entire generation of soldiers because Americans couldn&#8217;t disassociate the war from the warrior,&#8221; Davis said. &#8220;That attitude changed noticeably with the first Gulf War, when a collective America seemed to vow &#8216;never again.&#8217;

&#8220;[Today], dozens of small nonprofits have since been created with one focus in mind: to support the troops.&#8221;

The VFW, American Legion and Boy Scouts are among groups collecting unserviceable flags and holding ceremonies to properly dispose of them.

Which means burning them.

&#8220;The flag, when it is in such condition that it is no longer a fitting emblem for display, should be destroyed in a dignified way, preferably by burning,&#8221; reads the sole mention in the Federal Flag Code of how to dispose of the flag.

There is no prescribed ceremony. No set words that must be uttered. No one way of folding, said Mike Buss, the flag educational expert for the American Legion.

Nor is there any legal definition of when a flag is no longer a fitting emblem, he said. Or that flags cannot be be washed, dry-cleaned or sewn, for example. However, an executive order signed in 1959 by President Eisenhower spells out, among other things, a flag&#8217;s exact proportions, Buss cautioned.

&#8220;The problem some people have is that along the edge, it sometimes frays, and people would cut the edge and re-hem it, and then it is not proportionally correct,&#8221; he said.