An HBO crew hoped to film at a base in Italy. Then the Army saw the script. 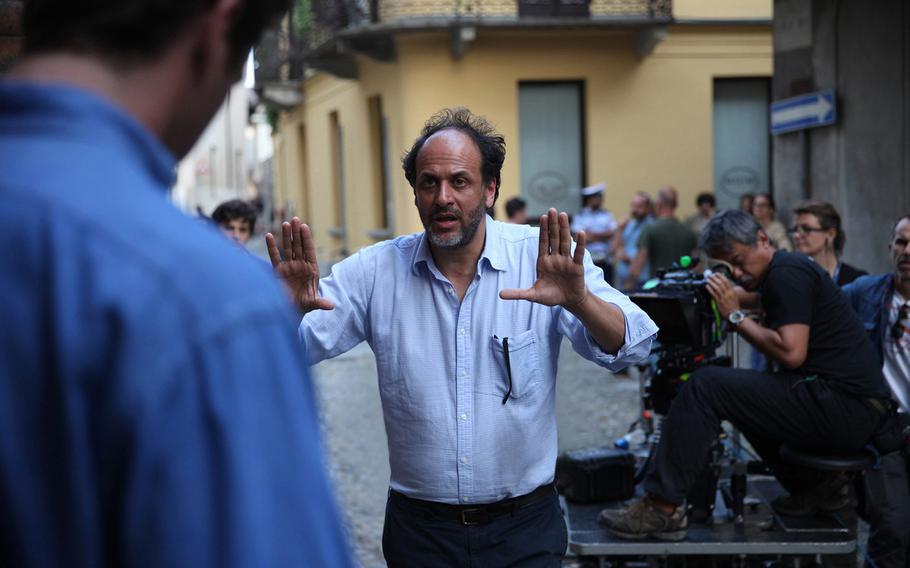 Luca Guadagnino, director of the Oscar-winning fillm ''Call Me By Your Name,'' is working on a series with HBO involving teens growing up on a U.S. military base in Italy. The Defense Department pulled their support for the project due to concerns about content. (Courtesy of Sony Pictures Classics)

The story: the coming of age of an American boy and a group of friends one glorious summer after the boy moves in with his mother, the commander of a U.S. Army base very much like Caserma Ederle.

The Army: wants nothing to do with it.

An upcoming HBO series co-written and directed by Luca Guadagnino, called “We Are Who We Are” and focusing on American military teenagers in Italy, won’t have the Defense Department’s support, said Lt. Col. Robert Bockholt, film and television liaison at the Los Angeles office of the chief of public affairs.

“There were concerns about the content of the script,” Bockholt said. “There are themes in the script that do not fit in what the Defense Department would support.”

Bockholt declined to specify what those themes were but said the decision to pull support for the series was made after the second script revision.

Series producer Ricardo Neri said that he could not discuss the eight-episode series until after HBO officially announced it in the next week or so.

But online publications have detailed some characters. There’s “Fraser Wilson, teenager from New York City,” according to Observer.com, who moves in with his mother. She’s recently been promoted to colonel, she’s married and she’s a lesbian.

Fraser slowly gets to know a group of other Army teens on the base as well as some local Italian teens. They hang out at the beach, “indulging themselves a little too much.”

Fraser becomes close to the kickboxing, rifle-shooting, poetic Caitlin Harper, and the two “embark on a period of self-discovery over the golden summer.”

Fraser also misses his friend, Mark, from the U.S. And he develops a crush on an older soldier named Jason.

That scenario is reminiscent of Guadagnino’s Oscar-winning film, “Call Me By Your Name,” which features a summer courtship in northern Italy between a boy, 17, played by Timothee Chalamet, and a visiting graduate student, 24, played by Armie Hammer.

Guadagnino makes movies “that turn your gaze into near-touch, inviting you to see and almost caress their sun-warmed bodies,” The New York Times film critic Manohla Dargis wrote in a 2017 review.

Neri said that he was “a little bit” surprised when the military pulled its support after more than a year of discussions. “We were talking positively,” he said.

The filmmakers had hoped, Neri said, to film on Caserma Ederle after scouting the location, headquarters of U.S. Army Garrison Italy and U.S. Army Africa, and finding it perfectly suited to telling the story. “It was real,” Neri said.

They now plan to shoot on a set in nearby Padua.

The services have long provided support — equipment, troops, locations — to movies and television, if they approve of the projects.

Parts of “The Long Road Home” were filmed at Fort Hood, Texas, made to look like Sadr City, Iraq.

Robins Air Force Base in Georgia was dressed up to look like Joint Base San Antonio-Sam Houston, Texas, in “15:17 to Paris.”

Filmmakers seeking military support are required to send in copies of the script, which according to DOD are vetted to ensure accuracy and promote recruitment and retention efforts.

Last year, Army Lt. Col. Tim Hyde, the deputy director of the Los Angeles Office of the Chief of Public Affairs, told a DOD publication that “There’s a point where we just have to say no – ‘It’s either going to happen like this, or it’s not going to happen at all.” But Hyde said it rarely comes to that.

Production agreements also require DOD to be able to review a rough cut of a film, “so officials can decide if there are areas that need to be addressed before a film is released,” according to the dodlive.mil website.

Neri said “We Are Who We Are” wasn’t yet fully cast. Its release date has not been disclosed.