An eye in the sky that saves lives 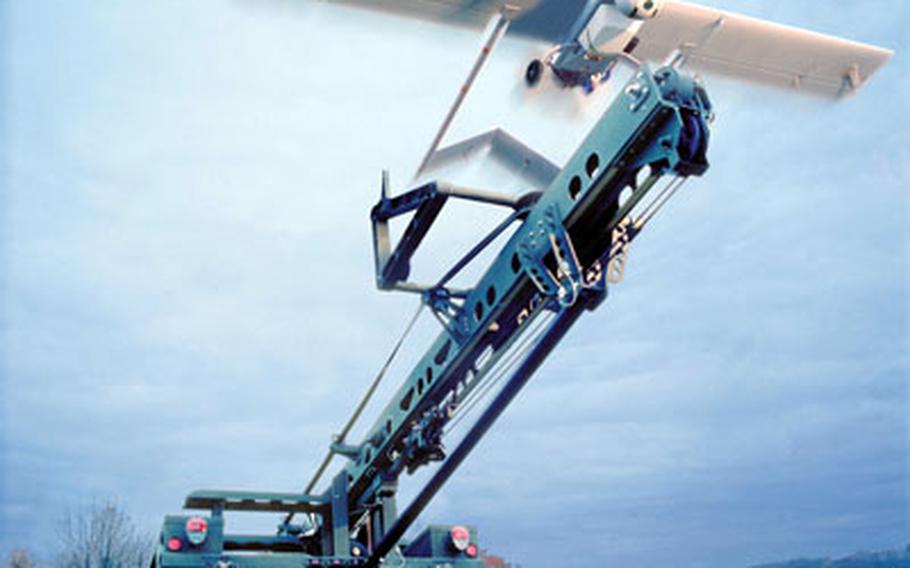 An unmanned aerial vehicle, like the Shadow, has been used in actual battles in the war on terrorism, along with gathering information on the enemy. (Courtesy AAI Corp.)

An unmanned aerial vehicle, like the Shadow, has been used in actual battles in the war on terrorism, along with gathering information on the enemy. (Courtesy AAI Corp.) Finch believes in the might of little airplanes that others might mistake for toys, so much so that he&#8217;s learned to fly them in order to do for others what UAV pilots once did for him.

Help them out of a jam. Save their lives.

Now he&#8217;s an unmanned aerial vehicle pilot, getting ready to deploy to Iraq with half of Company C, 501st Military Intelligence Battalion to support the 1st Armored Divisions&#8217;s 2nd Brigade Combat Team. Though he&#8217;s a relative rookie, he has a profound understanding of what UAVs can do.

The fighting was so intense that Air Force A-10s and Apaches had to break off, shot up and out of fuel and ammunition. Finch and his 11-man squad wound up surrounded by an estimated 50 enemy fighters, and with no air cover for two hours.

Later, Finch was impressed that as he lay wounded in the hospital, the Predator crew came to visit him. So impressed that he decided to join the drone revolution currently sweeping the Army.

&#8220;At times it was like a whirlwind,&#8221; Weiland said of the rush to set up systems, which includes RQ-7B air vehicles, ground control stations, as well as other components and support equipment. After training in Baumholder and Grafenw&#246;hr they went to maneuver training at Hohenfehls to integrate into the 1st AD&#8217;s 2nd Brigade.

The 501st is the first unit to field a UAV company in Germany, rather than deploying from the military intelligence center at Fort Huachuca, Ariz.

In July alone, the Army spent $129 million for 12 additional Shadow systems, which include 48 drones, according to Department of Defense contracts.

Which is where Finch comes in.

After his Anaconda wounds and other dust-ups &#8212; he&#8217;s been shot five times, stabbed twice and hit with shrapnel from an RPG &#8212; Finch was too beat up to stay an infantryman.

Looking at a medical discharge, Finch decided that it was time to pursue a new line of work. So instead of getting out, he was able to change military occupational specialty from 11 Bravo to 96 Uniform, or UAV pilot. &#8220;I&#8217;m done pounding ground.&#8221;

Not that it was easy to move from the conventional Army to being commanders&#8217; high-tech eyes in the sky.

Actually flying the UAVs is fairly easy, Finch said. What&#8217;s not so easy is getting through the same Federal Aviation Administration material pilots must master.

Though a UAV pilot stays on the ground, the drones are still aircraft and subject to all FAA visual flight rule requirements, Weiland said.

But he did it, and now he&#8217;s going to Iraq, convinced he can complete the circle from saved to savior.

To the untrained eye, the UAVs are underwhelming and deceptively toylike, said Weiland, Faulkner and Finch. Unlike the large Air Force Predator, the 501st&#8217;s drones don&#8217;t even have weapons, they said. But they can provide information, and information is power.