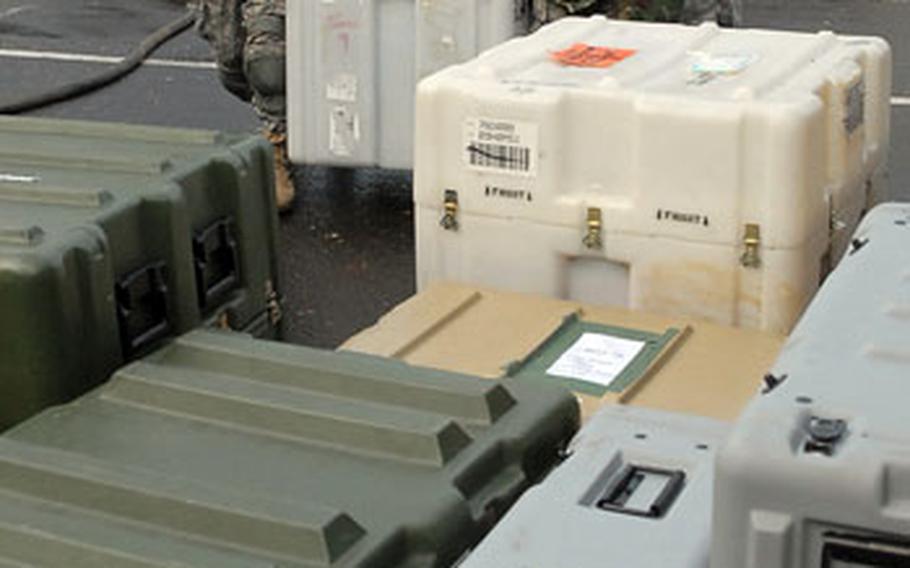 KAISERSLAUTERN, Germany &#8212; Inside a cocooned maze of green tents, soldiers with the 21st Theater Sustainment Command are supporting a humanitarian aid mission &#8212; kind of.

Actually, the soldiers are participating in Agile Challenge 09 &#8212; an exercise focusing on a scenario in which the logistics command would deploy its early entry command post to coordinate getting water, food, medical supplies, sleeping bags and the sort to those in need.

"Nobody&#8217;s really going to put food on a C-17 to fly to some far-off country, but we&#8217;ll do all the coordination to do that up to that point," said Lt. Col. Lance Burton, chief of 21st Theater Sustainment Command&#8217;s material readiness branch.

The training scenario hits close to home for the 21st TSC. Its deputy commander headed the U.S. military&#8217;s humanitarian relief effort this summer in the Caucasus-region nation of Georgia, and its soldiers played a key role in the mission.

The early entry command post can be set up from scratch and be fully functioning in just 50 hours, which is a really good time, said Sgt. Maj. Tomas Gonzales, sergeant major of operations and plans at the 21st TSC.

"The (commanding general) pretty much said he wanted it expeditionary so he created his own bridge from where we were to where he wants to go," he said. "We can pick it up, divide it up into sections, send in what we need and if we need to follow it up, we can do that. He has that capability now. We have the assets."

The exercise is in preparation for Austere Challenge 09, which is a U.S. Army Europe joint task force exercise scheduled for the spring. The purpose of the ongoing 21st TSC exercise is to prepare itself to better support its higher headquarters and to bring the new soldiers it acquired this summer up to the level of proficiency the command had last spring before soldiers rotated out on moves, Burton said.