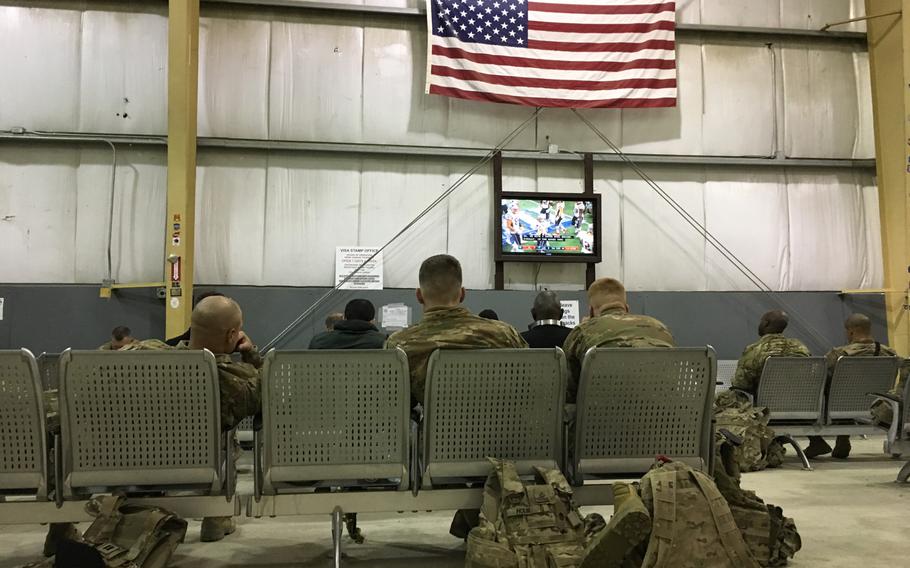 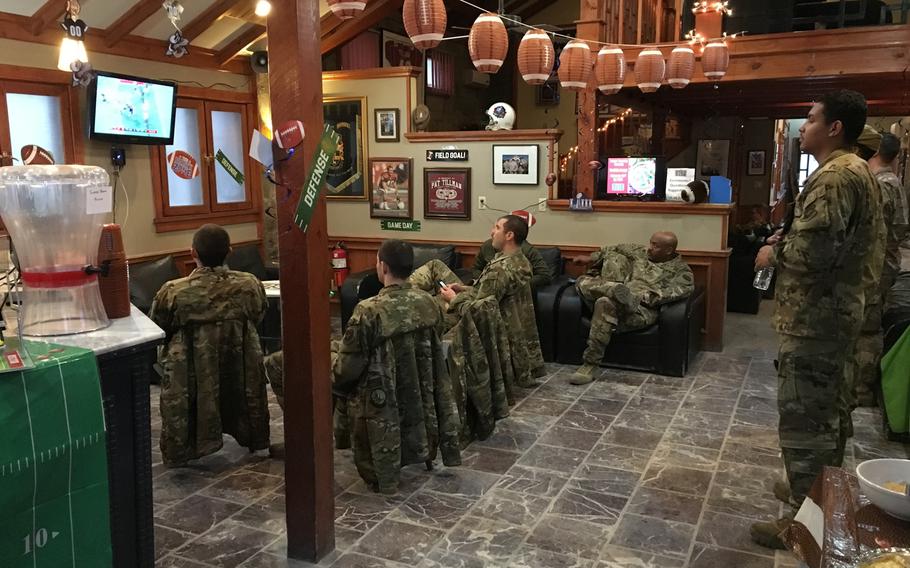 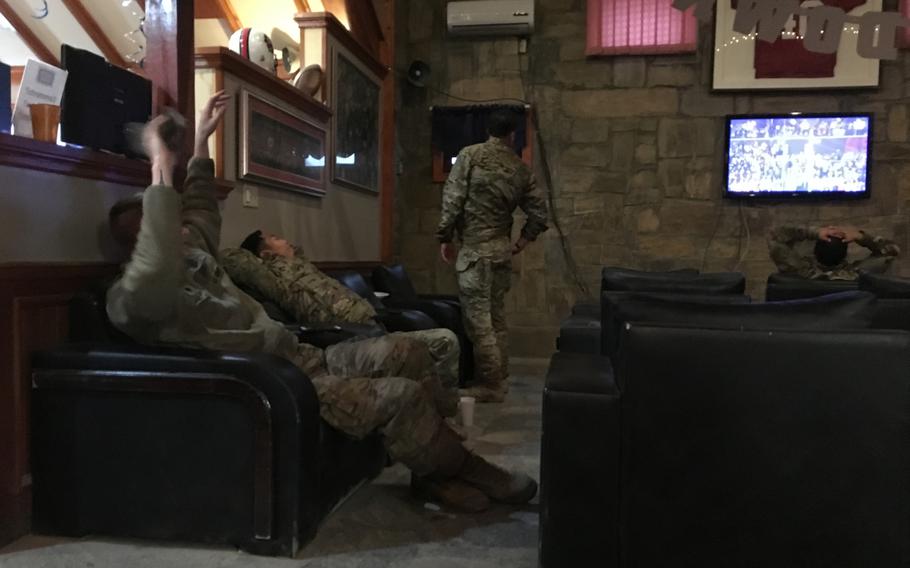 American troops stretch and yawn after watching the Super Bowl at Bagram Air Field on Monday, Feb. 4, 2019. It was 4 a.m. in Afghanistan when the game began. (Phillip Walter Wellman/Stars and Stripes)

BAGRAM AIR FIELD, Afghanistan — As sounds of cheer erupted on the television screen, a group of about 20 American servicemembers stretched and yawned — one awoke from sleep looking lost.

The New England Patriots had just defeated the Los Angeles Rams to win the 2019 Super Bowl and the troops had been up since before dawn to watch the game.

The viewing party at the Pat Tillman Memorial USO, named for the former Arizona Cardinals safety and Army Ranger killed in Afghanistan in 2004, was adorned with football-shaped decorations. It was just one of several events held at the United States’ largest military base in Afghanistan to mark America’s most-watched televised sporting event.

The kickoff, 6:30 p.m. Sunday in Atlanta, Ga., was at 4 a.m. Monday here. Festivities, which included multiple watch parties, raffles and buffet spreads full of familiar snacks from back home, began about an hour earlier.

“It’s not a big deal,” said Army Spc. Alyssa Johnson, a Rams fan, when asked about waking early for the game. “It’s for football and an easy sacrifice to make.”

Johnson was one of several dozen people at the base’s main Super Bowl party, held at a coalition recreation center. Most attendees at that event seemed energized.

“I’ve been to some college parties and this is up there with those,” said Johnson, standing in front of a large cake with the Rams’ and Patriots’ logos on it. An adjacent buffet included Super Bowl staples like nachos, mozzarella sticks and pizza.

Although he expected to be tired later in the day, Army Spc. Tyler Chmieleski also said it was worth waking up early to watch.

“I’m a big Patriots fan. My whole family is from the New England area, so to watch them play in another Super Bowl is a good thing to experience, even if it’s at three in the morning,” he said. “I’ll just have to have a lot of coffee and energy drinks to keep me going for the rest of the day.”

The game was projected on two large screens in different rooms at the center. One showed an Armed Forces Network broadcast, which didn’t air Super Bowl commercials, long a highlight of the annual spectacle. Nearly everyone chose to watch a second version, streamed by the NFL, which included the ads.

“The commercials are half the reason why people want to come out,” said Don Baumgartner, Morale, Welfare and Recreation director at the base and the event’s organizer.

CBS was selling 30 seconds of commercial airtime for more than $5 million, Bloomberg reported. A series of “Game of Thrones”-inspired Budweiser ads went over particularly well with the crowd, who couldn’t drink themselves while watching the game because of rules barring troops in Afghanistan from consuming alcohol.

Baumgartner was happy with this year’s turnout and said most of the servicemembers were appreciative, despite the early hour. “People like the atmosphere and like being able to watch the game with their battle buddies,” he said.

At halftime, Baumgartner drew the winners of a pair of door prizes, a pair of gaming consoles.

“Right before the raffle my friends asked, ‘What do we want to win?’ and I said, ‘The Switch,’ because I don’t have one of those and I want to play Mario Party,” Sila said. “So I’m pretty pleased with the raffle, that was a good idea.”

Though not an official event, troops waiting for weather-delayed transport at Bagram’s helicopter passenger terminal also cheered as they watched the game on small screens in the waiting area, a much more Spartan setting with metal chairs and fridges full of bottled water.

With a 13-3 victory — the lowest-scoring Super Bowl in history — the Patriots broke a tie with the Pittsburgh Steelers for the most wins in playoff history, 36, and tied the Steelers’ record six Super Bowl victories.

Although he didn’t get to witness as many touchdowns as he would have hoped for, Sila said it was still worth the early wake-up to watch.