An early holiday gift for families at Bamberg 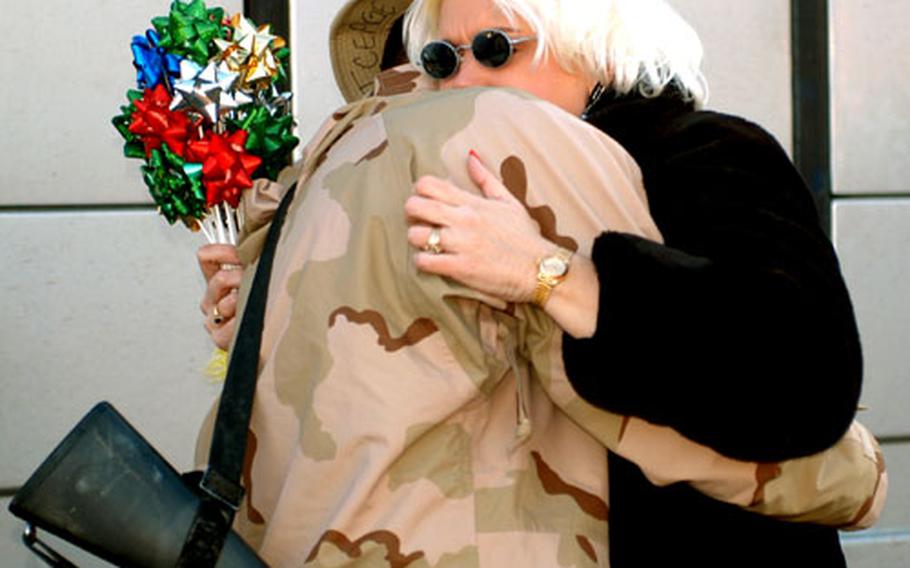 BAMBERG, Germany &#8212; Christmas came early for the families of about 300 soldiers from the 54th Engineer Battalion who returned Tuesday and Wednesday from a 10-month deployment to Iraq.

Screaming, cheering and crying family members greeted the equally teary-eyed soldiers as they stepped off commercial buses that carried them from Ramstein Air Base home to Warner Barracks.

The tears that fell on the parking lot where the buses unloaded Tuesday were not the first the families had shed during the deployment.

Families learned before Thanksgiving that the soldiers were on their way home, but no specific date was given, Leatherbery said. Last week the date of the return was set for the weekend, but the soldiers were delayed and returned a few days later. The delay almost cost Angela Wagner the chance to see her son.

Wagner and another son, Daniel Ladislas, traveled from Corydon, Iowa, to greet her son, Spc. Louis Ladislas, when he returned to Warner Barracks. However, she said, her tickets required that she fly back Sunday. After several phone calls to the airline, Wagner was able to change her flight arrangements.

Wagner had also visited Bamberg before the deployment to send her son off to Iraq.

She said it was a long 10 months as she waited for his return.

Wagner eventually subscribed to the battalion&#8217;s FRG newsletter and got periodic updates on her son&#8217;s unit.

Louis Ladislas knew nothing of the visit until he stepped off the bus and saw his mother and brother waiting for him.