An austere base in Afghanistan rapidly expands for more US troops 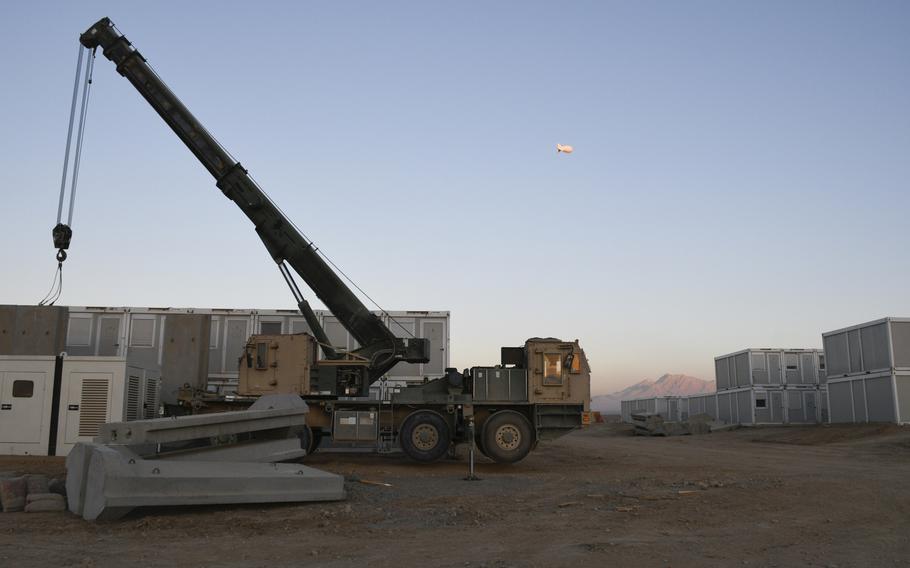 Buy Photo
Engineers at Camp Dahlke West in Afghanistan install new housing units Dec. 16. 2018 to accommodate a rapid expansion of soldiers on the base in the last year. The base population quintupled in size and has been built up to host the 2nd Security Force Assistance Brigade in 2019. (J.p. Lawrence/Stars and Stripes)

Buy Photo
Engineers at Camp Dahlke West in Afghanistan install new housing units Dec. 16. 2018 to accommodate a rapid expansion of soldiers on the base in the last year. The base population quintupled in size and has been built up to host the 2nd Security Force Assistance Brigade in 2019. (J.p. Lawrence/Stars and Stripes) 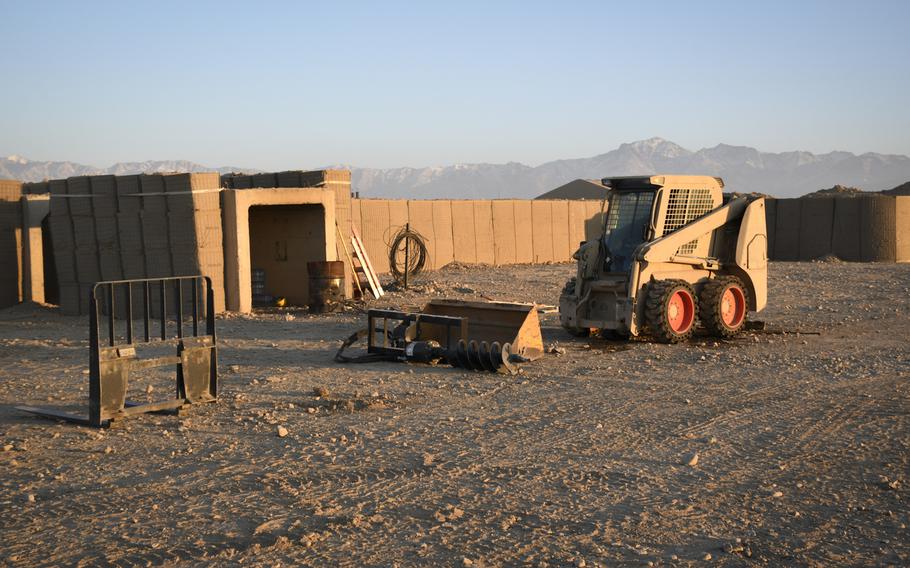 Buy Photo
Engineers at Camp Dahlke West in Afghanistan clear a space for a new surveillance balloon Dec. 16, 2018 as part of a rapid expansion of the base. The base population quintupled in size and has been built up to host the 2nd Security Force Assistance Brigade in 2019. (J.p. Lawrence/Stars and Stripes) 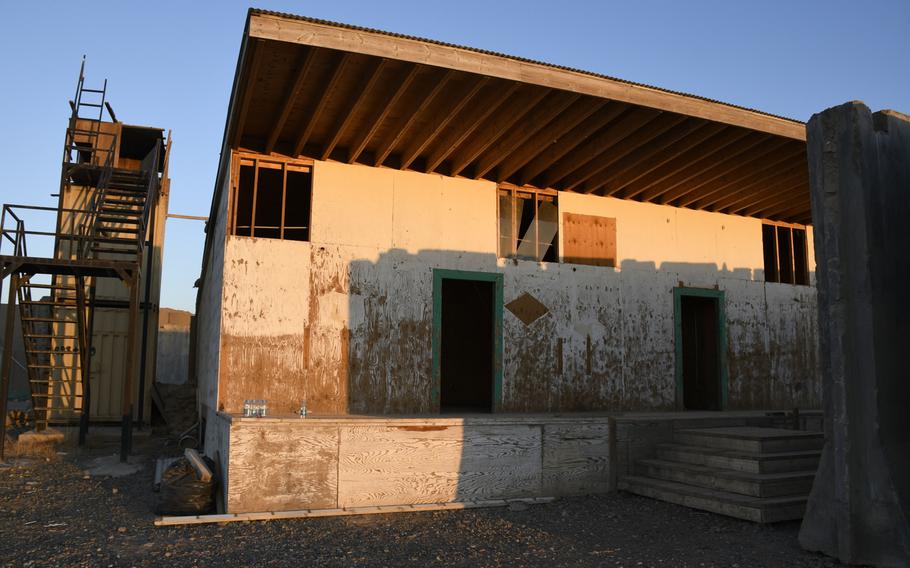 Buy Photo
This dilapidated building at Camp Dahlke West in Afghanistan will soon be renovated into an office. The base has rapidly expanded in both population and infrastructure in the last year. (J.p. Lawrence/Stars and Stripes) 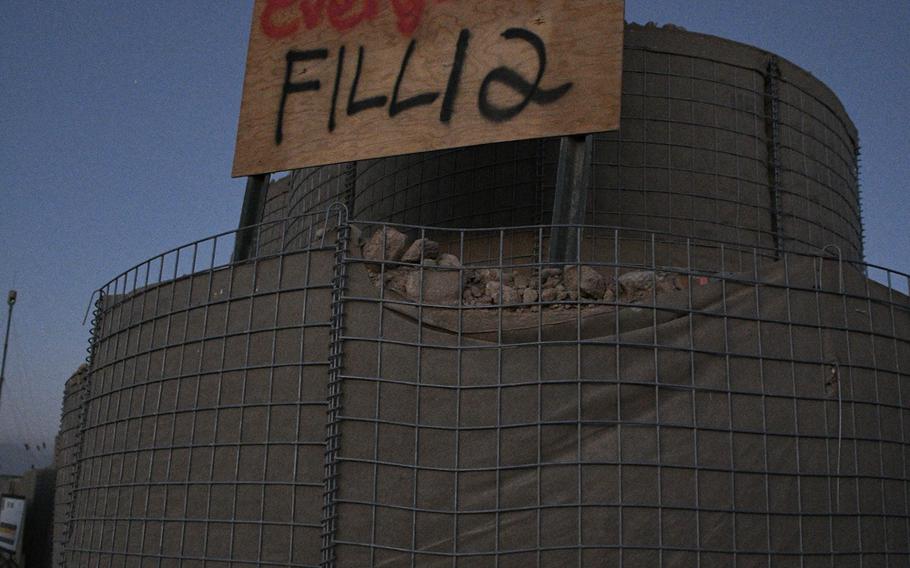 Buy Photo
Soldiers at Camp Dahlke West in Afghanistan used to have to bag one or two sandbags before receiving a meal. The base population quintupled in size in the last year and needed hundreds of protective sandbags to protect soldiers from mortars. (J.p. Lawrence/Stars and Stripes) 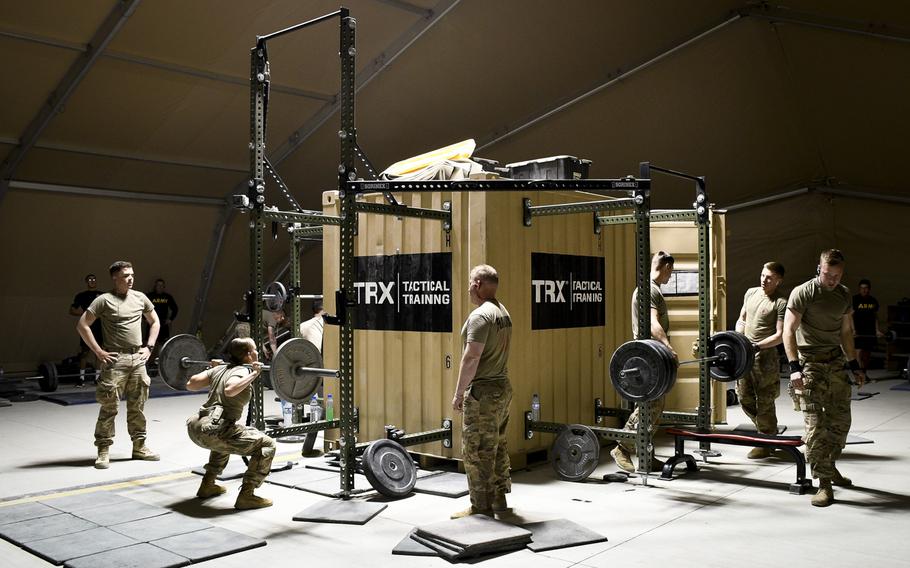 Buy Photo
Soldiers at Camp Dahlke West in Afghanistan lift weights Dec. 16, 2018 in a gym on base. The once sparse base had no gym as of April last year, and soldiers resorted to building gym equipment out of spare lumber. The new gym is part of a rapid expansion of the base to host the 1st Security Force Assistance Brigade in 2018 and the 2nd SFAB in 2019. (J.p. Lawrence/Stars and Stripes) 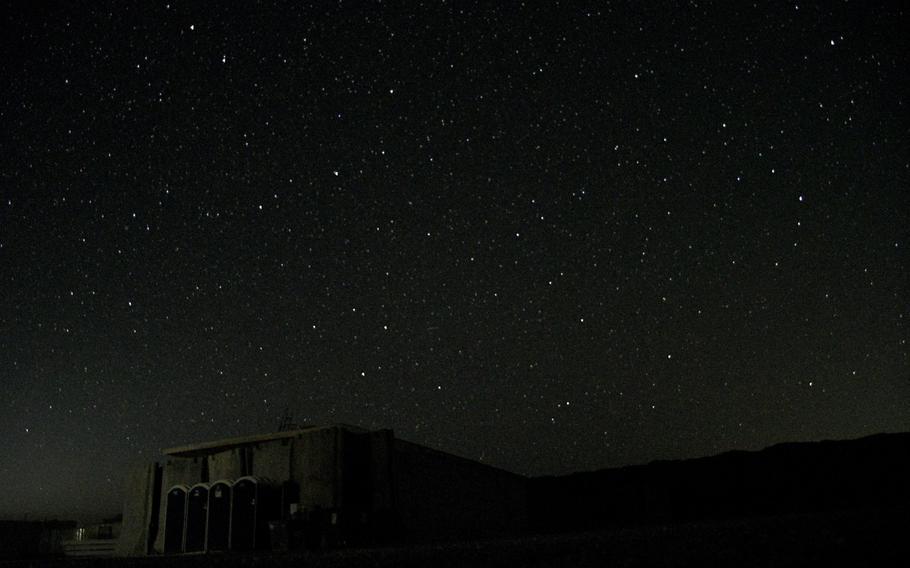 Buy Photo
Soldiers at Camp Dahlke West in Afghanistan live on a "blackout" base at night, with all lights turned off to prevent Taliban from sighting their mortars. The base continues to be a favored target for insurgents, with at least 83 rocket or mortar attacks occurring since April. (J.p. Lawrence/Stars and Stripes)

CAMP DAHLKE WEST, Afghanistan — At the entrance of the base cafeteria here is a sign stating a simple rule: if you want to eat, you’ll have to fill two sandbags.

Expansion at Camp Dahlke West, 60 miles south of Kabul, has been so fast that everyone on base has had to pitch in to keep up and keep fed.

The buildup is a visible result of the Trump administration’s strategy in Afghanistan, which called for a modest surge of troops into the country four years after the military spent billions closing bases there.

It also comes as the U.S. sends more newly created units that specialize in aiding Afghanistan’s security forces, which have sustained heavy casualties as the Taliban and other insurgents continue to launch offensives throughout the country.

Camp Dahlke West has been built almost from scratch during the past year. It’s just south of the former Forward Operating Base Shank, which was given to the Afghan military during the 2014 military drawdown.

An influx of troops in the spring brought soldiers from the 1st Security Force Assistance Brigade, a cavalry unit and dozens of contractors.

Since then, the base has quintupled in population.

The soldiers who first arrived found only a few buildings around an airstrip. Soldiers waited in line for shared work computers, slept 12 to a room and used gym equipment built from scrap lumber.

The base now is bustling, with new buildings, including offices, a chapel, a recreation room, a laundromat and a gym. Engineers are building enough housing for 800 soldiers, including for the 2nd Security Force Assistance Brigade, which will arrive next year.

“By the time the second SFAB arrives, they should be out of tents and into better housing,” said Lt. Col. Gerald Law, 50, an engineer with Area Support Group-Afghanistan, the command responsible for base support throughout the country. Law oversaw construction as garrison commander at Dahlke over the summer. The goal, he said, is to ensure soldiers are not working on construction and can focus on advising and assisting government troops.

Expanding the base was until recently a small part of each soldier’s duty each day.

“It just sucks when you’re trying to get a meal and you remember, ‘oh I have to fill a sandbag,’” recalled executive officer 1st Lt. Matthew Moher, 27, from Apache Troop, 2nd Squadron, 1st Cavalry Regiment.

The base continues to be a target of insurgents, with 83 mortar and rocket attacks since April, and sandbags provide another layer of protection for the base’s bunkers, Kopec said.

The two officers spoke at a cafeteria they helped build and furnish, over a meal of beef kebab, baked salmon, asparagus spears and strawberry cheesecake.

Moher found tables and chairs for the cafeteria, and Kopec flew all over Afghanistan in search of supplies to build up the base’s defenses.

To provide a sense of the expansion’s scale, Kopec said almost $6 million has been spent just on miles of Hesco barriers — the wire frames that are filled with sand and serve as walls. Meanwhile, trucks hauled in more than 700 sections of blast wall.

Every few weeks, some soldiers would also go to the former FOB Shank on “zombie runs,” named because of the eeriness of walking through a mostly empty base.

The soldiers carried memos to Afghans operating on a small piece of the former Shank, requesting supplies owned by the Afghans that the Americans had previously turned over.

Many of the generators now at Dahlke West belonged to the Americans, then the Afghans and then the Americans again. The housing containers being shipped in, the two soldiers noted, are in ample supply across the wire.

“There’s a village like that a hundred yards north of the wall, and no one lives there, there’s stray dogs there,” Kopec said.

“There are villages of tents just rotting away,” Moher said. “You think about how hard it is to get stuff here, and you look over the fence, and everything is right there.”

The base should be “mature” in early 2019, which means major projects will be completed and the camp will look similar to other bases in Afghanistan.

Current projects include bringing in a post exchange for soldiers to shop and building tents so fire trucks on the flight line don’t sit in the open air, where their water may freeze, said Brian Wilhelm, 56, the base’s mayor with Area Support Group-Afghanistan.

“When the guys first got here, there was nothing,” Wilhelm said. “The buildup so far has been incredible.”