An Arab mayor in a majority Kurdish city 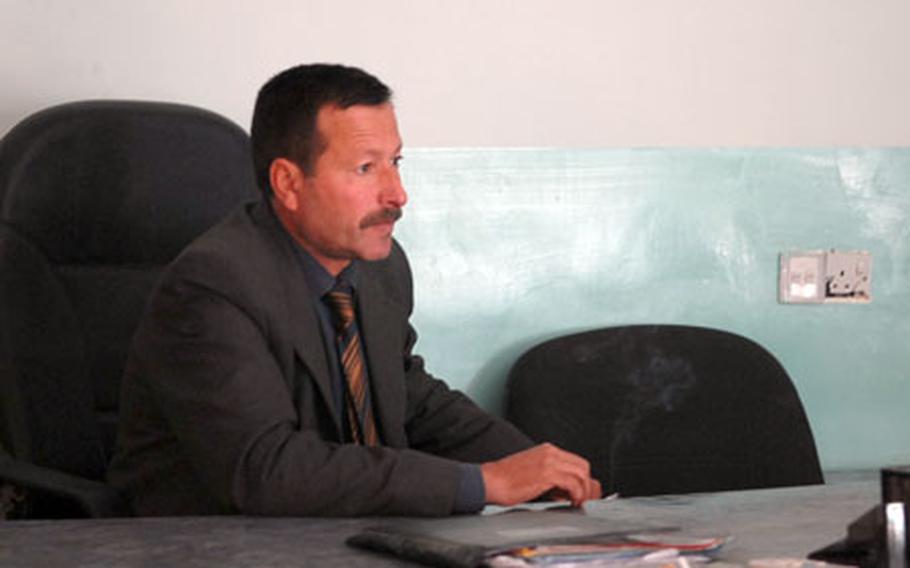 Mayor Mohamed Moshen Ali sits in his office in the city of Zaab on Feb. 22. (Zeke Minaya / S&S)

ZAAB, Iraq &#8212; The mayor of this small town tucked in the southwestern corner of Kirkuk province is a rarity. Mohamed Moshen Ali is an Arab leader willing to work with the Kurd-led provincial government.

But he says his reconciliatory message has fallen mostly on deaf ears. Many Arabs are leaving the disputed region of the provincial seat &#8212; the city of Kirkuk &#8212; and those who have stayed for the most part keep their backs turned to the Kurdish leadership, he said.

&#8220;We have more and more (Arab) people leaving Kirkuk. They are taking relocation money,&#8221; he said, referring to a government-sponsored grant offered as an incentive for Arabs to leave the area. &#8220;We need Kirkuk to be for everybody, not just Kurds.&#8221;

Though much less violent than the southern territories, the relative calm in the north is fragile. According to the Iraqi constitution, a referendum on the fate of the city of Kirkuk is scheduled for later this year, when voters will decide whether the area &#8212; home to 40 percent of Iraq&#8217;s vast oil reserves &#8212; will join the autonomous Kurdistan government or remain tied to Baghdad and the rest of Iraq.

With that decision as the backdrop, the recriminations and posturing have begun in earnest in the provincial halls of governance, with American forces cast in the role of mediator.

&#8220;There&#8217;s nothing wrong with being a referee, as long as we are getting people to talk to each other,&#8221; said Lt. Col. Drew Meyerowich, commander of the 2nd Battalion, 27th Infantry Regiment, which is based at Forward Operating Base McHenry and oversees security in southwest Kirkuk province.

Moshen has been one of the few to embrace the U.S. military&#8217;s message of increased dialogue, but a lingering boycott by Arab leaders of the provincial government threatens to eliminate what little voice the marginalized ethnic group has in Kirkuk, U.S. military officials said.

Arabs officially hold six seats on the 41-member provincial council, but lately, they have had even less representation.

Arabs and Turkmen &#8212; another significant minority ethnic group in Kirkuk with nine council seats &#8212; have boycotted the council, according to Moshen and U.S. military officials. Moshen is not a member of the provincial council, which is dominated by Kurds, who hold 26 seats.

He has, however, spoken up during the weekly meeting of Arab provincial leaders and pushed for keeping Kirkuk part of the rest of the country.

Arabs have been offered thousands of dollars by the government in Baghdad and provincial heads to pick up stakes.

Leaders are seeking to &#8220;normalize&#8221; Kirkuk by attempting to reverse the deep demographic changes forced on the area when Saddam Hussein removed hundreds of thousands of Kurds in the 1970s. Saddam then encouraged Arabs to move into Kirkuk to strengthen his hand.

Earlier this month, Arabs were further angered when, from Baghdad, the Iraqi Higher Committee for the Normalization of Kirkuk decided that ethnic groups who had moved into the disputed area after Saddam Hussein came to power would be returned to their original towns.

After the U.S.-led invasion, hundreds of thousands of Kurds returned in hopes of reclaiming property that had been in the hands of Arabs for a generation. There are no reliable estimates of the present demographic breakdown in Kirkuk. But there are plans for a census this summer.

To be sure, experts point to Kirkuk and the coming vote as being potentially as explosive as the sectarian violence in Baghdad. A report earlier this year by the Washington Institute for Near East Policy found that &#8220;Kirkuk is as likely as Baghdad to produce a calamity that can fracture Iraq.&#8221; The group recommended the coming vote be postponed.

Moshen, however, feels the vote should go on as planned, before more Arabs are driven out. If Arabs are not lured out by money, they are driven out by fear and he said a campaign of misinformation is running rampant through Arab towns and villages, scaring would-be voters.