An American tradition on Italy’s roads 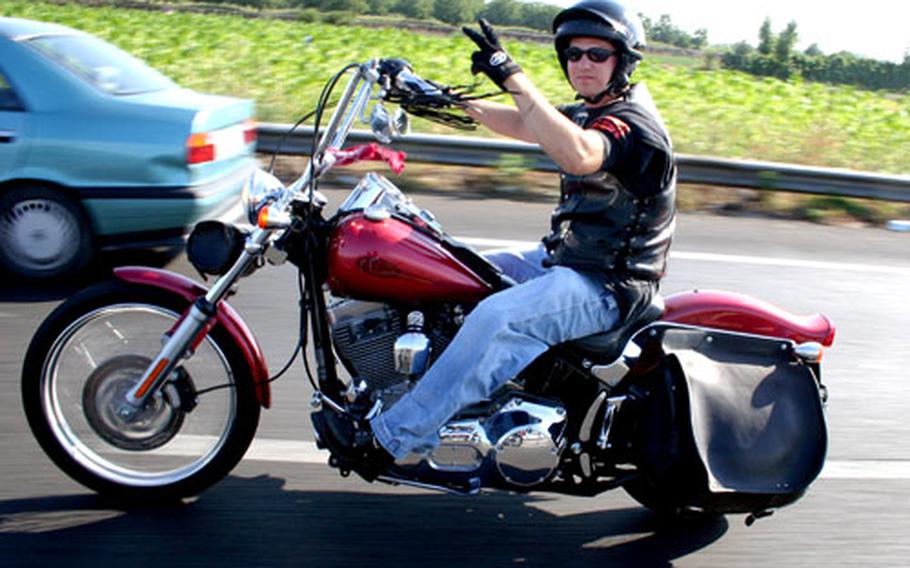 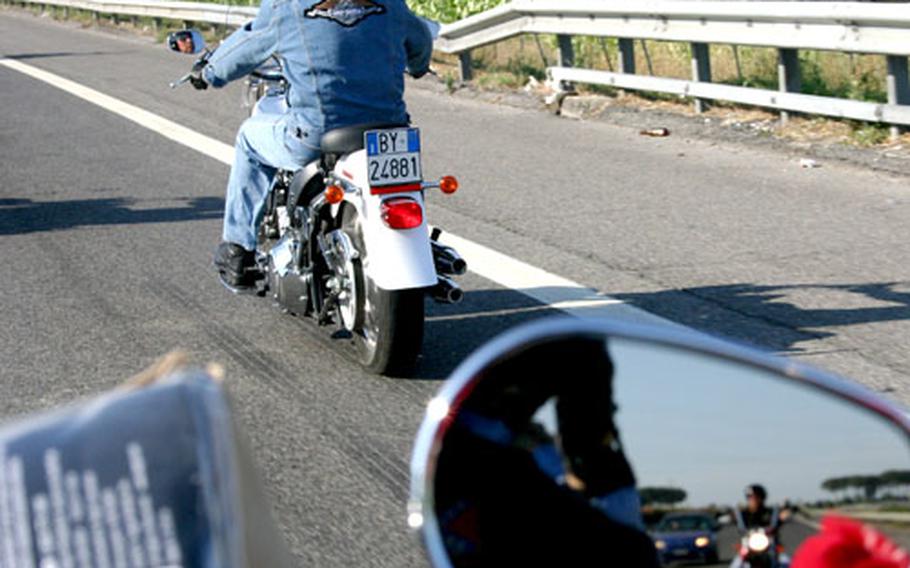 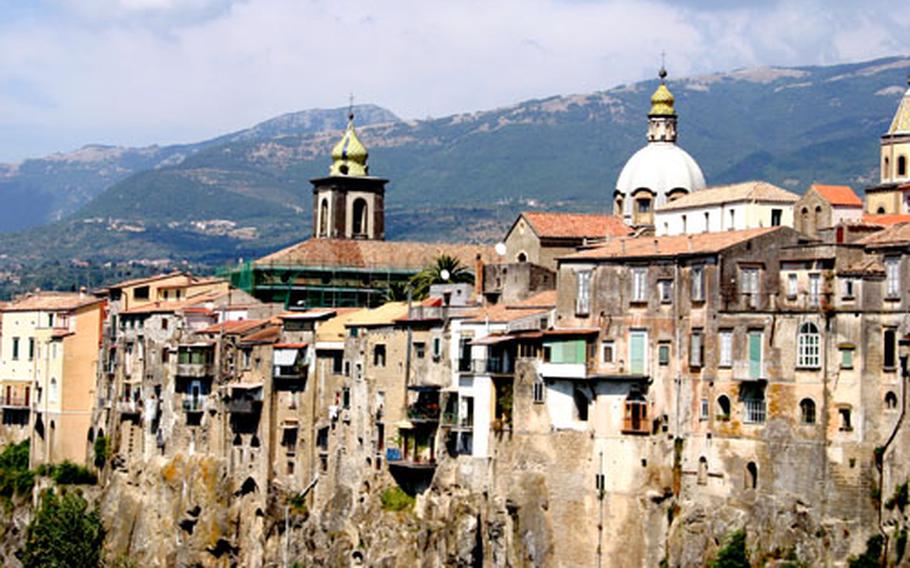 One of the many small, mountainside villages and towns seen along the highways and back roads in the Campania region of southern Italy. (Sandra Jontz / S&S) 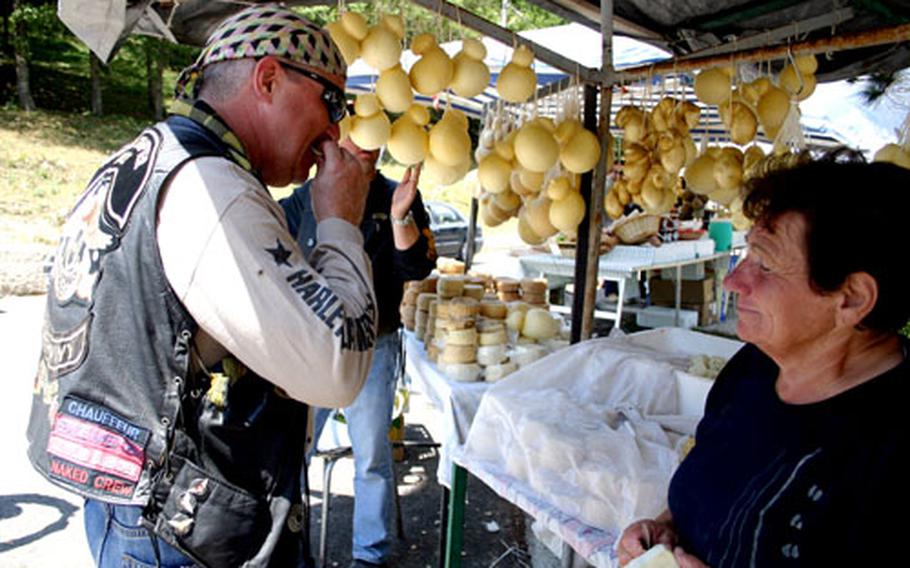 Michael “Gator” Reed, 48, samples some cheese during a brief stop in one of a half-dozen towns bikers drove through after the rally. (Sandra Jontz / S&S)

CIORLANO, Italy &#8212; The cacophony of the open throttle, rock &#8217;n&#8217; roll music, and the wind beating against the helmet died to a whisper for a split second, as if pausing to take in a deep breath.

It was as if some kind of force knew what lie up ahead.

Then, as the &#8217;99 Harley-Davidson Electra Glide Classic rounded a bend in the two-lane, gray ribbon of roadway that snakes along the Monti del Matese, a shimmering lake came into view.

And that&#8217;s when the phenomenon and hot tears hit me: Sometimes it&#8217;s amazingly wonderful to be alive.

It is a notion deeply embedded in the personalities of bikers &#8212; who, pardon the clich&#233;, really do live to ride and ride to live.

&#8220;You&#8217;re not looking through a windshield; smells aren&#8217;t filtered by the air conditioner. You smell the fresh-cut grass, smell the farmers burning their fields, smell flowers in the springtime, the trees or bushes that are in bloom.

&#8220;In the mountains, you feel the crisp, fresh air of a spring morning. It&#8217;s something you cannot experience sitting in car, even with the windows down. No way.

&#8220;You smell the rain before it comes, then you&#8217;re in the rain, and so what? You slow down, drive safely and enjoy a nice summer shower. Who cares?

&#8220;You see a rainbow before everyone else. At night, you feel the coolness; smell the damp of the earth. As you go over a river, you smell it. As you ride by the sea, you smell the salt.&#8221;

Thousands of miles and the entire Atlantic Ocean didn&#8217;t douse the American bikers&#8217; passions for an open road and a slice of Americana in Italy.

If they didn&#8217;t ship their bikes to Europe, there&#8217;s no difficulty finding a Harley-Davidson dealership in Italy. Shops pepper this Mediterranean country, which seems to gravitate toward many things American &#8212; McDonald&#8217;s restaurants, Ford cars, even Budweiser beer.

&#8220;Don&#8217;t be so surprised. Italians love Harley-Davidson, like Americans love Ferrari,&#8221; Campolotteno said, a grin spreading across his tanned face.

On July 23, roughly 50 American and Italian bikers congregated for the 2nd Annual &#8220;Harley-Davidson Showtime&#8221; rally, hosted on a soccer field at the foothills of the ancient mountain village of Ciorlano. In Ciorlano, some residents&#8217; passion for the modern runs as deep as the town&#8217;s ancient history &#8212; traced to 890 A.D., said Enzo Falco, president of the Proloco Ciorlanese Association, which promotes tourism and business for the village of 560 residents.

But it doesn&#8217;t matter if they ride a Harley or a Suzuki, a BMW, a Honda or any other make of motorcycle, riders said.

&#8220;There&#8217;s something amazing about the scenery; the castles, the ruins, things that have been around for thousands and thousands of years,&#8221; he said.

Rarely, if ever, will one hear bikers call each other by their birth names. Their &#8220;rider names&#8221; are bestowed by other riders, and chosen for any number of reasons: a personality trait, a stupid act once committed, one&#8217;s birthplace.

Gator hails from Louisiana, and has the image of the reptile emblazoned on his Electra Glide (he even has a gator kickstand.)