An American dream for local translators 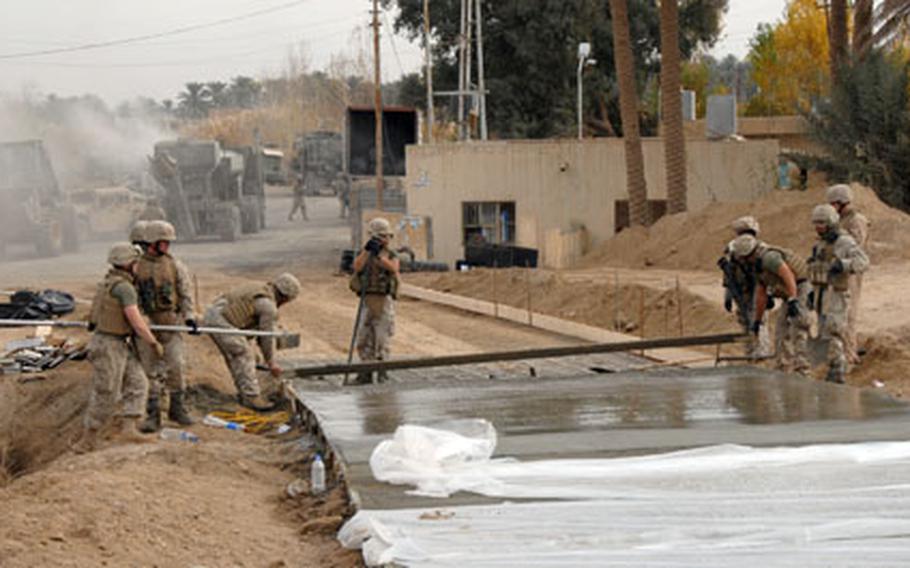 During a 9th Engineer Support Battalion project near Fallujah in December, "Sam" was the unit&#39;s translator at the worksite. Lt. Col. Mark Menotti, commanding officer of the 9th ESB, said Sam is "insightful on the job site" and "mitigates problems with the locals." (Megan McCloskey / S&S)

After three years of working with the U.S.-led coalition, &#8220;Sam,&#8221; an Iraqi translator for the 9th Engineer Support Battalion, has adopted the mannerisms of a typical young Marine.

Now, he wants to be one.

The 25-year-old is hoping to immigrate to the United States, enlist in the Marine Corps, become an American citizen, and then join the officer ranks.

A recent policy that affords a small number of Iraqi and Afghan translators special resident status might just give him the chance.

The dream, Sam said, took hold when he was a child.

He said he became fascinated with the U.S. military when it trained the Jordanian army in the 1980s. He searched out newspapers from Jordan and Saudi Arabia to read about American servicemembers, and he fantasized about being one of them.

Despite being drawn to military life, Sam didn&#8217;t want to join Saddam&#8217;s army. But the U.S.-led invasion of Iraq presented a different opportunity.

With a civil engineering degree, he began working as a translator for the U.S. military.

He hit up the 9th ESB&#8217;s commander to get the immigration paperwork started for him as soon as the unit came to Camp Taqaddum in August.

Sam seems in awe of the U.S. military, the Marines especially.

In turn, Sam is their cheerleader with the local community.

Menotti, who calls Sam trustworthy and insightful, recommended him for the special immigration status. The package was approved by Menotti&#8217;s boss and now rests with a general.

&#8220;Sam is a bright guy with an even temperament, someone who mitigates problems with the locals,&#8221; Menotti said.

Sam insists that before hanging around the military he rarely cursed, a new habit that gets him chided by a fellow translator.

He laughs at how, when he started, he thought he had a good grasp on English, but was constantly saying &#8220;What?&#8221; to the military slang.

Asked how he pictures the United States, Sam responded without hesitation.

A little-known immigration policy enacted last year gives Iraqi and Afghan translators working for the U.S. military an opportunity to live in America. But the number afforded the chance is small &#8212; no more than 50 each year.

The new immigration category, created by the National Defense Authorization Act for fiscal 2006, &#8220;allows translators and their families to gain admission to the United States, apply for permanent residency and eventually acquire U.S. citizenship,&#8221; according to the Department of Homeland Security Web site.

They need to have worked for the U.S. military for at least a year and have a recommendation from a general or flag officer.

&#8220;Henry,&#8221; a former human- rights activist who is now a translator with the 9th Engineer Support Battalion, is hoping to be one of those select few. He&#8217;s desperate to get his wife and three daughters out of Iraq.

Henry, whose real name can&#8217;t be used, is like many people who want to immigrate to the States &#8212; he wants a better life for his family.

But he, like the other translators, stands out in the vast pool of potential immigrants. Henry has spent the last year of his life helping Americans in the Iraqi war effort.

Translators leave family behind to live with military units. Henry didn&#8217;t bring any photos of his wife or daughters, to prevent insurgents from finding them should he be captured.

The translators get one week of vacation for every three months of work.

Both say they&#8217;re proud of their work with the U.S. military and consider the 9th ESB family.

An unassuming, gracious man who is quick to offer tea, Henry was shy about asking the 9th ESB&#8217;s commander for help with an immigration package. It took him a couple of months, even with Lt. Col. Mark Menotti&#8217;s encouragement.

The 36-year-old is a little weary of the process to gain admission to the United States.