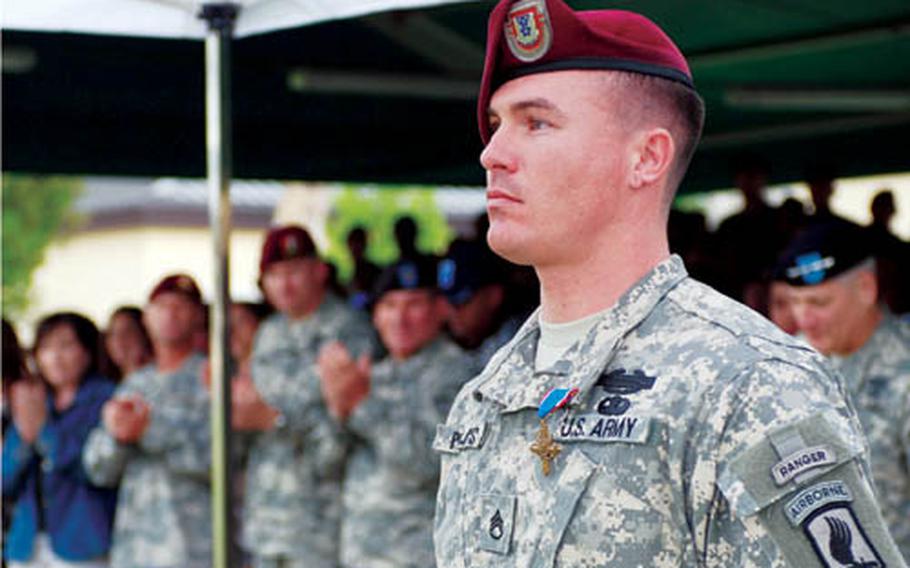 Phillips, on his fourth deployment to Southwest Asia, had already figured that out.

It was about 5 a.m. and enemy forces were trying to overrun the platoon-size element stationed at the Ranch House, a rudimentary outpost built on a mountain side 7,000 feet above sea level in Nuristan province, Afghanistan.

"That was exactly their intention," Phillips said Monday. "We didn&#8217;t allow them. We fought hard."

Phillips not only fought hard, he was instrumental in keeping one of the perimeter posts from falling into enemy hands, stopping the enemy advance. His actions that day earned him the Distinguished Service Cross, pinned on Monday by Gen. Carter Ham, commander of U.S. Army Europe.

Two dozen U.S. soldiers from 2nd Battalion, 503rd Infantry Regiment fought off a force estimated at about three times their strength that day. Half of the U.S. soldiers were wounded and parts of the compound were breached. But, with the help of A-10 Warthogs, they held out long enough for more air support to arrive and force the enemy to abandon their attack.

Phillips said Monday that all the U.S. soldiers involved in the battle deserved recognition. That&#8217;s something his company commander, Capt. Matthew Myer, would expect him to say.

That job changed several times during the attack. Phillips initially directed fire from the mortar pit, then led its defense &#8212; holding off more than a dozen insurgents who had breached the perimeter with a combination of small-arms fire and grenades. Then he and Sgt. Kyle Dirkinitis, a medic, rushed out to defend an isolated guard post. Phillips halted another enemy advance with more grenades and fire. Dirkinitis &#8212; who would eventually receive the Bronze Star with "V" device &#8212; was then wounded in the chest. Phillips dragged him to safety and directed another soldier to treat his injury while rejoining the fight. Strafing runs by the A-10 and machine-gun and mortar fire by the Chosen Company soldiers forced the enemy to abandon their positions. Phillips then led a team that retook part of the perimeter. He then dragged another wounded soldier from a destroyed guard tower and directed the evacuation of wounded personnel.

Phillips would go on to fight in two more battles that involved elements from his company &#8212; an ambush near Aranus on Nov. 9 that killed five soldiers and a July 13 attack in Wanat that resulted in nine more U.S. deaths.

The 24-year-old from Eastpoint, Fla., said he&#8217;ll soon be leaving the brigade to head back to the States and join the Rangers, where he&#8217;ll be an instructor.