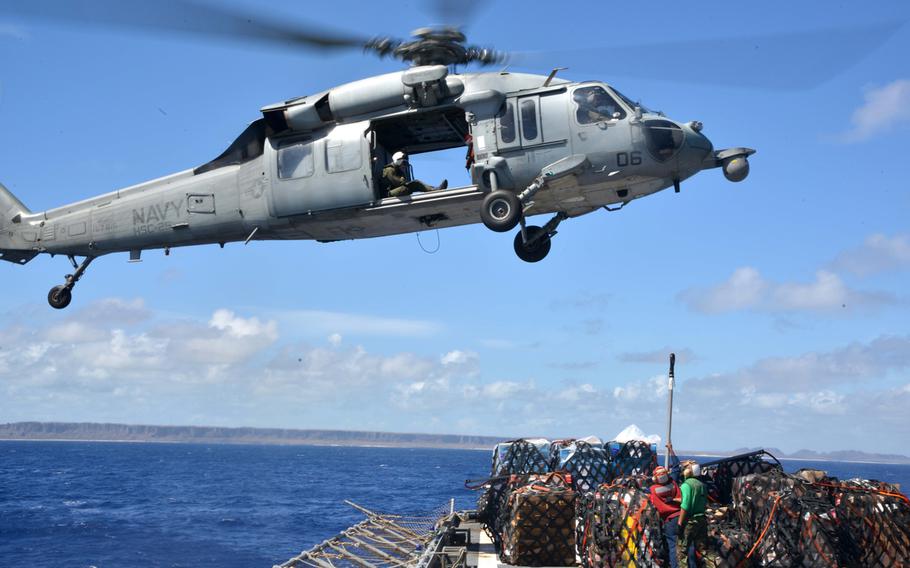 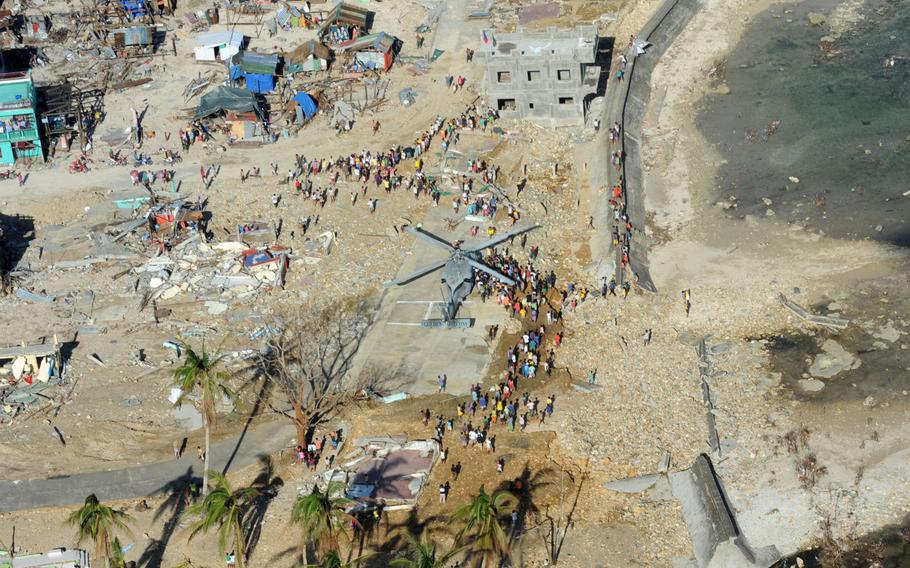 Philippine citizens gather around a MH-60S Seahawk from the "Golden Falcons" of Helicopter Sea Combat Squadron (HSC) 12 as it delivers relief supplies in support of Operation Damayan. The George Washington Strike Group supports the 3d Marine Expeditionary Brigade to assist the Philippine government in response to the aftermath of Super Typhoon Haiyan/Yolanda in the Republic of the Philippines. (Peter Burghart/U.S. Navy)

SEOUL — The USS George Washington will likely leave the Philippines in about three days, after the arrival of two amphibious ships that are better equipped to deal with a disaster such as Typhoon Haiyan, Navy officials said Monday.

While smaller than the aircraft carrier that arrived last Thursday, the USS Ashland and the USS Germantown can move closer to affected areas and provide better helicopter support, according to 7th Fleet spokesman Cmdr. William Marks.

The two ships, expected to arrive Wednesday, are transporting about 900 Marines from Okinawa.

A third ship, the USS Freedom, with one helicopter aboard, is underway from Singapore to deliver supplies in support of Operation Damayan.

Philippine President Benigno Aquino has met with U.S. sailors to thank them for their relief efforts at Guiuan, a small city in Eastern Samar province that is the focus of about half of the 7th Fleet’s disaster relief efforts. The city is acting as a hub for helicopters moving aid to more far-flung areas.

Another 35 percent of the fleet’s mission involves flying relief supplies via helicopter to areas along the rim of Leyte Gulf, south of the provincial capital Tacloban, which was devastated by a storm surge when the typhoon came ashore Nov. 8.

The remainder of the Navy’s relief efforts are focused on Ormoc, a city in Leyte province that is seeing “a lot of progress,” Marks said.

With wind gusts of up to 235 mph and landfall waves 50 feet high, one of the most powerful storms on record has affected more than 4.2 million people in 36 provinces.

As of Monday morning, the 7th Fleet sailors had recovered 519 typhoon survivors and transported them to facilities offering aid and medical care. They also had distributed more than 368,800 liters of water and 160,000 pounds of food and dry goods using 24 helicopters. The fleet has logged nearly 500 flight hours in support of Operation Damayan.

Meanwhile, a team of about 80 airmen from Yokota Air Base and three C-130 Hercules aircraft arrived at Clark Air Base on Saturday to provide airlift support, according to a 374th Airlift Wing statement. The team was returning to Japan from a humanitarian assistance and disaster relief exercise in Bangladesh when orders came to go to the Philippines.

“This is exactly the kind of mission we train for,” said Lt Col. Jeff Menasco, 36th Airlift Squadron commander. “We can provide versatile humanitarian airlift operations in some of the most austere locations within hours of a mission tasking.”

Five C-130s and 90 Yokota personnel are expected to participate in the recovery efforts.