Amphibious group, MEU may deploy to South Pacific in 2019 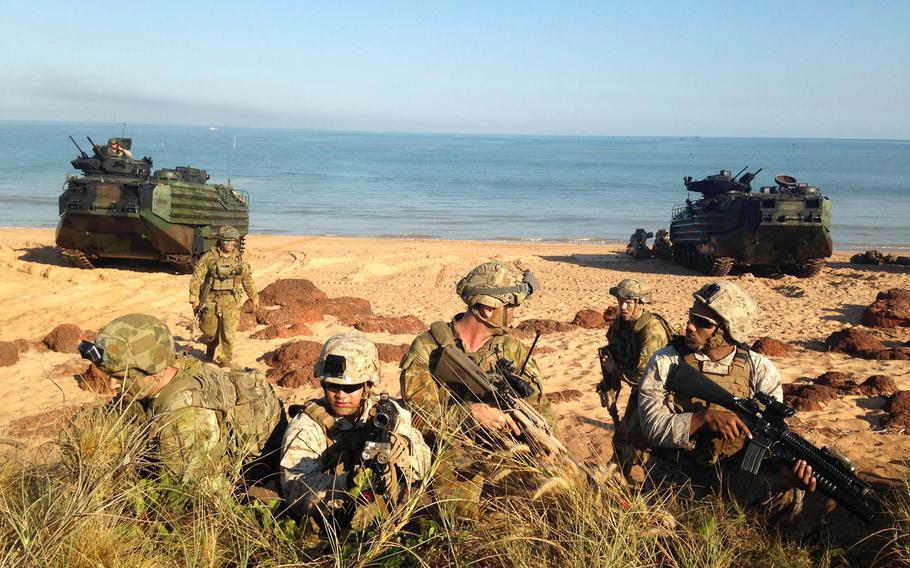 The Navy and Marine Corps expect to deploy a second Amphibious Ready Group and Marine Expeditionary Unit team to the South Pacific in 2019, a Marine general said Wednesday.

The strategy is intended to create a greater presence near the southern end of the South China Sea, said Lt. Gen. John Wissler, commander of Marine Corps Forces Command, during a discussion about amphibious capabilities at the Center for Strategic and International Studies in Washington, D.C.

The 31st Marine Expeditionary Unit, based in Okinawa, Japan, conducts patrols and exercises throughout the Pacific, and routinely responds to natural disasters. A South Pacific-based MEU would allow the Okinawa unit to focus on the northern part of the region.

China has increased its naval presence in that area to shore up its sovereignty claims over disputed features in the Spratly Islands near the Philippines.

“So not only will you have a forward-deployed naval force with forward ships that are home-ported in Japan, but you will have additional amphibious capability on multiple 90-day patrols in and around the Asia-Pacific,” Wissler said according to media reports.

The U.S. has at the same time been increasing its naval presence in the South China Sea, conducting so-called freedom-of-navigation patrols near the islands China has created by dredging sand.

Wissler described America’s global amphibious forces as “severely under-resourced,” and maintenance requirements prevent all the forward-deployed amphibious ships from being underway at all times.

“That’s not because the Navy doesn’t want to, it’s simply a physics problem, if you will,” he said.

Wissler’s appearance was part of the release Wednesday of CSIS’s report, “Land Together: Pacific Amphibious Development and Implications for the U.S. Fleet.” The report recommends increased funding for U.S. Pacific Command to create a Special Purpose Marine Air-Ground Task Force of the type already used in Africa.

Such a task force would serve as a small self-deploying force that could meet up with larger vessels for small-scale crisis response and for small-unit amphibious force training, the report said.

Also recommended were a pilot program to test the viability of using Army-owned logistics support vessels as an alternative platform in the Pacific and a change of home-porting of two Maritime Prepositioning Force vessels stationed in Guam to ports in Southeast Asia.