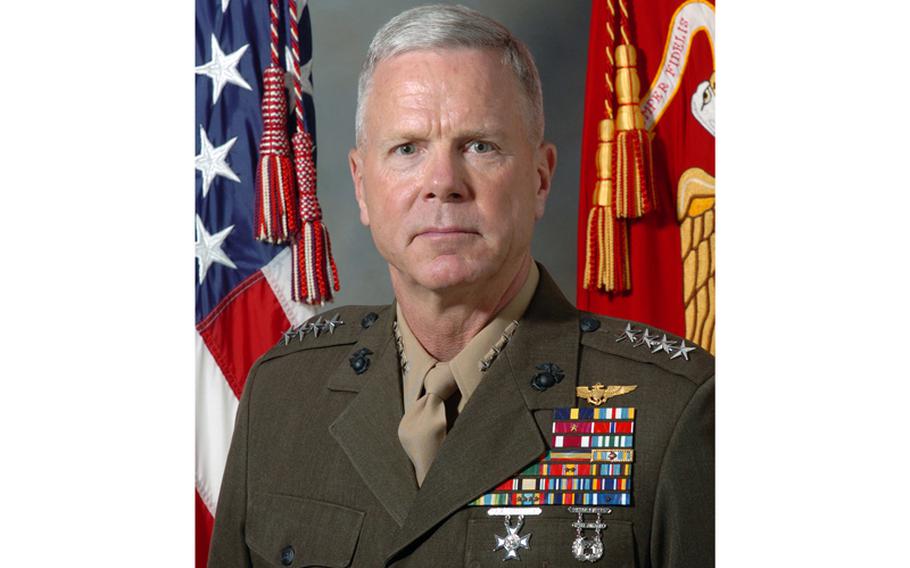 But when question time came during a packed town hall with hundreds of Marines, Amos heard what was foremost on their minds.

What should closeted gay and lesbian Marines do amid the confusing on again, off again efforts to repeal &ldquo;don&rsquo;t ask, don&rsquo;t tell&rdquo;?

Marines should keep quiet while the law was in effect, said Amos, who explained he opposed repeal during a war tempo that has 60,000 Marines coming and going from Afghanistan.

&ldquo;I worry about the distraction because I don&rsquo;t want Marines to have to worry about: What does this mean for me with a roommate?&rdquo; Amos said, taking an identical position to that of previous commandant Gen. James Conway.

Conway this summer said he felt the Marine Corps recruited &ldquo;pretty macho&rdquo; Americans, setting them apart from the other services in their opposition to openly gay service.

Amos said he has seen the results of the Pentagon&rsquo;s survey of troops and families.

&ldquo;There&rsquo;s expectations when Marines, when they come in: they join us, we don&rsquo;t join them,&rdquo; he added, drawing a few quiet oohrahs and claps.

Another Marine asked what Amos will do to alleviate a two-year waiting list for day care on and off base?

The issue discussed recently in congressional hearings, said Amos and Sgt. Major of the Marine Corps Carlton Kent, and the Marines are buidling 10 new day care centers across the force. But an official in the audience did not offer any new immediate relief for parents.

And can a Marine fight in mixed martial arts competitions?

Kent said the Defense Department has to assure those bouts are legally sanctioned. He said he&rsquo;s aware that Marines are taking to underground fighting contests, but the readiness of the force, not an individual&rsquo;s desire to compete, comes first.

Amos also revealed the detailed process behind crafting his planning guidance issued last week, a broad-stroked to-do list laying out the potential global threats to which he feels the Corps will be asked to respond.

Three months ago, Amos sent a team throughout the fleet to assess current problems and concerns, and he met with every three-star general. Amos said he also drew on his experiences flying across the country, talking to think tanks, foreign governments and militaries to conclude that future threats will emerge from coastal cities in the developing world.

&ldquo;Based on the evidence that I read and study, this is where the Marine Corps is going to operate when we come out of Afghanistan,&rdquo; Amos said.

Amos said his team spent days settling on the term &ldquo;middleweight&rdquo; for the Marine Corps. He rejected options like &ldquo;general purpose,&rdquo; which he said sounded &ldquo;like a sack of flour.&rdquo; Heavyweight sounded too fat and lightweight too fluffy.

One priority will be to better integrate Marine Corps special operations into the regular force.

Touching on a wide range of issues, Amos said he intends to lighten every aspect of the Corps, citing &ldquo;30-ton MRAPs&rdquo; and too-heavy field gear.

Amos is directing the Marines to begin offering more than one &ldquo;captain&rsquo;s course&rdquo; per year, fighting through concerns of cost, force strain, and dwell time with families.

The service is not diverse enough demographically to reflect American society. And the force has failed to provide adequate transition assistance for Marines leaving the service.

An ongoing force structure review of every unit, base and facet of the Corps is due to report to the commandant next month with recommendations on some of these concerns. Amos will pass it up to Navy leadership in January.