Among many Afghans, 9/11 remains unfamiliar or poorly understood 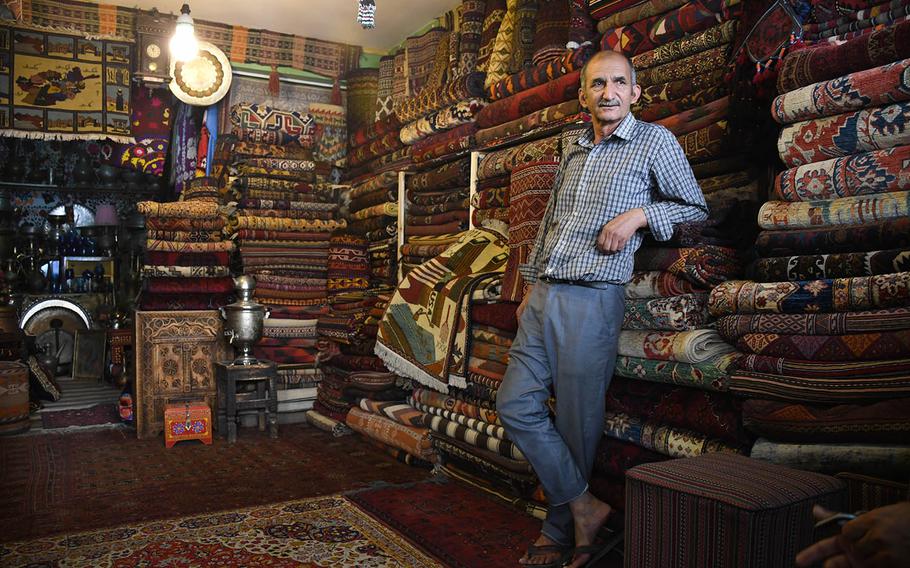 Buy Photo
Sayed Jafar, a carpet salesman in Kabul, sells rugs commemorating the attacks of Sept. 11, 2001. As Americans commemorate 9/11, many Afghans either don't know much about it or do not believe the attack happened. (J.p. Lawrence / Stars and Stripes)

KABUL, Afghanistan — Behind blast walls, soldiers at the Resolute Support headquarters in Kabul commemorated the 17th anniversary of 9/11 on Tuesday.

Beyond the walls, several Afghans interviewed across the country told Stars and Stripes they either didn’t know why the private memorial was taking place or didn’t believe the terror attacks happened the way they did.

Other Afghans questioned how the attacks were connected to the ongoing U.S. and NATO presence in their country.

Ignorance of 9/11 and the rationale for U.S. intervention indicate that the United States and NATO have failed to communicate with Afghans about their mission here, experts say. That failure ultimately undermines support for the fight against the insurgents and terrorist groups.

“The vast majority of Afghans generally have no concrete, explicit reason as to why we have been in the country for 17 years,” said Thomas Johnson, a professor at the Naval Postgraduate School in Monterey, Calif.

Sami Yousafzai, 44, a journalist, was one of many Afghans living in a refugee camp in Pakistan on Sept. 11, 2001, when al-Qaida terrorists hijacked planes and crashed into the World Trade Center in New York, the Pentagon and a field in Pennsylvania. He agreed with Johnson about Afghan ignorance of the event.

“The majority of Afghans, they know very little about 9/11,” he said.

Very few Afghans at the camp had TVs in 2001, but a shop next door had a 14-inch, Russian-made black-and-white model. A friend called Yousafzai over and told him someone had attacked some buildings in America.

Yousafzai arrived in time to watch the second of two planes hit the World Trade Center. He said he knew his life and the destiny of Afghanistan was about to change. He knew that his country would be targeted for harboring al-Qaida and its leader, Osama bin Laden. He knew the U.S. was angry.

Not everyone was worried. Some Afghans were happy the U.S. had been targeted, viewing the attacks as God’s punishment for supporting Israel, Yousafzai said.

Others said they were so used to attacks and bombings during their country’s decades of war that they didn’t think 9/11 would be a big deal. Still others had not heard about the attacks at all and were confused when U.S. and NATO soldiers arrived in their country.

Conspiracies and unfamiliarity Mir Alam, a Tajik farmer in rural northern Badakhshan province, did not know about 9/11 until his son told him a reporter wanted to ask him about it Monday. The news never came to him on his farm, said Alam, 51, who has never used a TV and barely listens to the radio.

“I really don’t know what 9/11 is,” Alam said Monday. “I don’t know anything about what happened that day.”

When the Americans arrived, Alam said, he assumed they came for the same reasons the Russians had in 1979: to conquer the country. This view was echoed by Ghulam Ali, 41, a Pashtun tribal leader in eastern Kunar province, who said he saw American convoys passing his village for half a decade before he found out why.

Afghanistan has one of the lowest literacy rates in the world, with news spread mostly through word of mouth. This often means the Taliban control the flow of news in its territory through propaganda techniques such as poems. During the height of fighting in Helmand and Kandahar, 92 percent of Afghan males there had never heard of 9/11, according to a 2011 survey by the International Council on Security and Development.

Prevalent conspiracy theories about 9/11 include the notion that the U.S. invaded for minerals or to create a Christian or Jewish state. One Afghan who spoke with Stars and Stripes claimed that no bodies had been found from the Twin Towers; a second said the plane crashes were accidents, and a third wondered why anyone would believe bin Laden would hide in a country as poor as Afghanistan.

“It was all the drama made by the U.S. — the whole world knows it,” Kabul resident Bahai Jan, 32, said. “It was a program made by the U.S. to come to Afghanistan and now the Afghans are suffering because of it.”

Grateful but skeptical Other Afghans are grateful that the legacy of 9/11 was the overthrow of the Taliban. Malika Hedayt, 26, a Hazara woman from the capital of central Bamiyan province, recalled hearing about the attacks on the radio. When American soldiers arrived, she was happy the Taliban, who persecuted the Hazara minority, would no longer be in power.

As the years went on, however, optimism the U.S. would bring peace faded.

Rahmatullah Yarmal, 26, is governor of southern Zabul province. When he saw American troops arrive in his country as a child, he said he understood why they came but believed they were making a mistake.

“When they saw this terrorism on 9/11, they didn’t want others in the world to suffer the same, that’s why the U.S. decided to come to Afghanistan,” he said. “But I think their choice was not the right one. They should have gone to Pakistan to eliminate terrorism.”

Lal Ziyarmal, a lawyer from Helmand province, was more pointed when asked about 9/11: “How these towers are connected to U.S. troops being here even 17 years later?”

An insurgency continues across Afghanistan in what top U.S. generals call a stalemate. The U.S. government says the Taliban now controls or contests 44 percent of Afghanistan, but military analysts cited by The New York Times says the number is closer to 61 percent of the country. Since 2017, the Taliban have reportedly held more Afghan territory than since the initial American invasion.

“9/11 changed our destiny, but unfortunately, that destiny didn’t go well,” the Afghan journalist Yousafzai said. “Violence is still here; the Americans are losing this war. At the start we thought the Americans could be the troubleshooters for everything, but now we know that is wrong. They have a powerful military, a very rich economy, but it’s not going to work.”

While Americans mourn those killed on 9/11, Yousafzai said Afghans are thinking about their own tragedies. The first half of 2018 left 1,692 Afghan civilians dead, the deadliest period since the United Nations began tracking this data. At least 100,000 Afghans have died in the war since 2001, according to a 2014 study by Brown University’s Watson Institute.

On Monday, the Taliban were engaged in offensives in Wardak, Sar-e-Pul, Kunduz and Baghlan provinces, and the Islamic State in Afghanistan claimed responsibility for a suicide attack in Kabul that killed seven and injured 25. On Tuesday, militants bombed a protest in Nangarhar, killing at least 19 and wounded 57, according to TOLO News.

“We are engaged in our own troubles and our own every day killing,” Yousafzai said. “For Afghans, every day is 9/11.”