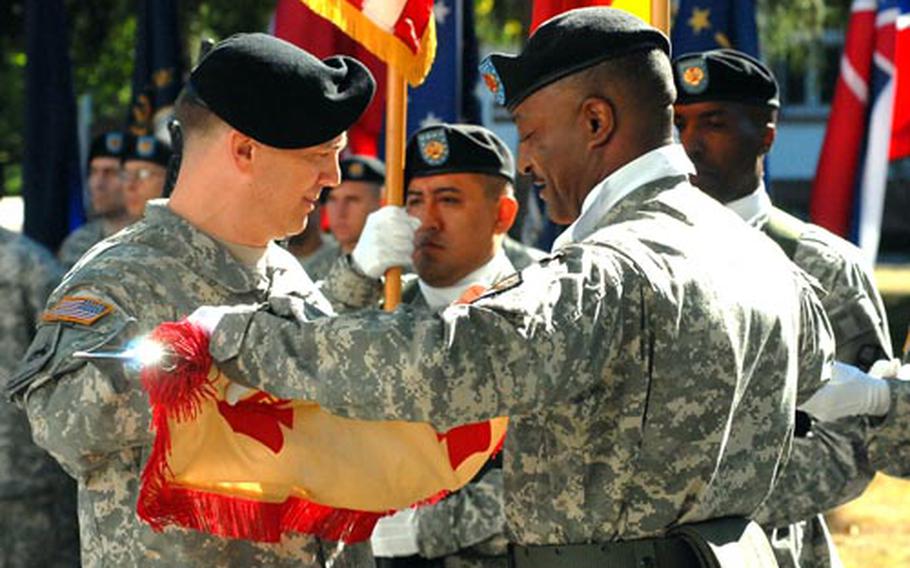 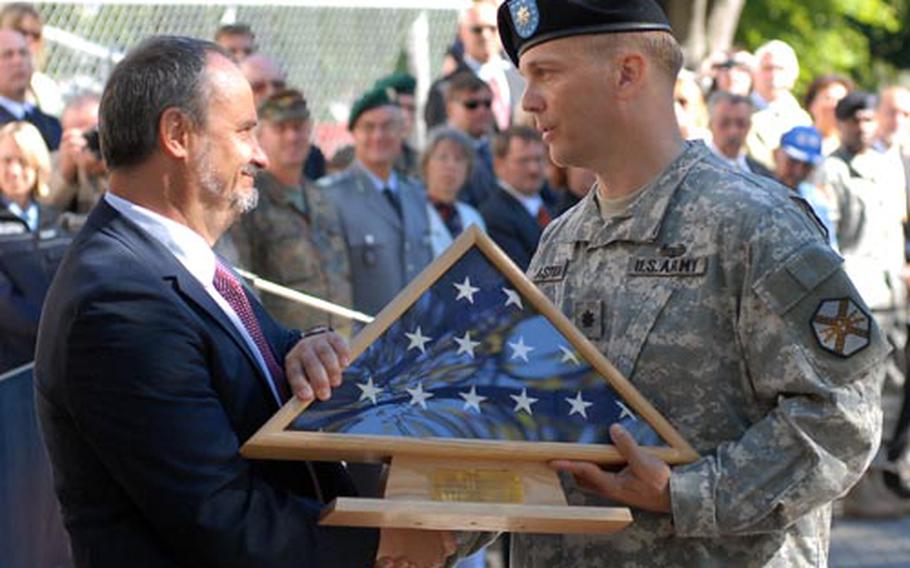 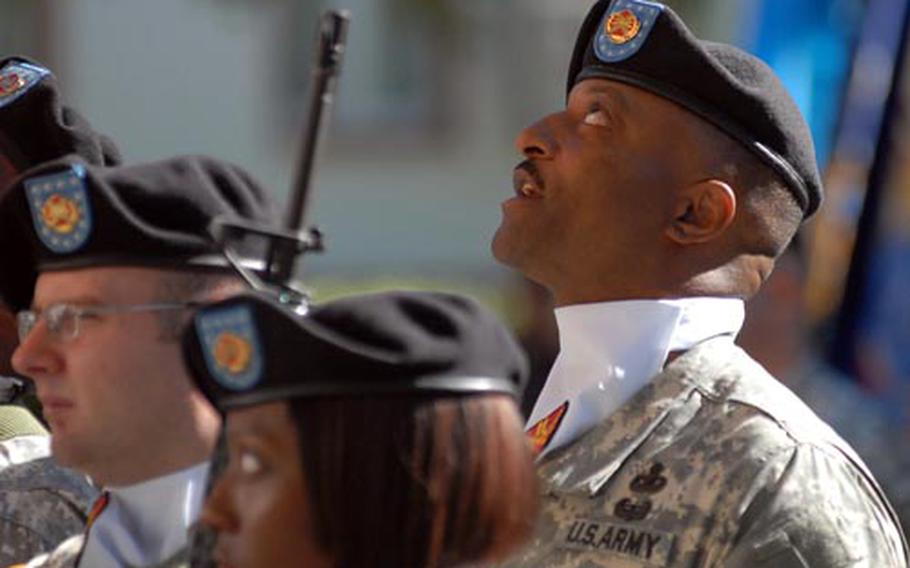 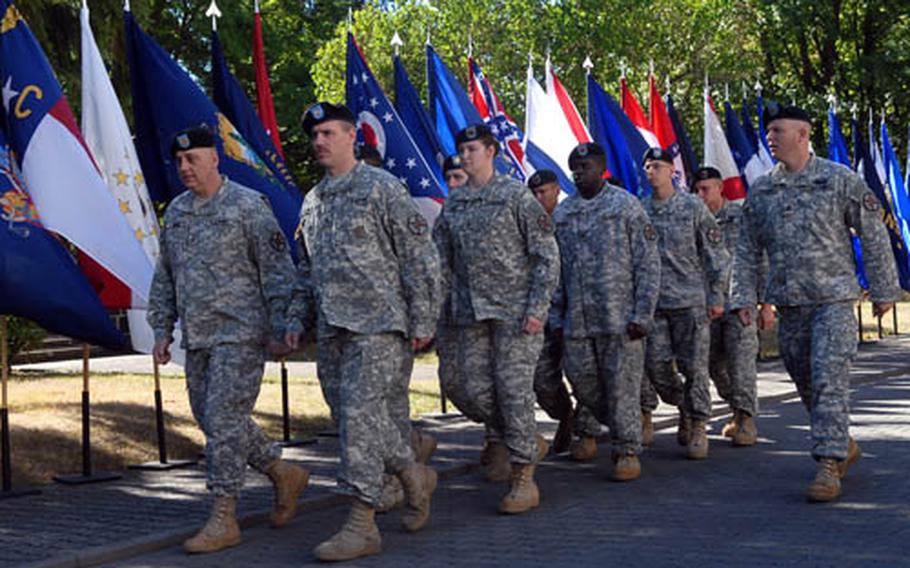 The soldiers of U.S. Army Garrison Darmstadt&#39;s Headquarters and Headquarters Detachment march off after the garrison&#39;s closure ceremony on Tuesday. The American garrison is closing after 63 years in Darmstadt. (Michael Abrams / S&S) 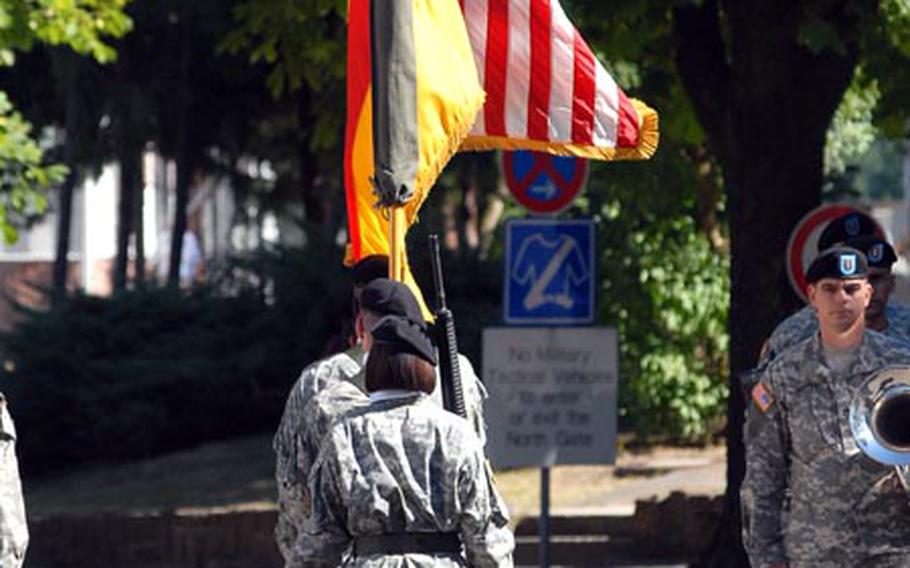 The colors of the U.S. Army Garrison Darmstadt march off into history Tuesday, as the garrison closed for good after 63 years. (Michael Abrams / S&S)

DARMSTADT, Germany &#8212; Armed and battle-hardened, the U.S. Army entered Darmstadt in March 1945. Much of the city was in ruins, and neither the Germans nor those scruffy Americans had a clue as to what tomorrow would bring.

Little did anyone know that the "Amis," a commonly used term for Americans, would hold tight for 63 years, a presence that effectively ended Tuesday when the Army held a formal closure ceremony of its bases there. Elements of the 66th Military Intelligence Brigade and the Defense Threat Reduction Agency will remain awhile longer.

"How does one sum up in a few short minutes the many memories built upon more than 60 years of friendship?" asked Lt. Col. David W. Astin, the community commander.

Invoking the words of Albert Schweitzer, an Alsatian philosopher, Astin noted "that the important things in life are the signs of love and friendship that we leave behind when we go away."

Darmstadt&#8217;s farewell ceremony fell on a picture-perfect day: cloudless and warm with a slight breeze and little humidity. A few hundred people attended the event, which included music, speeches and a fine spread of food and drinks. There was cake, too. Someone even had the presence of mind to invite a chimney sweep, a symbol of good luck in Germany.

"I am impressed and sad that we lose friends in our town," Darmstadt Lord Mayor Walter Hoffmann said as he made his way to the makeshift fest area. "That&#8217;s the great problem."

In recent years, soldiers based in Darmstadt primarily served in either the signal or air defense field. Air Force personnel also were assigned to Darmstadt, as well as an engineer battalion and other assorted units, from aviators to vets.

The closure "is a sad thing," said 78-year-old Larry Ford, a retired Army staff sergeant whose ties to Darmstadt hark to the Eisenhower administration. "We&#8217;ve gotten so used to everything."

"Just seeing the transformation, it is kind of heartbreaking," Johnson said. "I met a lot of friends on both sides. Now all we will have left is the memories."