Amid US plans for continued Asia presence, a shrinking submarine fleet The fast-attack sub USS Hawaii remains in port at Yokosuka Naval Base after on Aug. 22, 2014, arriving from Hawaii two days earlier. (Erik Slavin/Stars and Stripes) 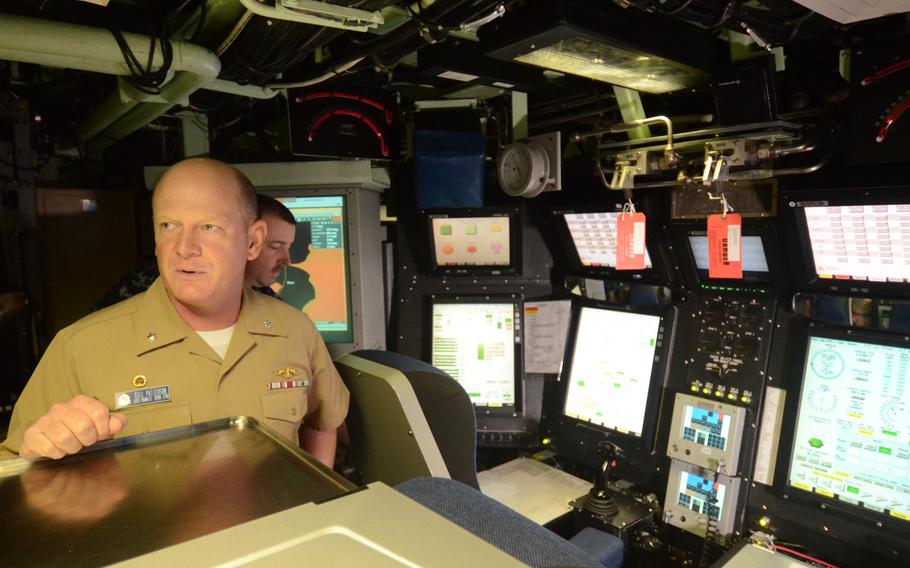 YOKOSUKA NAVAL BASE, Japan — The U.S. Navy bills its submarine fleet as the world’s most advanced, a boast that few in the Asia-Pacific region would argue.

Submariners can collect intelligence, protect surface ships and launch Navy SEAL teams in a region brimming with international tensions — all with minimal chance of detection.

However, the one thing that the U.S. fleet hasn’t been able to do is escape the realities of both age and cost.

The U.S. Navy’s attack submarine fleet is slated to drop steadily from 55 currently active to 41 by 2028, according to the service’s most recent shipbuilding plan.

Even at a projected rate where the Navy acquires 22 of its $2 billion Virginia-class subs by 2028, the numerous Los Angeles-class submarines built during the 1970s and 1980 are running out of time too quickly to keep pace.

In the 2020s, the fleet’s 14 nuclear ballistic missile submarines will also need replacement. At this point, no one in Congress or the Pentagon is sure where the estimated $95 billion to build 12 new boats will come from.

It’s difficult to quantify the effect of an attack submarine deficit on the Navy’s daily mission, because the “silent service” doesn’t talk about its operations. However, the Navy’s deployments in recent years included regular visits to the South China Sea, where $1.2 trillion in annual U.S. trade transits. The sea is also the center of tensions and repeated low-level skirmishes over territory between China and multiple U.S. allies.

The looming reality of fewer submarines could fuel skepticism over whether the United States can afford to make the Asia-Pacific region its top long-term priority, as Pentagon leaders have said they would.

“The U.S. is already doing so much in the region, but no matter how many times the U.S. says it’s committed to the region, still there are doubts,” said Ian Storey, senior fellow at the Institute of Southeast Asian Studies in Singapore.

Those doubts arise largely from the country’s budget woes — Congress still hasn’t found a solution to sequestration, a set of automatic budget cuts that has resulted in Defense Department civilian furloughs and reduced operations. Even without sequestration, there are no plans for big defense spending increases.

That bodes poorly for the Navy’s 30-year shipbuilding plan. The plan that allows for up to two new Virginia-class subs per year and Ohio-class replacement assumes about $19 billion in annual shipbuilding funds during several of those years — $6 billion more per year than the Navy’s historical adjusted average.

“The new shipbuilding plan lacks the resources to be anything more than a piece of paper,” said Rep. Randy Forbes, R-Va., chairman of the House Armed Services seapower subcommittee, after the plan’s release in July.

Submarine officials say they are already planning for reduced numbers in the coming years.

“There are measures that we can take to get even more out of the submarines than we do,” said Rear Adm. Stuart Munsch, commander of Submarine Group 7, while aboard the fast-attack submarine USS Hawaii on Friday. There are uncertainties as to the threat in the future, and so we’re working to match up those two.”

One possibility is that submarine patrols will get longer, said Cmdr. William Patterson, USS Hawaii’s commanding officer. Many surface ships now regularly head to sea for seven or eight months, while attack submarines still generally stick to a six-month deployment, barring an emergency.

It’s also likely that if forced to choose, the Navy will sacrifice submarine missions on other regions to support the Pacific. The submarine fleet has already based 60 percent of its fleet in the Pacific, a move the surface fleet won’t make until 2020.

South Korea and Japan both plan significant increases to their submarine numbers. The U.S. also works with submariners from Australia and Malaysia, and has had discussions with Thailand as they consider building a submarine program. Military relations have also warmed with Vietnam, which is acquiring six Russian Kilo-class submarines.

“It’s a combined effort among like-minded countries,” he said. “We’re concerned about maintaining freedom of navigation and over-flight … the global economy is very dependent on that.”

Most countries in the region share that philosophy, but China does not. It maintains ambiguous claims to 90 percent of the South China Sea, and its ships rammed several Vietnamese ships positioned near the disputed Paracel Islands this summer. Meanwhile, China declared an air defense identification zone over the Japanese-administered Senkaku Islands, which China claims as the Diaoyu.

The U.S. tries to place enough of its advanced military assets in the region – subs included – to show allies that it’s committed to the regional security structure it has dominated since WWII. At the same time, they don’t want to overdo it, Storey said.

“How do you reassure friends and partners in the region without increasing tension with China and having a counterproductive response? There’s no easy answer.”