Amid protests, wreckage is removed from scene of Okinawa copter crash 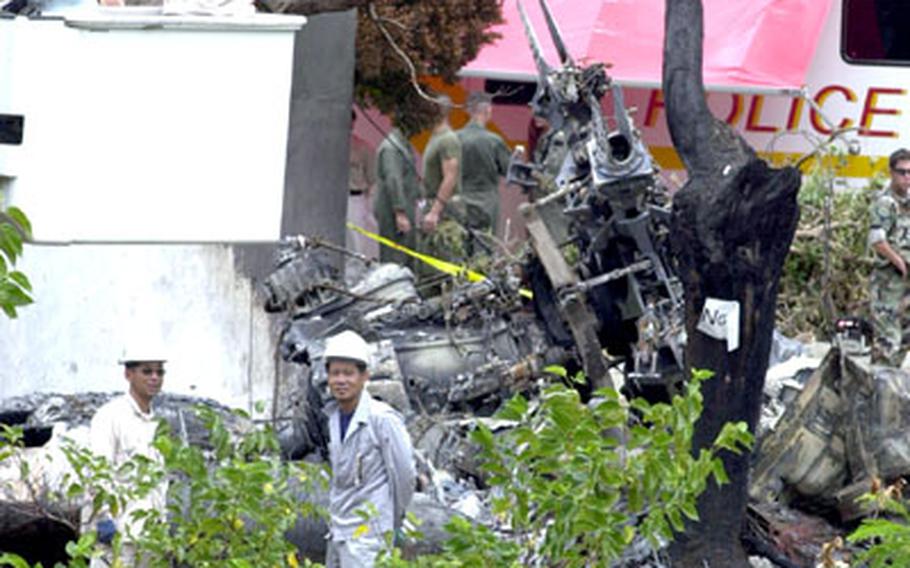 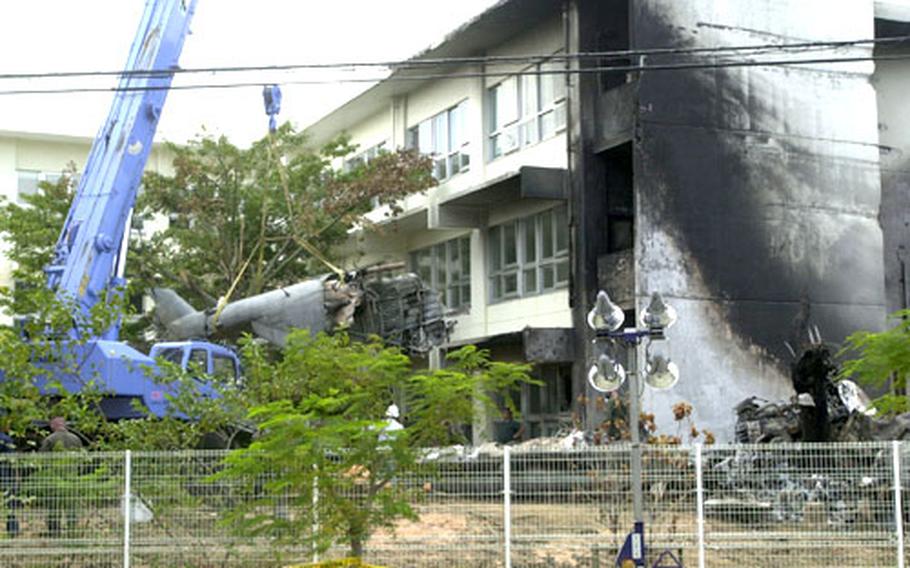 The tail section of the CH-53D Sea Stallion is removed from the crash site. (Fred Zimmerman / S&S) 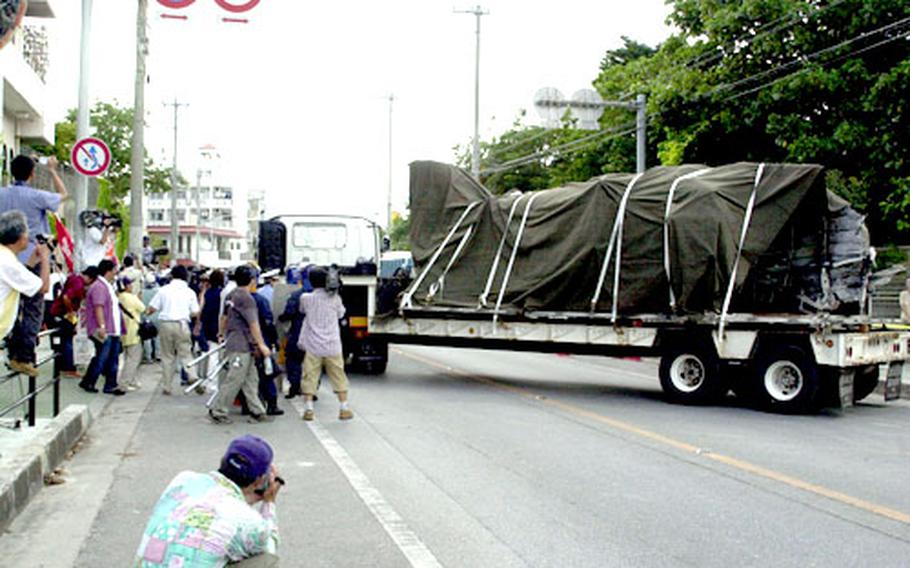 Protestors and media begin to flood the street as the flatbed truck carrying the tail of the CH-53D leaves the grounds of Okinawa International University. (Fred Zimmerman / S&S) 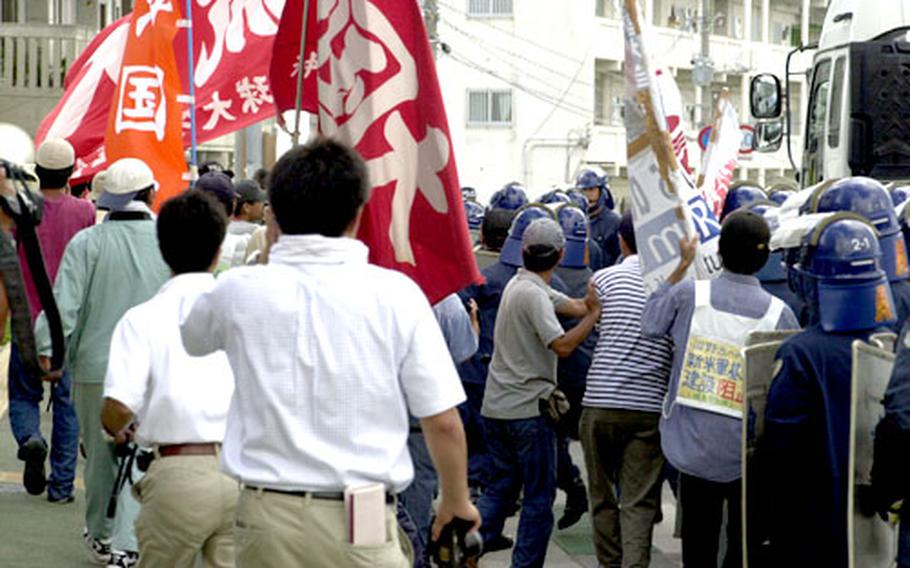 Protestors chase the truck carrying the tail section of the CH-53D. They ventured into the street several times, only to be pushed back by Okinawa riot police. (Fred Zimmerman / S&S) 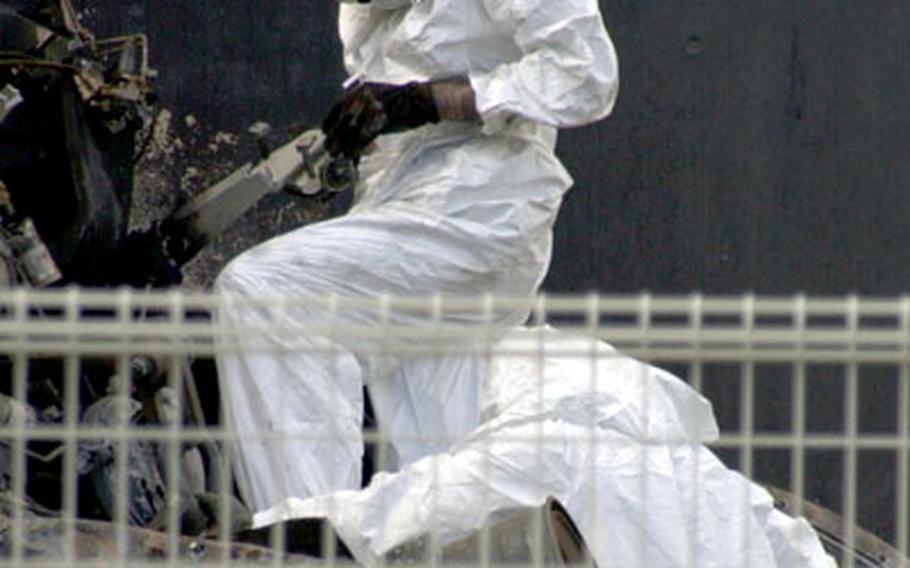 Marines dressed in protective suits and masks prepare the gear box of the CH-53D helicopter for removal. (Fred Zimmerman / S&S)

GINOWAN, Okinawa &#8212; Marines on Monday began to remove the wreckage of a CH-53D Sea Stallion helicopter that crashed on the grounds of Okinawa International University.

As a small group of protesters demonstrated nearby demanding the closure of Marine Corps Air Station Futenma, the work crew of civilians and Marines from the base cut down trees in preparation for using a large crane to lift the wreckage from the base of a building the helicopter clipped Friday.

The protesters gathered on the sidewalk across the street from the main crash site, shouting slogans in Japanese and English.

At one point, Marines in white protective suits and masks climbed into the wreckage to prepare for the removal of the gearbox. After the tail section was removed, they hosed down the remaining wreckage.

Later in the day, as a flatbed trailer hauled away the tail section, which had been covered with a tarp, about 20 of the protesters chased after it, shouting slogans and carrying protest banners. Each time they attempted to run in the street, they were pushed back by Okinawa riot police.

The school is just outside the Marine air base&#8217;s fence line. The helicopter went down about 2:20 p.m. Friday after a tail rotor failure, according to Okinawa police.

Marines have been careful not to speculate publicly on the cause of the crash. Late Friday Marine Lt. Gen. Robert R. Blackman, the Okinawa area coordinator and III Marine Expeditionary Force commander, stated the crash occurred during routine training and was caused by &#8220;some type of mechanical failure.&#8221;

All flights were suspended during the weekend for safety inspections. All CH-53s remained grounded Monday as each was given a thorough safety check.

Okinawa prefectural police said they were told the cause of the crash most likely was a tail rotor failure that made it impossible for the pilot to control the aircraft. Police said witnesses saw the tail rotor and its vertical support fin detach and fall to the ground some 370 yards south of the main crash site.

The three crewmembers, all based in Hawaii and on Okinawa for a six-month deployment for training, survived the crash. Two were treated at the U.S. Naval Hospital for minor injuries. The pilot was admitted in critical condition Friday night and upgraded to stable condition on Saturday.

Their names and the nature of their injuries have not been released. They&#8217;re attached to Marine Medium Helicopter Squadron 265 at MCAS Futenma.

Okinawa police said they still awaited the Marines&#8217; action on their request, made Friday, to examine the wreckage as part of their investigation into the crash.

&#8220;As of 4 p.m. Monday, we have heard nothing from the military concerning our request,&#8221; said a police spokesman at the Okinawa prefectural police headquarters in Naha.

Under the U.S.-Japan status of forces agreement, the U.S. military has primary jurisdiction over accidents involving U.S. military personnel on official duty.

Ginowan Mayor Yoichi Iha, who wants the Marine base closed within five years, said Monday he was upset flight activity had resumed at the base, which lies in the middle of his heavily developed city.

&#8220;There is absolutely no way for us to accept resumption of aircraft operations,&#8221; Iha told the general.

The general said he deeply regretted the fear and anxiety the accident caused city residents. &#8220;We are extremely thankful that none of your citizens were injured,&#8221; Flock said.

&#8220;If the military takes the accident lightly because there was no fatality, it is a completely wrong perception,&#8221; Iha retorted. &#8220;It is a miracle that no one died. The accident proved how dangerous the air station is &#8212; it showed us that Futenma is a defective air station, therefore no aircraft operations should be conducted.&#8221;

Iha said he did his homework and cited a U.S. congressional report made in October 2002 that identified CH-53s as having low accident rates. &#8220;Therefore, if the helicopter with the lowest accident rate fails, what of the other helicopters?&#8221; he asked.

&#8220;The helicopter involved in this accident flew about 300 to 400 meters after it started having trouble until it crashed,&#8221; he said. &#8220;During that time, it flew over densely populated areas.

&#8220;The fear our residents experienced is something that will be impossible to erase from their minds,&#8221; he said. &#8220;From now on they will live in growing unrest each time a helicopter flies over them.&#8221;

Chiyomi Sumida and Fred Zimmerman contributed to this report.