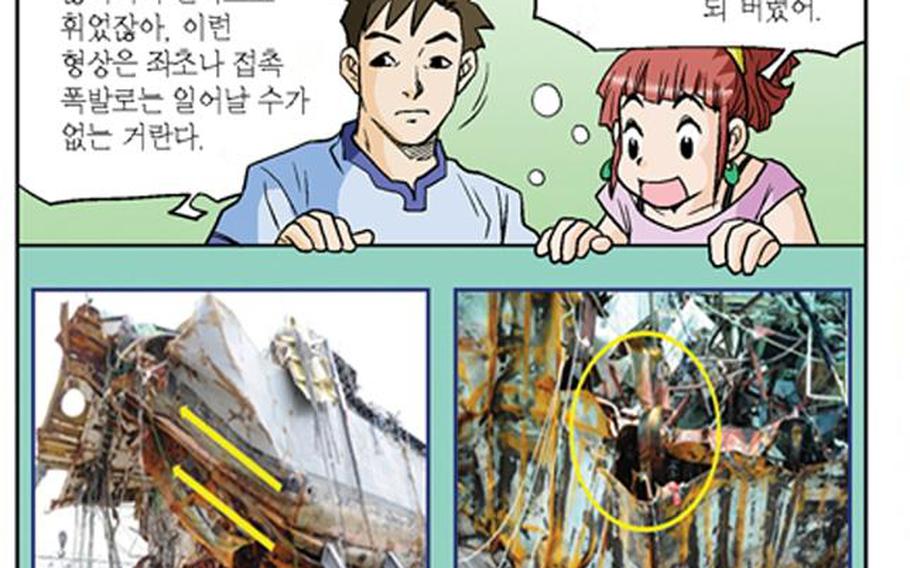 In a comic book released by South Korea's Ministry of National Defense, the character Ho-ryong, a South Korean journalist, explains to his fiancee, Eun-hye, that only a torpedo blast could have cause the upward bending of the metal on the Cheonan. (Courtesy of the South Korean Ministry of Defense)

In a comic book released by South Korea's Ministry of National Defense, the character Ho-ryong, a South Korean journalist, explains to his fiancee, Eun-hye, that only a torpedo blast could have cause the upward bending of the metal on the Cheonan. (Courtesy of the South Korean Ministry of Defense) 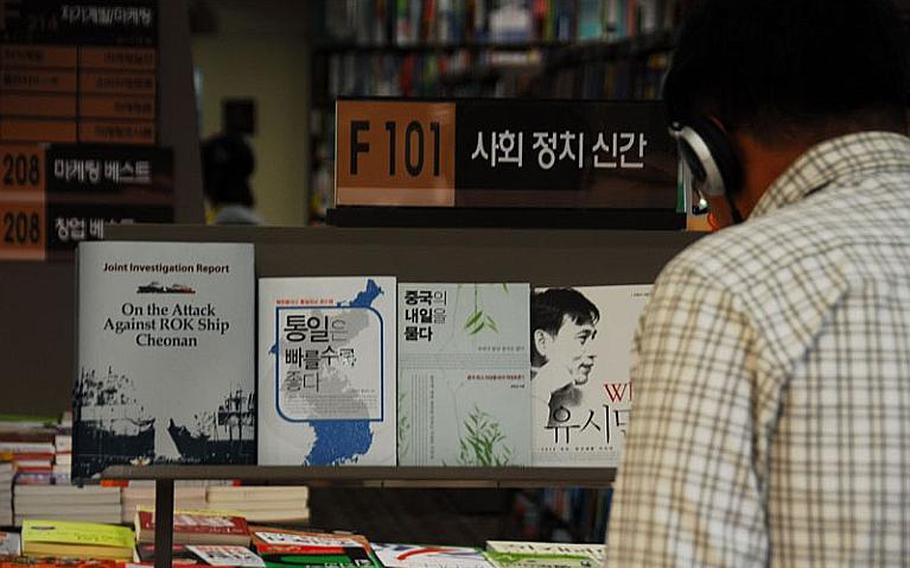 A man browses at Bandi and Luni's bookstore in Seoul that offers a copy of the South Korean-led joint investigation report, 'On the Attack Against ROK Ship Cheonan.' The full report, which blames a North Korean torpedo for sinking the ship, was released to the public on Sept. 13. South Korea and the U.S. will hold an anti-submarine warfare exercise from Sept. 27-Oct. 1 in response to the Cheonan sinking, which the investigation blames on a North Korean torpedo. (Ashley Rowland/Stars and Stripes) A copy of the South Korean-led joint investigation report, 'On the Attack Against ROK Ship Cheonan,' is on display at a Bandi and Luni's bookstore in Seoul. South Korea and the U.S. will hold an anti-submarine warfare exercise from Sept. 27-Oct. 1 in response to the Cheonan sinking, which the investigation blames on a North Korean torpedo. (Ashley Rowland/Stars and Stripes)

SEOUL &mdash; Amid significant skepticism among South Koreans that a North Korean torpedo is to blame for the sinking of a warship, the U.S. and South Korea will conduct joint anti-submarine warfare exercises next week to send a message to the North.

The Yellow Sea exercise is the second in a series prompted by the sinking of the South Korean navy ship Cheonan six months ago.

The exercise, which kicks off Monday and wraps up Friday, is &ldquo;designed to send a clear message of deterrence to North Korea,&rdquo; according to a U.S. Forces Korea news release.

A South Korean-led international investigation team determined that a North Korean torpedo fired from a midget submarine sank the Cheonan in the Yellow Sea, known as the West Sea by Koreans. The March 26 sinking, near a disputed maritime border between the two Koreas, killed 46 sailors.

North Korea has repeatedly denied its involvement in the sinking, in which an explosion ripped the ship in half.

Not everyone, however, is convinced a North Korean torpedo is to blame, according to recent polls of South Koreans.

A poll conducted by Realmeter earlier this month showed 40 percent of South Koreans have doubts about the investigation. Skepticism was highest among the young. Only 27.3 percent of those in their 20s said they believe the investigation report. Of those 50 and older, nearly 60 percent said they trust the report, according to the poll, which had a 3.7 percent margin of error.

In a poll conducted in July, Seoul National University&rsquo;s Institute for Peace and Unification Studies found that South Koreans are split in their opinions of the investigation results.

Russia, which conducted its own investigation into the sinking, also doubts that North Korea is to blame. According to South Korean media reports, Russia &mdash; which has refused to publicly release its investigation results &mdash; concluded that a mine likely caused the blast, possibly after the Cheonan became tangled in a net.

Daniel Pinkston, a Seoul-based analyst with the International Crisis Group, said that while Russia&rsquo;s investigation was credible, a mine placed in those waters decades ago would not have had the explosive power to cause the amount of damage the ship received.

To counter skepticism, South Korea&rsquo;s defense ministry released hard-bound copies of its investigation report in both English and Korean on Sept. 13 for sale in book stores. It also released a comic book that outlines the government&rsquo;s case against North Korea through the character of a journalist in the story who investigates the sinking and successfully convinces his fiancee that a North Korean torpedo was to blame. The comic book &mdash; whose cartoons are interspersed with real Cheonan wreckage photos &mdash; is being distributed for free to schools, libraries and public offices, a defense ministry spokesman said.

Pinkston said the government&rsquo;s report leaves some questions unanswered, such as how a blue marking on a recovered torpedo fragment that read &ldquo;No. 1&rdquo; in Korean was able to survive the blast and being submerged in water.

A bungled public response to the sinking also created doubt among South Koreans. The government&rsquo;s errors ranged from knowingly presenting the diagram of the wrong torpedo during a May press conference held to announce the investigation results, to not fully briefing opposition party members on the investigation, Pinkston said.

&ldquo;You can&rsquo;t know with 100 percent certainty, but any alternate explanation is not plausible,&rdquo; he said.

The exercise will coincide with a rare meeting of North Korea&rsquo;s Workers&rsquo; Party, in which dictator Kim Jong Il is expected to take steps towards naming his son, Kim Jong Un, as successor. That meeting begins Sept. 28, but the exercise was not timed to overlap with the event, said USFK spokesman David Oten.

&ldquo;In no way, shape or form was that a consideration,&rdquo; he said, adding that the exercise was planned based on when naval assets were available.

The exercise was originally scheduled to be held Sept. 5-9, but was delayed because of a typhoon.

Ellen Im contributed to this story.