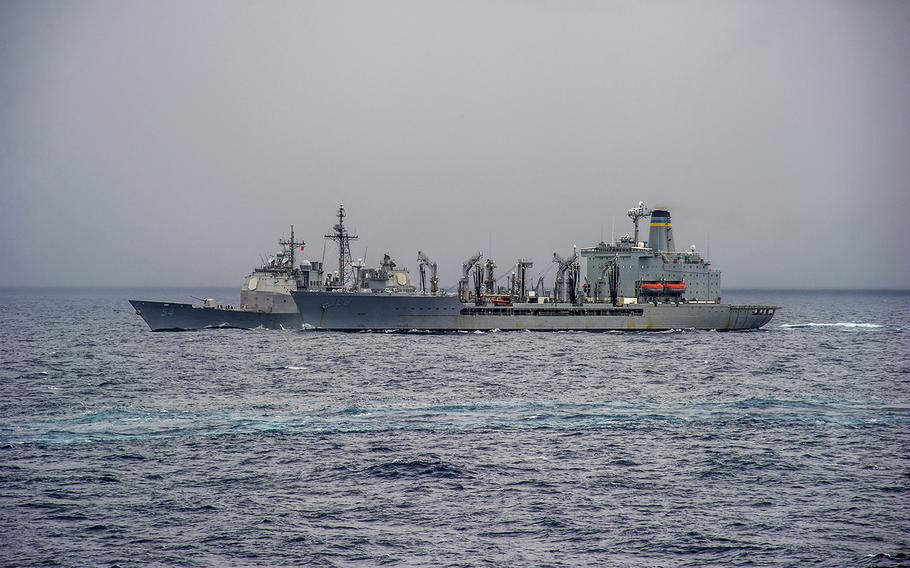 SINGAPORE – China and the United States exchanged relatively measured words at this year’s Shangri-La Dialogue, but each country also made it clear that nothing is changing about their conflicting views over ongoing tensions in the South China Sea.

The United States and some of its allies will continue flying over and sailing through what they consider the international commons, but which China believes to be its sovereign territory. China will keep turning reefs and rocks claimed by three other countries and Taiwan into artificial islands, despite U.S. Defense Secretary Ash Carter’s call for all nations to halt construction in the interest of reducing tensions.

The 14th annual dialogue drew top defense officials from all over Europe and Asia, each of which expressed concerns that the air and sea standoffs made common in recent years might turn violent, endangering not only peace, but more than $5 trillion in yearly global sea trade.

As positions over territory and movement hardened, several nations called instead for new agreements and diplomacy aimed at preventing flare-ups in the South China Sea.

“We must all work together to provide clarity, sooner rather than later – if not on principles or law, then on procedures and practices that maintain regional stability and restore confidence and trust,” Singapore defense minister Ng Eng Hen said on Sunday.

However, clarity proved to be in the eye of the beholder at the summit.

Adm. Sun Jianguo, the Chinese military’s deputy chief of staff, referred to China’s position on the South China Sea as “clear, consistent and firm” on Sunday, without answering several questions posed by summit delegates asking him to clarify China’s reasoning.

Sun declined to answer a question on the meaning of the “9-dash line,” a line on a territorial map of China drawn through about 90 percent of the South China Sea. It remains unclear what rights China claims in what most nations consider international waters and airspace.

Sun also sidestepped a question on China’s declaration of a “military alert zone” – a term that doesn’t exist within international law – when a U.S. Navy P-8 surveillance plane flew near reefs occupied by China in May.

“There’s an increasing dissonance between what China says at the summit and what everybody else says -- it’s just their entire approach,” said Alexander Neill, Shangri-La Dialogue senior fellow for Asia-Pacific security. “Admiral Sun’s responses were scripted. He had a portfolio of stock responses to what he was asked.”

Sun’s speech was somewhat mild in rebuking the U.S., whom China regularly blames for stirring up problems with its smaller Asian neighbors.

Carter’s speech on Saturday, while critical of China for flouting international law, was measured enough in tone to give the Chinese delegation “a palpable sense of relief,” Neill said.

Carter attacked China’s construction of 2,000 acres of new land in the South China Sea, much of which occurred on top of submerged reefs that aren’t considered national territory under maritime law.

“Turning an underwater rock into an airfield simply does not afford the rights of sovereignty,” Carter said Saturday.

Carter added that the U.S. military would fly and sail wherever international law allowed, despite Chinese objections to “close-in” surveillance. But Carter didn’t focus on China alone.

“The Carter speech was quite well-calibrated,” said James Hackett, editor of The Military Balance, an annually published book detailing the world’s military capabilities. “He talked about the amount of [land] reclamation that’s going on by China, but also that they’re not the only nation that’s been doing it.”

The U.S., China and nearly every nation in attendance also voiced support for a code of conduct that would regulate encounters in the South China Sea. However, that proposal has languished for years amid competing national interests and accusations of stalling aimed at China.

For now, the U.S. sea strategy is a mix of patrols and closer defense relations with smaller nations involved in the dispute.

Sen. John McCain told reporters at the summit on Saturday that a bill to ease a Vietnam arms embargo would likely reach the Senate floor next week, focusing on defensive weapons “that could be used in case of a crisis between Vietnam and China.”

Last year, larger Chinese coast guard ships and Vietnamese fishing vessels repeatedly collided with each other near the Paracel Islands, which China occupies and Vietnam claims.

Congress has also included in a spending bill an additional $425 million for exercises and military equipment for nations like the Philippines, U.S. officials announced at the summit on Saturday.

The following day, Sun delivered stern words to countries that would likely benefit from the U.S. funding.