Amid Belgium base closures, efforts under way to keep WWII-era museum open 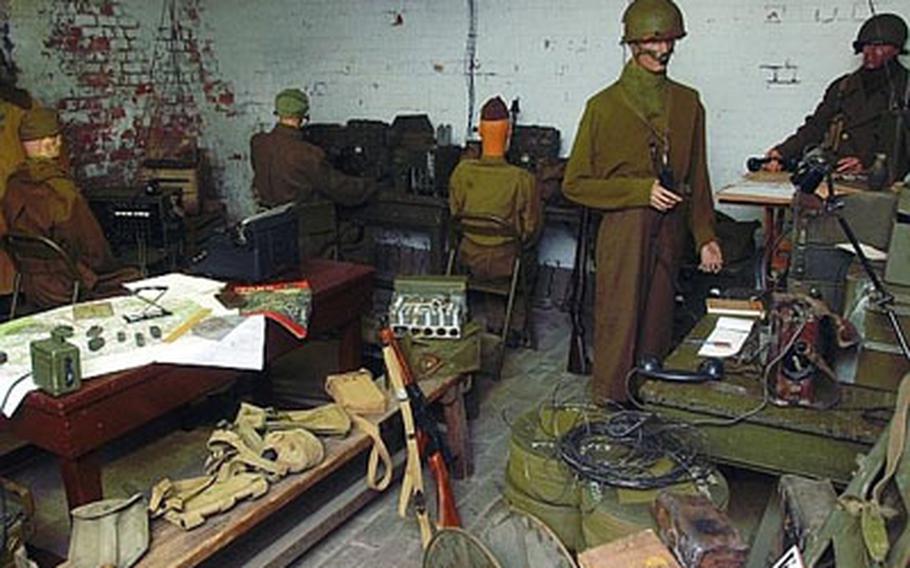 Mannequins depict a scene from McAuliffe’s Cave at a small museum in the basement of a building on Heintz Caserne in Bastogne, Belgium. (Kevin Dougherty/Stars and Stripes)

BASTOGNE, Belgium &#8212; The Belgian army caserne that served as the headquarters of the 101st Airborne Division during the Siege of Bastogne is under the gun again.

Last month, the Belgian Defense Ministry announced a restructuring plan that recommends closing 23 bases by the end of 2011. On the list is Heintz Caserne, where U.S. Army Brig. Gen. Anthony McAuliffe uttered his legendary retort, "Aw nuts!" to a German demand for his surrender during the Battle of Bulge.

Sentimentality aside, it&#8217;s unlikely Belgian officials will change their minds about Heintz Caserne, said Defense Ministry spokesman Kurt Verwilligen, because Belgium has too many military bases and not enough people to fill them.

Instead, the plan is to close the caserne but preserve the red-brick building, particularly the cellar, where McAuliffe and his staff coordinated the city&#8217;s defense. The Royal Army and Military History Museum in Brussels will assume responsibility for it once the Belgian army vacates the premises, Verwilligen said.

"We won&#8217;t abandon the building," Verwilligen said. The cellar, often referred to as McAuliffe&#8217;s Cave, "is part of the history of Belgium."

Despite being encircled for a week and suffering heavy casualties &#8212; 3,000 by some estimates &#8212; McAuliffe&#8217;s men held the city until elements of the 3rd Army punched through on Dec. 26, 1944. To this day, Bastogne remains an inspiring symbol of resolve and fortitude lauded by thousands of people each December.

It&#8217;s against this backdrop that city organizers are preparing to mark the 65th anniversary of the Battle of the Bulge, the Army&#8217;s largest land battle of World War II. The city has formally invited President Barack Obama to the Dec. 12 commemoration. Presidential invitations are not the norm in Bastogne, but Obama is expected to be in Oslo, Norway, to accept the Nobel Peace Prize on Dec. 10.

"The spirit of our two nation&#8217;s citizens on this day demonstrates the undying bond between our Allied nations," Mayor Philippe Collard said in his letter to Obama earlier this month.

No sitting U.S. president has ever visited Bastogne to mark the anniversary, according to Lysiane Thonus, the event organizer. Dwight Eisenhower made it to Bastogne, but that was during the war, shortly after the siege was broken.

Thonus doesn&#8217;t know how many veterans will visit Bastogne during the two-day observance next month. At this stage, most are in their 80s. She indicated that at least several are due to attend a ceremony Saturday, Dec. 12, at the Mardasson Memorial, which honors the more than 75,000 Americans killed or wounded in the Battle of the Bulge. The campaign lasted from Dec. 16, 1944, to Jan. 25, 1945.

Besides that ceremony, there will be a historical re-enactment in Bastogne and a larger show in Vaux-sur-S&#251;re, located 10 miles south. Also on Saturday, there will be the annual perimeter walk that starts at 8 a.m., followed by wreath-laying ceremonies and the traditional nut toss from the town hall balcony.

Additionally, the team of volunteers that maintains McAuliffe&#8217;s Cave at Heintz Caserne will open the wartime headquarters to visitors Dec. 11-13. Hours are from 1 p.m. to 6 p.m. Friday, and 8 a.m. to 6 p.m. Saturday and Sunday.

It&#8217;s a modest, musty-smelling museum that holds a lot of meaning.