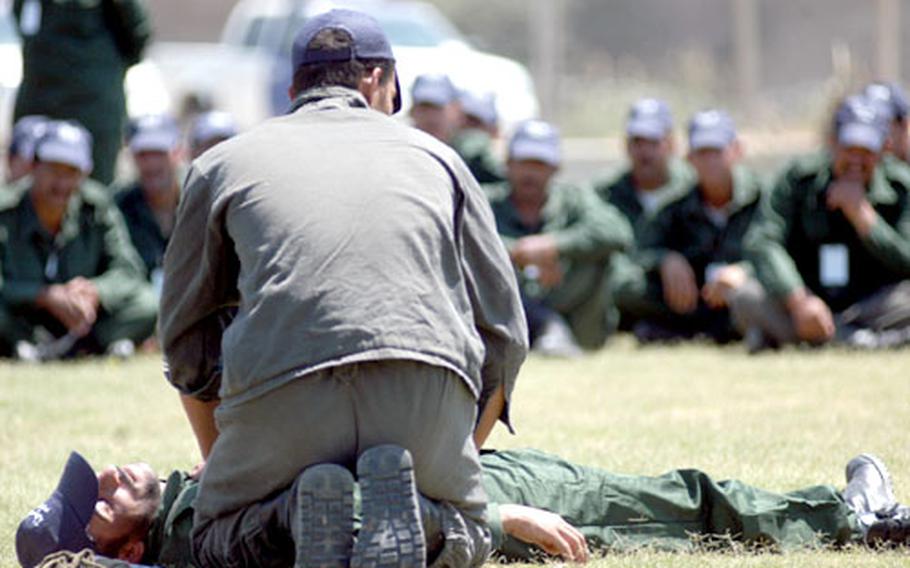 Iraqi police recruits take part in a first aid course at a training center in Tikrit, Iraq. “The walls are coming down,” Army Sgt. 1st Class Joe Kaufman, a trainer, said of the growth of U.S. and Iraqi security relations. (Kevin Dougherty / S&S) 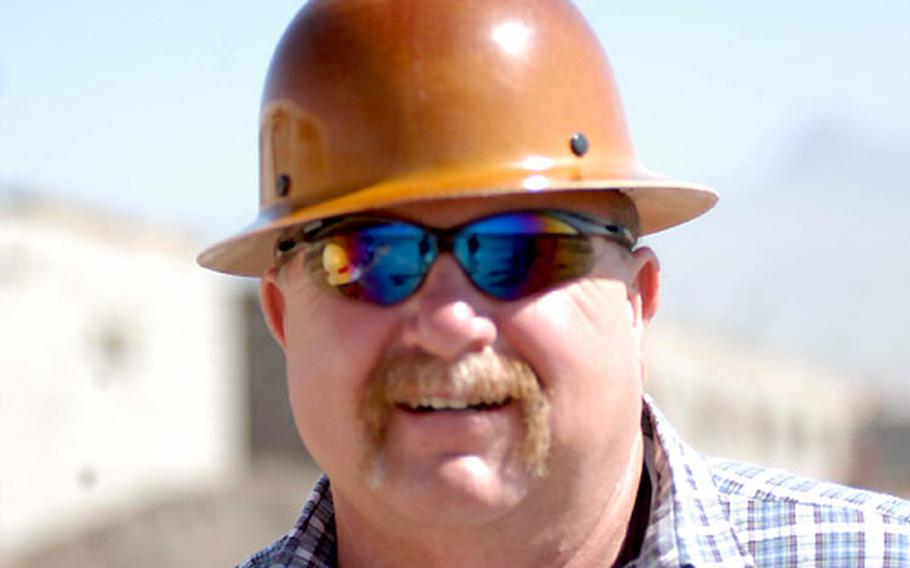 Sonny Sebastian is overseeing a project to build a $16 million academy for the Iraqi Border Police in northern Iraq. (Kevin Dougherty / S&S)

(Second in a series on training Iraqi security forces.)

SULAYMANIYAH, Iraq &#8212; Sonny Sebastian is running ahead of schedule, and he wants to keep it that way.

Sporting an orange hardhat, the 50-year-old Texan ambles from one building to the next to check the progress on the construction of a $16 million academy for the Iraqi Border Police. He talks with a foreman, points here and points there, and then moves on to another supervisor.

Originally scheduled for completion in August, the academy may open next month. Located in Sulaymaniyah in northern Iraq, the 22-building academy will include barracks, a dining hall, classrooms and an armory.

There are hundreds of other major projects for Iraqi security forces that are either completed, in progress or on the drawing board. Of the $5.2 billion already allocated to Iraqi security forces, $1.7 billion has gone toward constructing or improving facilities, said Lt. Col. David Youngberg, an Army comptroller based in Baghdad.

Sebastian&#8217;s academy represents just one piece of a vast puzzle being pieced together by Youngberg and others assigned to the Multi-National Security Transition Command-Iraq, which oversees the training and equipping of Iraqi security forces.

It&#8217;s a Herculean task that involves, either directly or indirectly, every servicemember deployed to Iraq. At the center of it all are the 1,100 military personnel &#8212; 950 of whom are Americans &#8212; assigned to MNSTC-I.

The $5.2 billion the organization currently has on its ledgers came in two separate appropriations. Five billion dollars of that was part of the $18.4 billion Congress approved in November 2003 for Iraqi reconstruction.

Initially, $3.4 billion was set aside for training and equipping Iraqi security forces, Youngberg said. Last year, when the insurgency brought to a standstill many civil projects, from restoring the oil infrastructure to fixing electrical power grids, an additional $1.8 billion was reallocated to MNSTC-I.

That increase allowed the organization to accelerate its work. At the time, one of the expectations was that speeding up the process would lead to greater stability, since more security forces would be trained and equipped.

But the insurgency hasn&#8217;t waned. Since late April, the number of attacks and deaths has risen sharply. Despite the violence, the train-and-equip program has continued unabated.

Last September, when MNSTC-I finished reassessing its matrix for determining who is and isn&#8217;t ready for duty, the number of &#8220;trained and equipped&#8221; Iraqi security forces stood at 96,000. Today, the organization puts that total at more than 168,000, but there are questions about how many of those forces are actually combat ready.

By July 2006, that number is projected to climb to 270,000, with the greatest growth occurring in the support areas, such as transportation and logistics. The money to pay for that side of the equation should be available soon.

In the supplemental appropriations bill signed by President Bush last month, an additional $5.4 billion was earmarked for training, equipment and construction. That money is for expenses through September 2006.

Managing the billions of dollars the United States is spending to overhaul and equip Iraqi security forces is a challenge even the ablest of accountants would find taxing.

That means juggling such issues as whom to hire and where to billet them. There&#8217;s also a multitude of things to buy in terms of equipment, and, lastly, there is the training.

Essentially, every dollar MNSTC-I spends goes toward one of two Iraqi ministries: defense or interior.

By far, most of the defense dollars go toward rebuilding and equipping the Iraqi army, which will have 10 fully manned divisions and other elements, such as base support, signal and engineering.

The procurement list is lengthy, from bullets, guns and vehicles to uniforms, helmets and body armor. There are radios, generators and explosive ordnance equipment to acquire, along with reams of paper. After all, what&#8217;s an army without paperwork?

Expenses on the interior side are a mixed bag, since it involves such diverse entities as local police departments, commando units, highway patrol, borders and emergency services.

&#8220;We are nowhere near the end of the line, but we&#8217;re making progress,&#8221; said a senior coalition official associated with training Iraqi security forces.

Facilities construction is perhaps the most tangible testament to the monumental effort to remake and retool Iraqi security forces. Some units will use existing structures, while others are getting new digs.

For example, plans call for building or repairing about 1,000 police stations at a cost of $256 million, according to Air Force Lt. Col. Stephen Blalock, the executive officer in MNSTC-I&#8217;s engineering office. There will be three facilities for major crime units in Baghdad, including a $1 million forensic lab referred to it as &#8220;CSI Baghdad.&#8221;

Sebastian&#8217;s academy is one of three being built for the Iraqi Border Police. To illustrate the scope of just that one department, MNSTC-I has plans to build or refurbish 254 border forts and 12 ports of entry at a cost of more than $100 million.

The senior coalition official likened the whole endeavor to a cattle drive. At first, he said, there might be some strays, &#8220;but pretty soon, the whole herd is going in the right direction.&#8221;

In typically Texan fashion, Sebastian cut right to the chase.

(PREVIOUS STORY:Turning the fight over to the Iraqis)