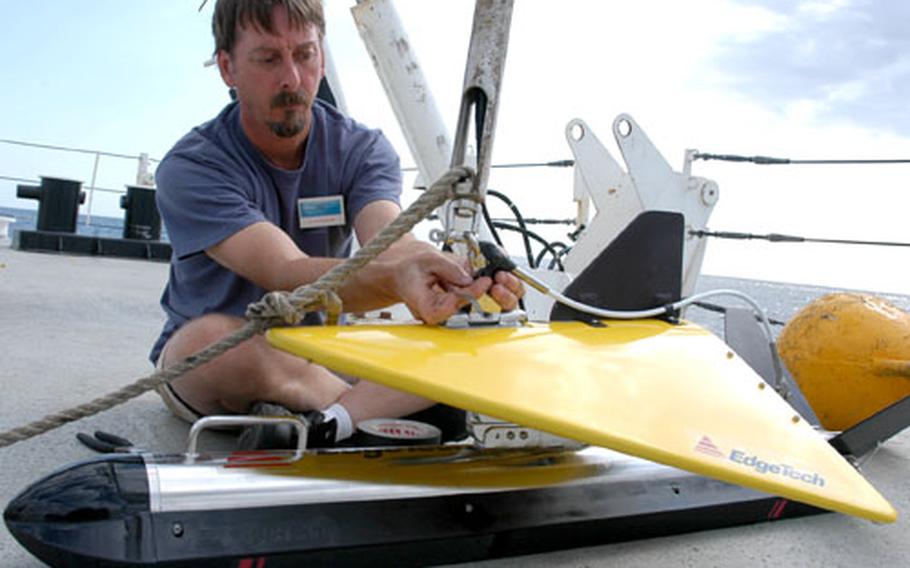 Dave Wright, an engineer with the Institute for Exploration, prepares a side scan sonar for launch this week during a demonstration aboard the USNS Pathfinder in the Black Sea. The side scan sonar uses sound pulses on the ocean’s floor to locate possible shipwrecks. (Jenniffer Rivera / U.S. Navy)

The waters are deep and murky, but with high-tech equipment &#8212; and a little good luck &#8212; U.S. and Ukrainian oceanographers and scientists hope to find a World War II Soviet-flagged hospital ship that was sunk with 7,000 people on board.

The oceanographic survey ship USNS Pathfinder, under Military Sealift Command, started searching Sunday in Ukrainian territorial waters for the SS Armenia, sunk in 1941 by the German Luftwaffe, one of the world&#8217;s most powerful air forces at the time, officials said.

"This would be a significant find," said Marian Clough, senior Naval Oceanographic Office representative on board. "Over 7,000 people died when that hospital ship was bombed from the air. It went down in four minutes and was a serious of loss of life. It is very significant to the Ukrainians. &#8230; There were wounded soldiers on board, and also families, women and children who were allowed to visit the ship, and the crew of the vessel. It was quite a wide group of people."

The Ukrainian Department of Underwater Heritage plans to designate the underwater graveyard a memorial site if the Armenia is located, Clough said.

"There are lots of shipwrecks in the Black Sea, so it&#8217;s a matter of us surveying and seeing something on the &#8230; displays that looks interesting enough to take a closer look," he said.

Scientists will use a side-scan sonar and multibeam sonar, which use sound pulses to locate possible shipwrecks. If sonars indicate a possible wreck, a remotely operated vehicle with video capabilities can be used to verify findings.

"It is the type of work we do all the time," Erwin said during a phone interview from the ship.

Civilian surveyors from the U.S. Naval Oceanographic Office, Ukrainian sailors, surveyors and historians, and a team of civilian oceanographers from the U.S.-based Institute for Exploration are working together on the project.

"After the number of years it has been submerged, there&#8217;s no chance of finding bodies," Erwin said. "There may be bones, but I don&#8217;t think bones would appear on sonar. The sonar will show up the shape of what remains of the hull."

The Pathfinder will be in the Black Sea for just a couple of weeks, Erwin said.

"The Montreux Convention restricts the amount of time spent in the Black Sea," he said. Vessels foreign to the nations that rim the sea can remain there up to 21 days.

If the wreckage is found, the decision of whether to raise it would be up to the Ukrainian government, he said.