Americans, Russians team up for Torgau 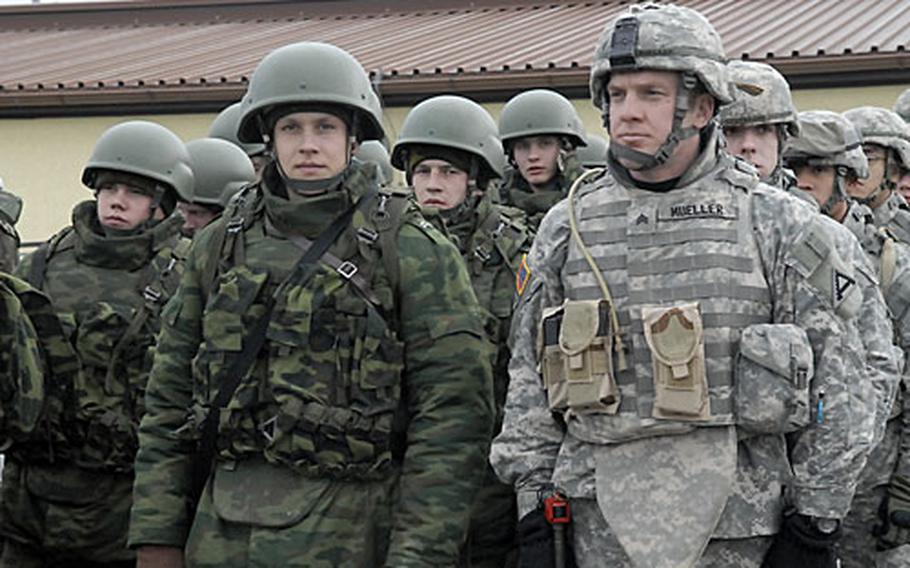 Sgt. Troy Mueler, right, with the 1st Battalion, 4th Infantry Regiment based in Hohenfels, stands in formation next to a Russian soldier during training exercises designed to teach the Russians about American tactics and techniques. (Charlie Reed / S&S)

HOHENFELS, Germany &#8212; As they stood shoulder-to-shoulder in formation Wednesday, it was easy to distinguish the American soldiers from their Russian counterparts, working together in Exercise Torgau.

They were all relatively young men with similar uniforms. But it was the way the respective troops broke off to chat with their own in between orders that defined the distinction.

The language barrier was undoubtedly the biggest factor, but exercise leaders hope the cultural gap narrows by the close of Torgau next week.

&#8220;It&#8217;s exercises like this that set the foundation for future cooperation,&#8221; said senior trainer Lt. Col. Mike Borg, with the Joint Multinational Readiness Center at the Army&#8217;s training area in Hohenfels.

Imparting American operational and tactical techniques to the Russians is at the heart of the exercise &#8212; borne from an agreement between the two former rival nations.

But Borg and other leaders stressed the American-Russian alliance was forged during World War II in Torgau, along the Elbe River in eastern Germany, where the two forces initially met. The successful partnership ultimately deteriorated and set the stage for the Cold War.

It&#8217;s been about eight years since the two militaries last worked together for peacekeeping efforts in Kosovo and Bosnia and Herzegovina. For now, though, the two armies are just practicing.

Torgau is being played out by about 200 soldiers and noncommissioned officers, split about evenly from the two countries.

Working in integrated platoons with translators assigned to each squadron, the all-male forces are engaged in stability, security, transition and reconstruction scenarios. The training culminates in a live-fire exercise next week when Torgau wraps up. During the simulated-combat situation, soldiers and weapons will be linked to laser engagement systems, adding a &#8220;real-world&#8221; element to the exercise and a way to measure soldiers&#8217; effectiveness in the field.

A cultural day along with sporting tournaments this weekend aim to bring the two groups of soldiers, who are eating, sleeping and working together, a bit closer in a more relaxed environment.

Another 200 officers &#8212; half Russian, half American &#8212; also are meeting this week and next in Grafenw&#246;hr, about an hour north of Hohenfels, to discuss American tactics and strategies.

Russian leaders said their soldiers, mostly from Nijhij Nougorod in central Russia, stand to learn a lot from the American troops. Many of the Russians, they say, are new to the military.

Still, when it comes to the rank, leadership and other military attributes, Borg said, &#8220;the similarities far outweigh the differences.&#8221;