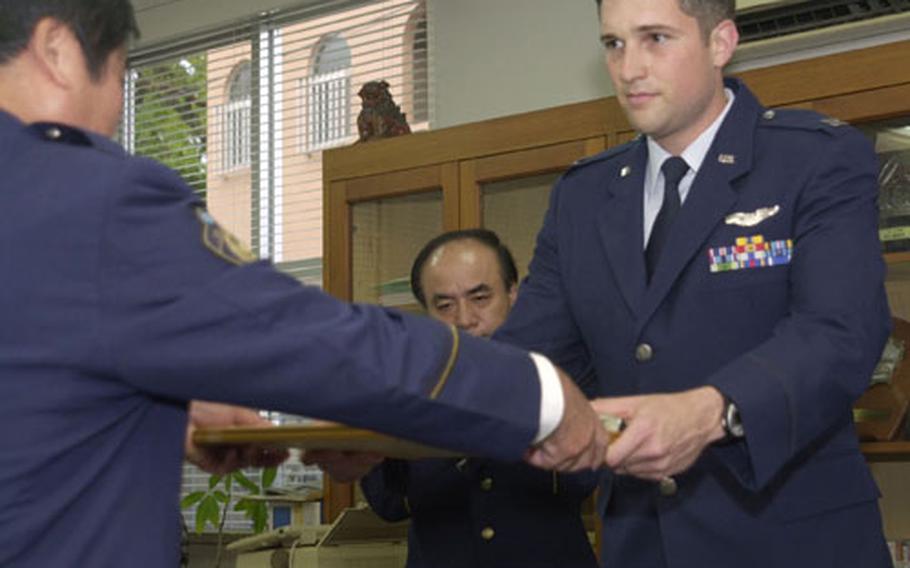 KADENA AIR BASE, Okinawa &#8212; Over the roar of a blaze, frantic shouts reached Capt. Thomas Geiser as he watched smoke billow from a neighbor&#8217;s home April 2.

All its doors were locked, so Geiser squeezed through a broken utility window to enter the burning home and save Tsuguro Miyagi, 94, the lone occupant.

Once inside, the Air Force pilot used his T-shirt as a mask through which to breathe. Unable to open his eyes because of burning smoke, he blindly &#8220;low-crawled&#8221; through the home, he said, bumping into walls and furniture &#8220;like a rat in a maze,&#8221; he said.

Zimber, manager of Camp Foster&#8217;s New Car Sales, said he heard Geiser asking in English if others were in the house. Zimber used his Japanese to interpret and told Geiser that Miyagi was alone.

Geiser said he followed Miyagi&#8217;s voice, eventually slithering his way to the bedroom entrance, where he found the man slumped against a wall.

Taking a deep breath, Geiser got to his feet and carried the man, but he couldn&#8217;t see to find his way back.

Zimber said that through a window he could see a light beam from a flashlight Geiser had taken into the burning structure.

As she began to run to the back of the house, she said, she saw her husband suddenly burst through a door carrying Miyagi in his arms &#8220;like a baby.&#8221;

Geiser and Zimber carried Miyagi to a nearby yard, where they and other neighbors labored to revive him.

Had it not been for their &#8220;brave actions,&#8221; Miyagi would have suffocated from smoke inhalation, the police spokesman said. &#8220;It was solely thanks to their prompt actions that he escaped death.&#8221;

Miyagi was admitted to a hospital for smoke inhalation and minor burns but is in stable condition and expected to be released soon, the spokesman said Wednesday.

The day after the rescue, Okinawa City police officials presented letters of appreciation and glass plaques to Geiser and Zimber, commending them for their heroic actions.

Since the rescue, Miyagi&#8217;s neighbors and relatives have shown an outpouring of appreciation, bowing to the family repeatedly and often, said Daisy Geiser. A week after the incident, she said, she&#8217;s still pulling glass from her husband&#8217;s feet.