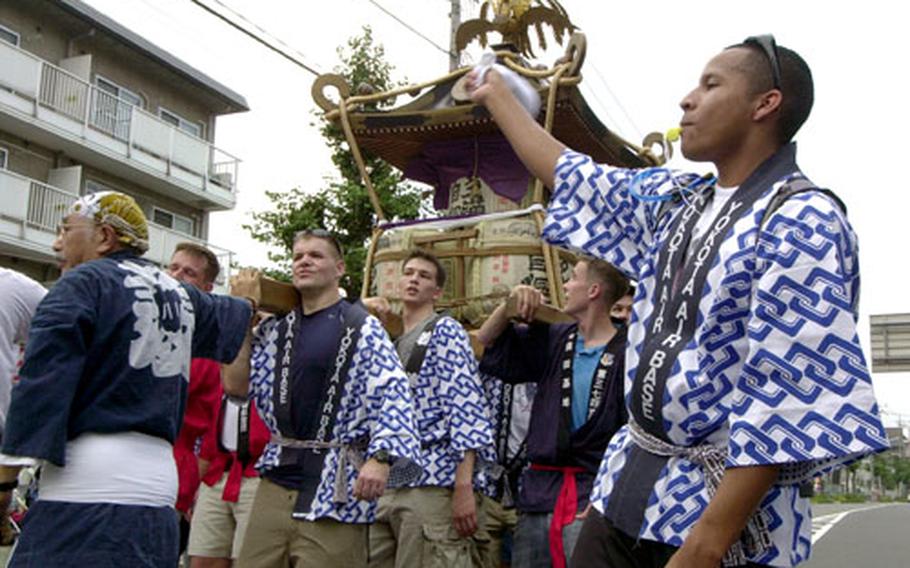 Yokota Air Base airmen carry a 1,000-pound shrine through the Fussa, Japan, streets Friday during the Tanabata festival. The airmen stepped to cadence supported by their own whistlers and percussionists. (Tim Wightman / S&S)

Yokota Air Base airmen carry a 1,000-pound shrine through the Fussa, Japan, streets Friday during the Tanabata festival. The airmen stepped to cadence supported by their own whistlers and percussionists. (Tim Wightman / S&S) 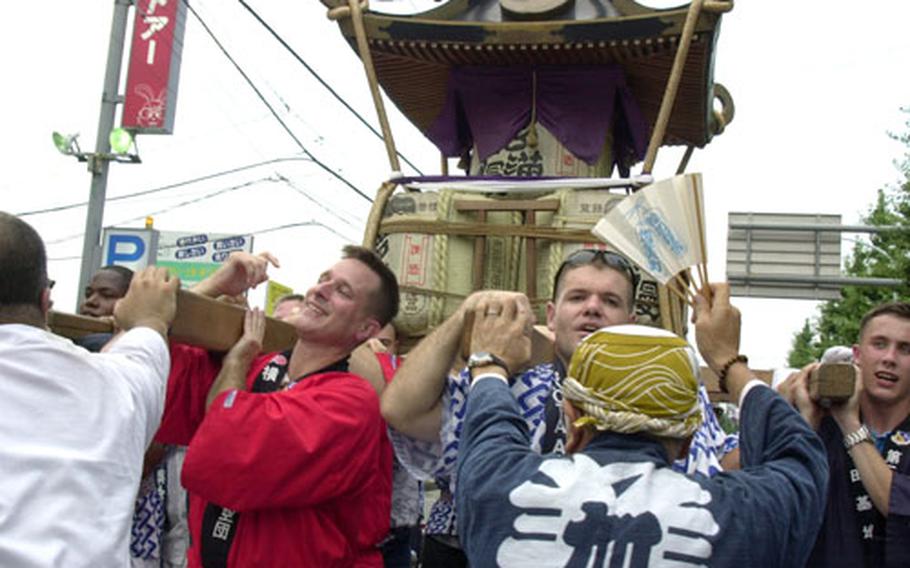 Two Japanese men help direct Yokota Air Base airmen as they carry the shrine through the Fussa streets Friday. The nearly 50 volunteer airmen were cheered on by onlookers during their three-hour trip to Fussa City Hall. (Tim Wightman / S&S) The airmen said they made the three-hour journey to Fussa City Hall in sweltering conditions as a way to show their support for their host nation. (Tim Wightman / S&S) Decorations, food and visitors abound Friday at the 58th annual Tanabata festival, which is based on a legend of two lovers who meet once a year when the stars align. (Tim Wightman / S&S)

FUSSA, Japan &#8212; The Japanese celebrate Tanabata by wearing kimonos, hanging their written wishes on bamboo trees and decorating the trees with origami, or folded paper figures.

Some also cheer on U.S. servicemembers carrying a heavy, wooden shrine down the streets of Fussa.

The noise level created Friday by cheering onlookers at the 58th annual Tanabata festival here in the Tokyo outskirts was rivaled only by the enthusiasm displayed by those same servicemembers from nearby Yokota Air Base.

The nearly 50 volunteers &#8212; dressed in happy coats &#8212; bounced, whistled and chanted their way down the Fussa streets Friday while supporting a 1,000-pound shrine on their shoulders.

The airmen used the celebration, which was to end Sunday, as an opportunity to immerse themselves in Japanese culture, said Col. Mark Baker, commander of 515th Air Mobility Operations Group.

"It shows that [the airmen] really care about getting to know, participate in and understand the culture they&#8217;re a part of," Baker said before the traditional procession.

The Tanabata festival, also known as the "festival of the stars," is usually celebrated in July or August in a number of Japan&#8217;s cities. Based on the Legend of Tanabata, it celebrates the once-a-year meeting of two star lovers separated from each other at opposite ends of the Milky Way.

The group from Yokota got only three breaks during the three-hour trek, and they were needed, according to several participants.

Master Sgt. Warren Ary said he&#8217;s participated in more than 100 similar celebrations during his 12 years in Japan, but they never seem to get any easier. He testified to that by identifying sore body parts during the second break.

Kevin Mitchell, of the Airman and Family Readiness Center, hadn&#8217;t been involved in the shrine carry for the four years. The last time, his job was to blow the whistle and help out with the cadence. This time he was a carrier.